Ljubljana, Slovenia is an undiscovered gem in Europe. Few tourists, lots of beautiful architecture, and a town full of ambiance.  Stroll the parks, listen to music in the squares and enjoy the food & drink enriched by its location as a crossroads between several cultures.

First – how do you say it?  The easiest way for me was to replace the “j’s” with an “eee” sound to not get your tongue-tied. 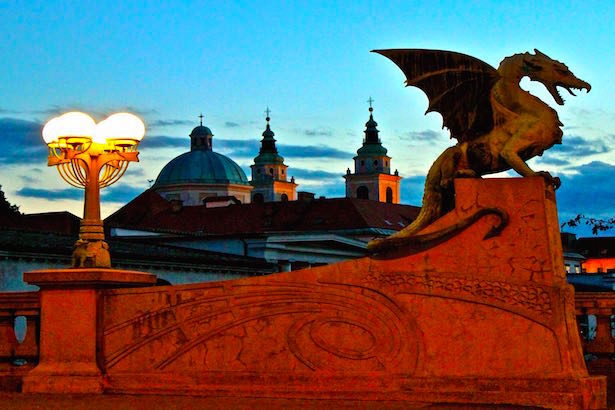 Around 2000 BC, the Ljubljana Marshes in the immediate vicinity of Ljubljana were settled by people living in pile dwellings (Now a UNESCO site). These lake-dwelling people lived through hunting, fishing and primitive agriculture.  The area remained a transit point for numerous tribes including Illyrians and Celts and Illyrians. Around 50 BC, the Romans built a military encampment that later became a permanent settlement called Iulia Aemona of ~6,000 inhabitants that continually did battle with Attila the Hun, the Ostrogoths and the Lombards. The Roman ruins can still be seen in the city center today.

In the 6th century, the ancestors of the Slovenes moved in with raids from the Magyars (Hungarians).  The first mention of the city was in 1161 in a document detailing a castle Ljubljana (castrum Leibach).  Ljubljana’s downtown dates to this time in the view of the Castle.  After the 1511 earthquake, it was rebuilt in the Baroque style following Italian Venetian models. After the quake in 1895, it was once again rebuilt, this time in the Vienna Secession style.

The main Slovene architect of the Vienna Secession Style was Jože Plečnik including the Triple Bridge, Slovene National and University Library building, as well as the embankments along the Ljubljanica River, the Ljubljana open market buildings, the Ljubljana cemetery, parks, plazas etc. His architectural imprint on Ljubljana has been compared to the impact Antonio Gaudi had on Barcelona.  Plečnik also worked in Vienna, Belgrade and Prague Castle.

The city fortunately received very little damage in the World Wars and the Yugoslavian Wars as Slovenia declared its independence.  Today, the city is a vibrant student city with a ton of charm and ambiance.

Top 10 Sites to See in Ljubljana

There are several legends surrounding the Dragons in Ljubljana.  Some say the dragons are from the Greek legend of Jason & the Argonauts and the Golden Fleece. On their return home, they found a large lake surrounded by a marsh between the present-day towns of Vrhnika and Ljubljana and Jason struck down a monster – the Dragon.

Regardless, the dragon has become the symbol on the city coat of arms and flag.  The Dragon bridge was built in 1901 with 4 large dragons at the corners and 16 more dragons on the bridge.  According to local legends, when a virgin crosses the bridge, the dragons will wag their tails. 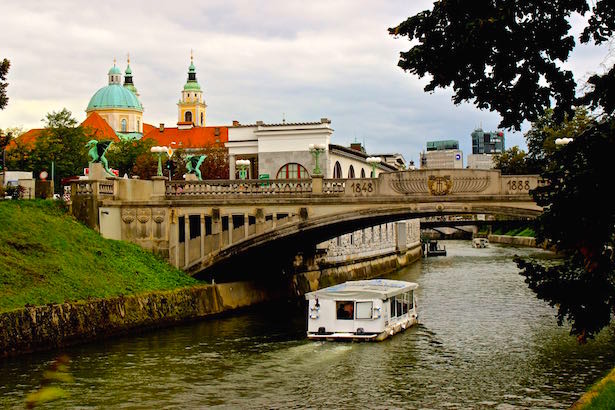 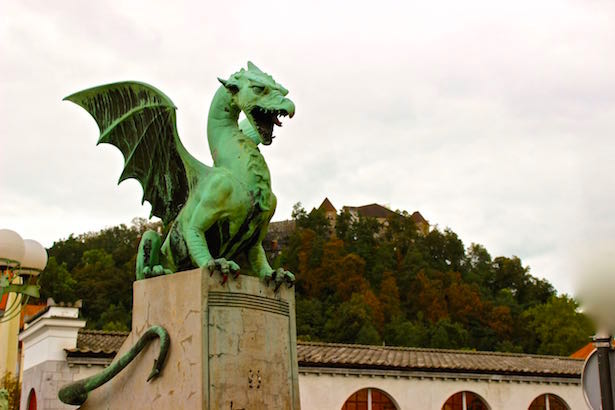 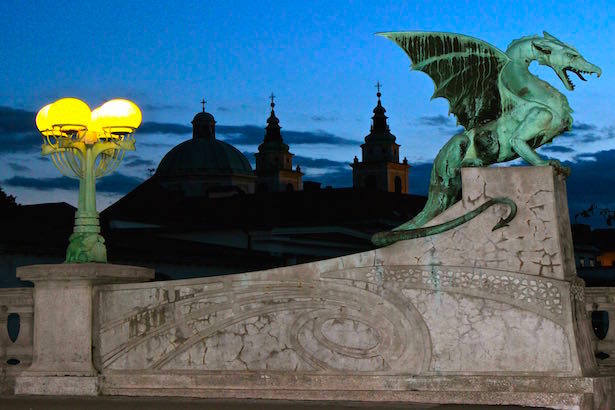 The Central Market has dozens of vendors with everything from fresh fruit, vegetables, flowers, clothing and souvenirs. They also have a milk vending machine, a mlekomat. A local dairy farmer refills the machine with fresh milk once a day and because he owns and operates the machine, there is no middle man between farmer and consumers — just a few buttons and a spout. There are a few easy safety measures.  The machine will stop if the milk rises above a certain temperature & the farmer is alerted. A UV light also sterilizes the milk spout between purchases. A Euro will buy you a full liter, but you can also buy in 20-cent increments for a fresh glass.  The milk is so fresh and you won’t find this in the USA. 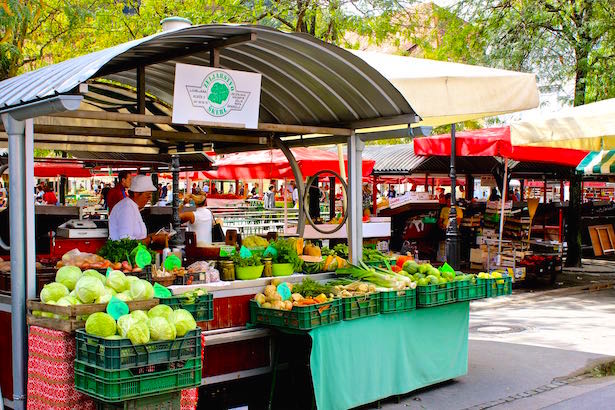 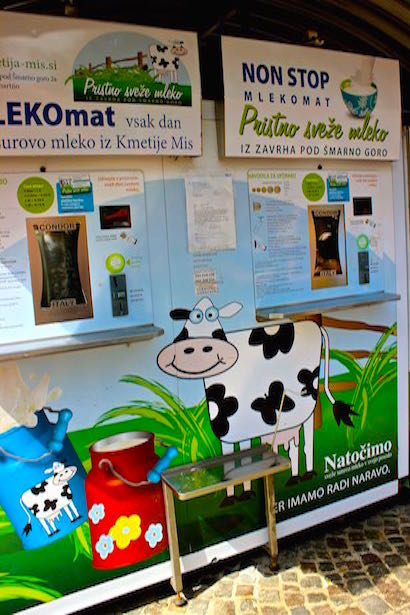 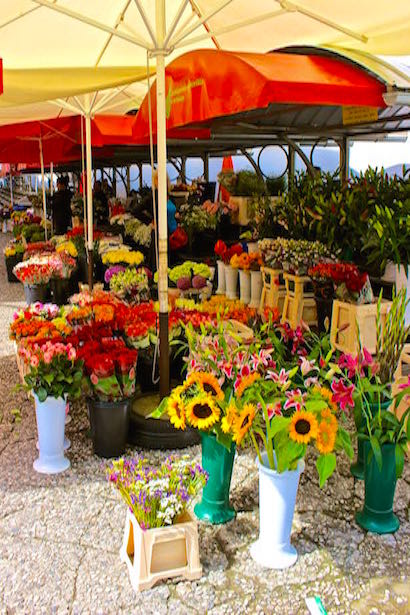 Nearby Central Market is the Butchers’ Bridge, a footbridge crossing the river Ljubljanica River. Opened in July 2010, it completes Plečnik’s plans from the 1930s.  Shortly after the opening, padlocks of couples in love started appearing on its steel wires, symbolizing declarations of eternal love, a phenomenon similar to the one on the Parisian Pont des Arts. 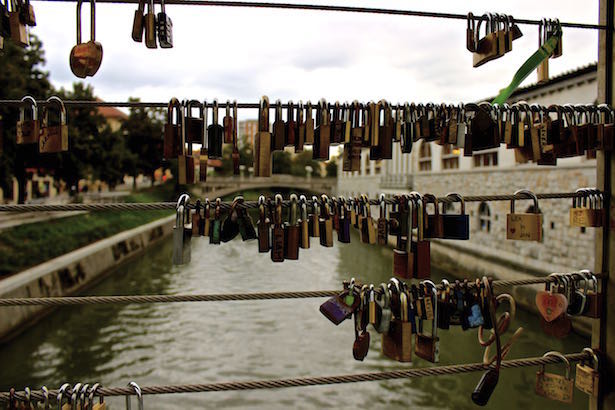 Ljubljana Cathedral, officially named St. Nicholas’s Church was set up in 1461.  The church has had a few renovations through the years from Gothic church to this 18th century Baroque building.  The bronze monumental doors are pretty magnificent. They were made in 1996 just before the visit of Pope John Paul II. The front door, now named the Slovene Door, was created by Tone Demšar with a depiction of Slovene history to commemorate the 1250th anniversary of Christianity in Slovenia. The side door, now named the Ljubljana Door, was redesigned by Mirsad Begić, who decorated them with portraits of the 20th-century bishops of Ljubljana. Inside much of the original Baroque decor remains with frescoes painted by 17th century Giulio Quaglio. 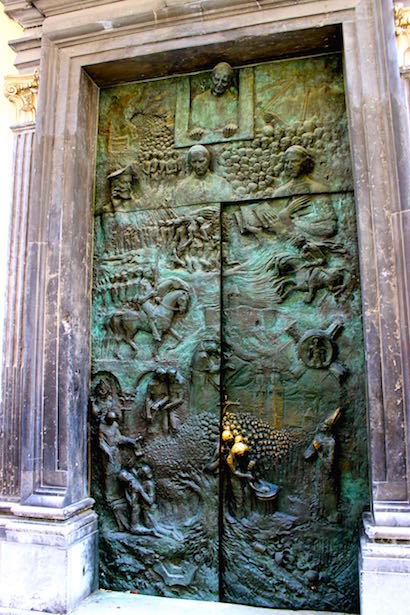 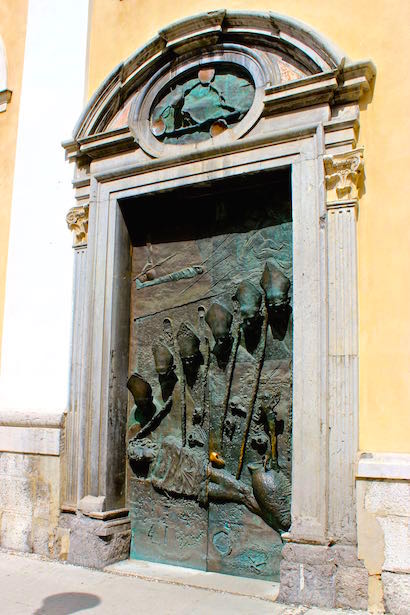 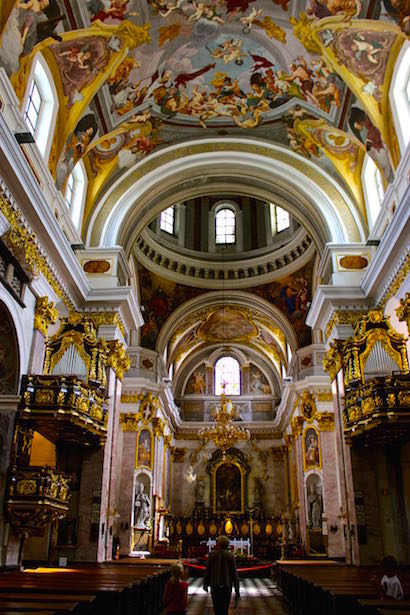 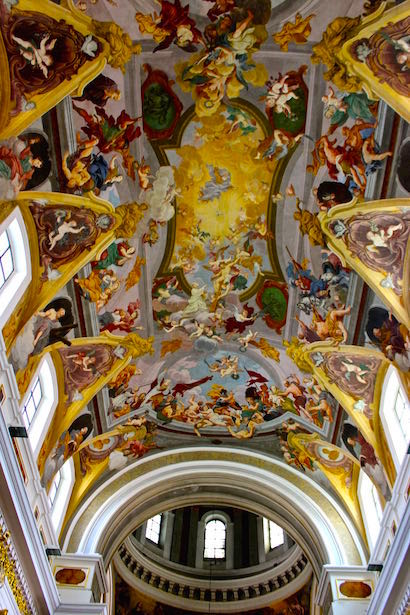 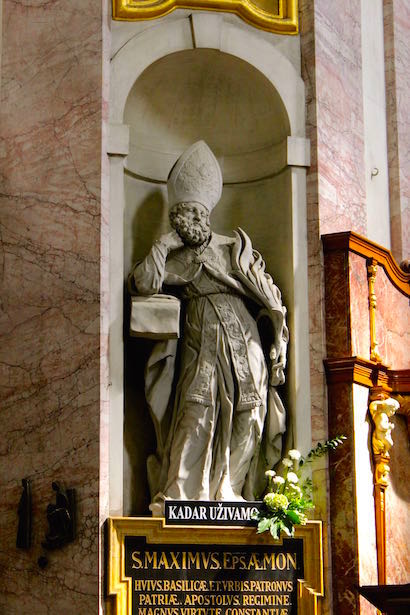 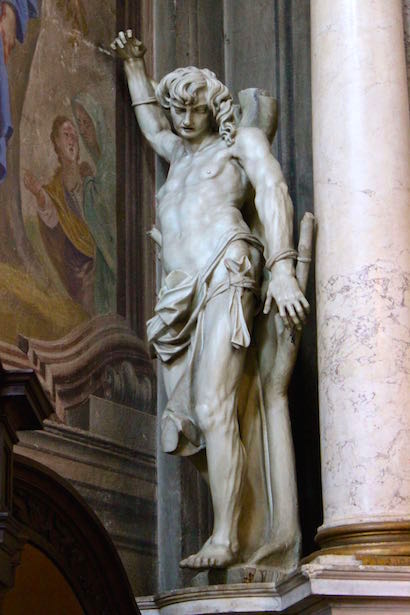 The Triple Bridge is a group of three bridges, connecting two parts of Ljubljana’s downtown over the Ljubljanica River. There was originally only one bridge, which linked Central Europe and the Balkans. In order to prevent the 1842 stone arch bridge from being a bottleneck, two additional pedestrian bridges were added in 1932 according to the Plečnik’s 1929 design. He decorated them with large stone balusters and lamps and two staircases, leading to terraces above the river, the banks with poplars, and the Ljubljana fish market. Two Plečnik’s urban axes of Ljubljana, the water axis and the Ljubljana Castle–Rožnik Axis, cross at the bridge.  In 2007, the mayor closed the downtown to traffic and now it is all a pedestrian zone. 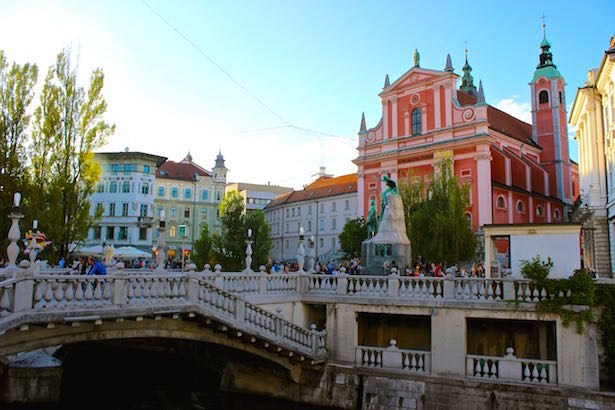 The central square in Ljubljana is Prešeren Square where the pink Franciscan Church of the Annunciation is located.  Most of the square was rebuilt after the 1895 earthquake with funds from the Austro-Hungarian Empire.  In the middle of the square is the statue of the Slovene national poet France Prešeren and the muse that inspired him. The Prešeren Statue was created by Ivan Zajec in 1905 and when it first debuted it caused quite a scandal with the scantily clad muse in the same square as the church. The local women would cover up the muse every night with a tarp.   The surrounding buildings are beautiful Viennese Art Nouveau style. 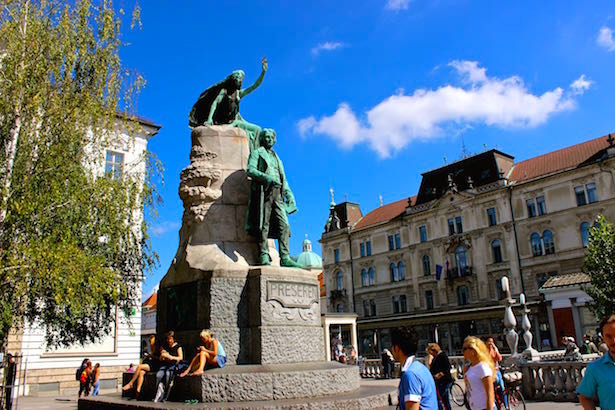 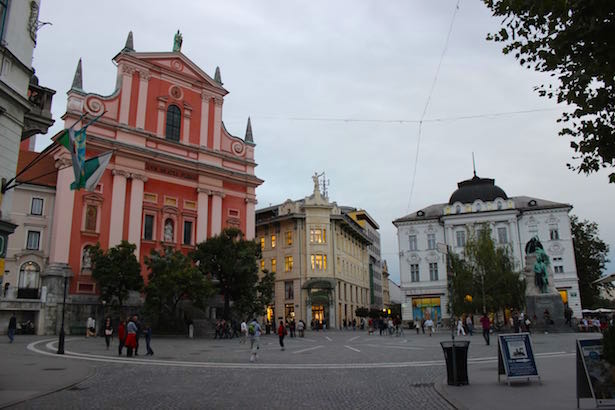 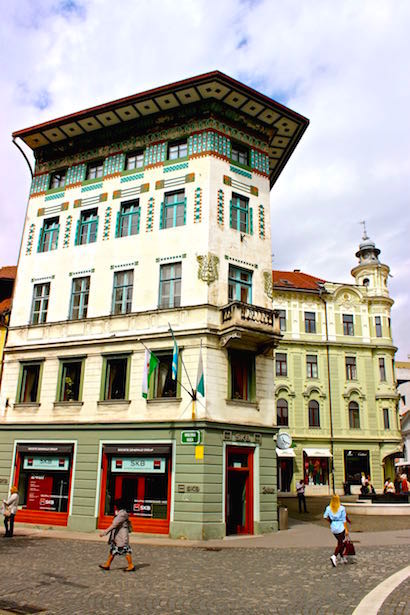 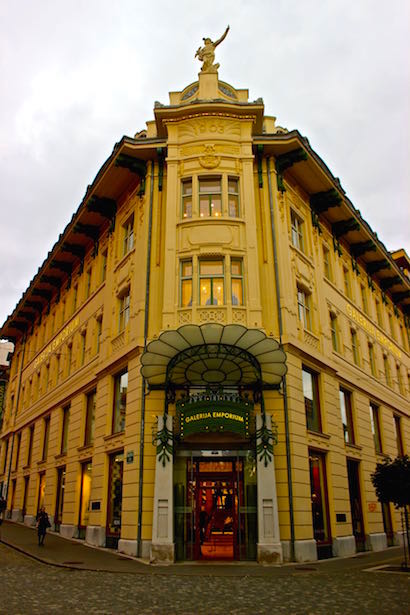 The Robba Fountain, one of Ljubljana’s best known Baroque monuments, also known as The Fountain of Three Carniolan Rivers, stands at the edge of the Mestni trg square. It was created between 1743 and 1751 by the Venetian-born sculptor and architect Francesco Robba.   Robba was inspired by Bernini’s Fontana dei Quattro Fiumi (Fountain of the Four Rivers) at Piazza Navona during a visit to Rome, but he modeled it after Fontana del Pantheon, the fountain by Filippo Barigioni at Piazza della Rotonda. In 2006, the original fountain was renovated and moved into the National Gallery, and the one at Town Square is a replica. 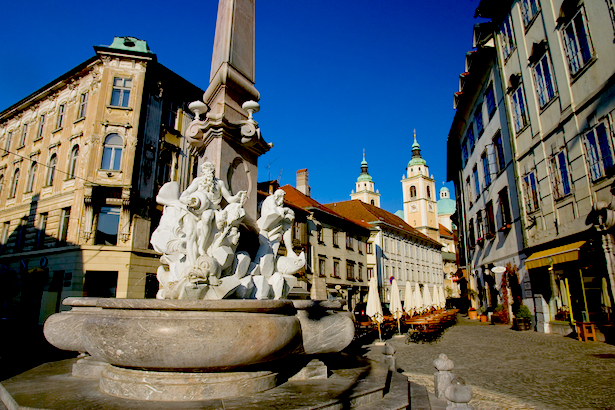 The Town Hall near the Robba Fountain, is the seat of the City Municipality of Ljubljana. The original building was built in a Gothic style in 1484.  Between 1717 and 1719, the building underwent a Baroque renovation with a Venetian inspiration.  I loved all the little shops in this area which have a village feel with small meat shops and a fabric shop. Local women were bustling in for the new shipment of Versace and Missoni fabrics to make new dresses. 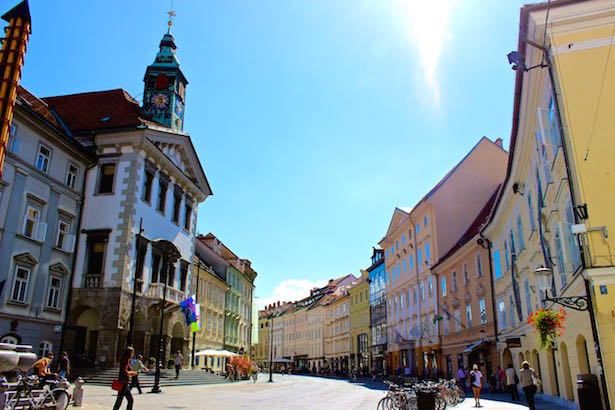 Congress Square is one of the most important centers of the city. It was built in 1821 for the Congress of Ljubljana and from then on became an important center for political ceremonies, demonstrations and protests, such as the ceremony at creation of Kingdom of Yugoslavia, ceremony of liberation of Belgrade, and protests against Yugoslav authority in 1988. The square also houses several important buildings, such as University of Ljubljana, Slovenian Philharmonic, Ursuline Church of the Holy Trinity, and Slovenska matica. 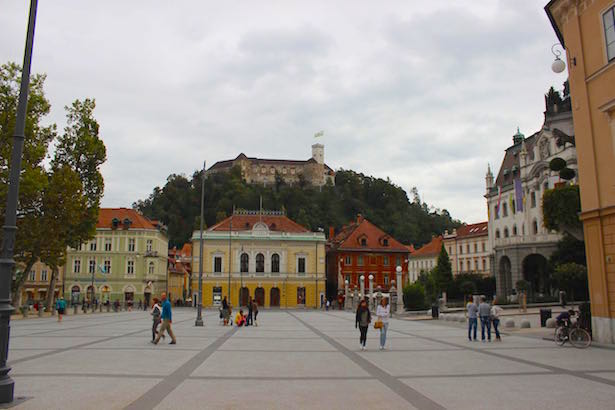 Another Plečnik creation, the Križanke was originally a Monastery of the Order of Teutonic Knights at Križanke dating to  1228. The earthquake of 1511 severely damaged the monastery buildings and they were partly rebuilt between 1567 and 1579.   Križanke continued to serve as a monastery until 1945, when the complex was nationalised, and the architect Jože Plečnik remodeled the now derelict monastery into a venue for Ljubljana Festival. Plečnik’s last major contribution to the city in 1956 & transformed the empty monastery into an open-air theatre and festival space. 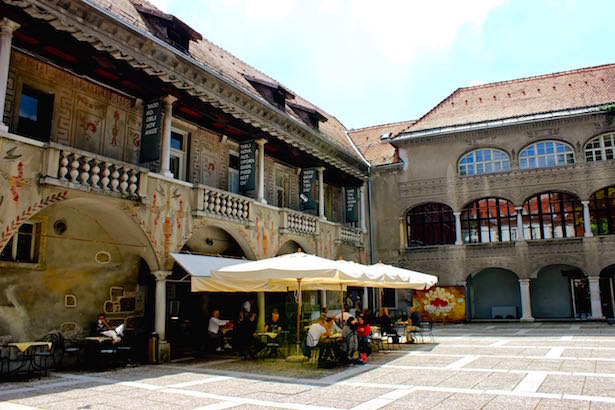 Ljubljana Castle sits high on top of the hill overlooking Ljubljana with some of the most beautiful views. The castle was built in the 12th century and was a residence of the Margraves, later the Dukes of Carniola.  A quick trip up the funicular and you enter the castle that houses several museum exhibitions and presentations, such as Slovenian History, The Prison and Virtual Castle.  The real treat though is sitting on the ramparts overlooking the city for sunset.  On the day I was there, there were several orchestras playing in three different squares in the city.  First was classical Austrian Mozart, then American style Big Band and finally a German polka.  The three bands seemed to take turns playing and I had the best seat in the house to enjoy it all with a sunset view. 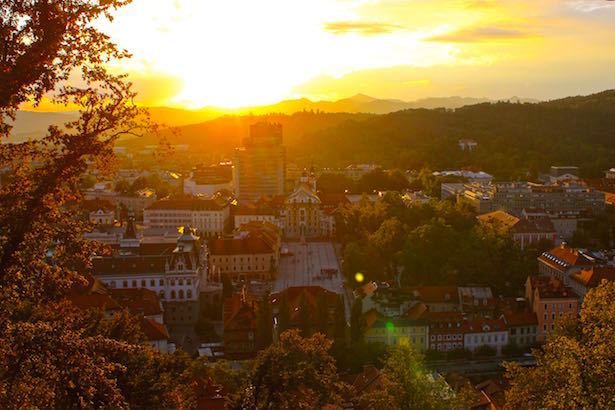 Is Ljubljana in Slovenia on your bucket list?
If you have been, tell us your tips and favorite adventures. 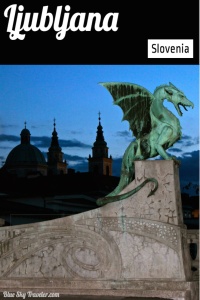 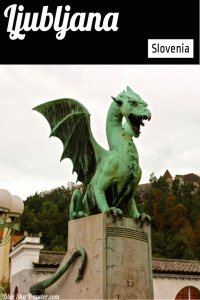