Many of our American Christmas traditions originated in Europe from the Christmas tree, Christmas Ornaments, Nativity Scenes, and Candy Canes.

So if you have enjoyed your list of American Christmas Movies, consider these European ones.

Enjoy these Christmas Movies at the most festive time of year!

This cult classic follows nine intertwined stories in the month before Christmas in London, England.

Love Actually has something for everyone in this romantic comedy as different versions of love are explored from marriage, platonic friendships, and a child’s first crush.

The movie was directed by Richard Curtis of who also directed Bridget Jones or 4 Weddings and a Funeral and stars some of England’s best actors. A feel good movie that captures the atmosphere of London during the festive season.

A Christmas Carol recounts the story of Ebenezer Scrooge, an elderly miser who is visited by the ghost of his former business partner Jacob Marley and the spirits of Christmas Past, Present and Yet to Come on Christmas Eve. After their visits, Scrooge is transformed into a kinder, gentler man.

Dickens story, published in 1843, popularized the terms “Merry Christmas”, Bah! Humbug, and Scrooge and has become one of the most popular Christmas stories with over 130+ adaptations for stage and film of this Christmas Classic.

I have seen a version of A Christmas Carol either on film or a stage version literally every year of my life and it’s just not Christmas unless you hear Tiny Tim say “God bless Us, Every One!”.

I picked three film versions to consider all of which are true to the Dickens novella with few scenes omitted or added staying true to the story:

A Christmas Carol (1951)
Though not the first film version of A Christmas Carol, this is the version that most Baby Boomers watched and Gen-X’ers grew up with and is considered the classic version. Alastair Sim defined Ebenezer Scrooge as the greedy & grumpy character as well as Michael Horden version of an over the top performance as the ghost of Jacob Marley.

A Christmas Carol 1984
This version ranks right up there with the 1951 version but in color. George C. Scott (Patton actor) again defines the role of a lonely and miserly Scrooge for another generation. The imagery will transport you to 19th century Victorian London.

A Christmas Carol 1999
This more modern version stars Patrick Stewart as Ebenezer Scrooge and incorporates more movie magic to bring the ghosts of the story to life.

Who doesn’t love the Muppets? Despite the fun and humor of the Muppets, this version of A Christmas Carol mirrors the original story, using direct quotes from the novel. Michael Caine plays Scrooge and it’s a heartwarming version for younger viewers and enjoyable for adults as well.

In The Holiday, two heart-broken women decide to escape during the holidays by exchanging homes to experience a different location for Christmas.

This romantic comedy highlights England’s small towns with a White Christmas, cozy pubs, and winter locations. If only it snowed in England every year on Christmas.

Christmas Movie Locations: All interiors were filmed on a studio set, but the California town and England town do exist.

England: Filmed in Shere, an idyllic English village with a population of under 4,000 in the Guildford district of Surrey, south-west of London. It claims to be the most photographed town in Surry. Rosehill Cottage unfortunately is not real. Several scenes were also shot at Cornwell Manor in Oxfordshire.

California:  The house in the film was built in 1928 and located at 1883 Orlando Road in San Marino. It is a stunning, distinctive Mediterranean-influenced California mansion, filled with all the luxurious, modern conveniences.  Filming also took place at several locations in Los Angeles.

In this holiday romantic comedy, Game of Thrones’ Emilia Clarke works as a costumed elf in a year-round Christmas shop and has lost her way in life. She meets Tom (Henry Golding), a handsome charmer who seems too good to be true. As the city transforms into the most wonderful time of the year, Tom and Kate’s growing attraction turns into the best gift of all — a Yuletide romance.

Wham’s song “Last Christmas” features heavily in the movie so get ready for the plot twist at the end. The third star of Last Christmas is London during the holidays highlighting the grand buildings with Christmas lights and garland.

Capturing the essence of primary school (ages 4-11) Nativity performances, this film follows a disgruntled teacher and his enthusiastic, hilarious class as they try to put on the biggest and the best nativity Coventry has ever seen.

Nativity! is typical English humor and has now become a cult favorite with four installments.

In 1955, Welsh poet Dylan Thomas wrote A Child’s Christmas in Wales. It was a remembrance of the Christmas season, as perceived by a happy child capturing all aspects of the season: the weather, the village activities, the villagers, the sights and sounds, the purchasing and opening of gifts, and the preparation and enjoyment of food and drink for the holiday.

Based on this prose, the movie A Child’s Christmas in Wales (1987), features an older man (Denholm Elliott) on Christmas Eve who reminisces with his adoring grandson about his own memories of the holiday as a boy in Wales.

Joyeux Noel is based on the real events of the 1914 Christmas Truce (also known as Weihnachtsfrieden or Trêve de Noël) during World War I.

A true Christmas story of peace and love, the movie follows the perspectives of French, Scottish and German soldiers in the trenches of Europe with dialogue in all three languages.

It’s one of the most amazing war stories ever told and demonstrates the awe-inspiring power of Christmas.

When French matriarch Junon (Catherine Deneuve) gathers her family together for Christmas, she knows it might be for the last time. Junon has just been diagnosed with leukemia, and her only chance of survival lies in a risky bone-marrow transplant.

If you are over the  saccarin Hallmark/Lifetime Christmas movies, A Christmas Tale is a raw movie showing how family gatherings at the holidays often are with the added layer of dealing with illness.

Set in the southern region of France, My Favorite Season is a French drama showing a long-simmering conflict that boils over when a family comes together for Christmas.

The story reveals a middle-aged sister (Catherine Deneuve) and her angry, wayward brother (Daniel Auteuil) who resume their fragile relationship when they are forced to care for their ailing mother.

“Alles ist Liebe” (Love Is All)

“Alles ist Liebe” (Love Is All) is Germany’s response to England Love Actually.

This popular 2014 German Christmas romantic comedy sets out to resolve the love troubles of several endearing characters before Christmas is over. It’s in German so look for the subtitled version.

In “Das ewige Lied” / The Eternal Song, country priest Joseph Mohr, arrives to his new parish in Austria to a divided congregation. The village is cut in half by a river that forms a political and more importantly, a social border. Both sides are engaged in a bitter struggle, with the wealthy merchants on the one side trying to break the monopoly of the poor bargemen on the other.

Braced by his strong sense of justice, Mohr fights for the rights of the impoverished bargemen. To give them a little comfort and warmth in their darkest moments, he and his friend Franz Xaver Gruber, the schoolteacher in the village, create a song that has become synonymous with Christmas all over the world: “Silent Night, Holy Night”.

The movie is based on the true story of a Silent Night.  Joseph Mohr wrote the lyrics to the song in Mariapfarr in Lungau as early as 1816. In 1818 he moved to Obendorf. On the afternoon of Christmas Eve the organ was broken, so Gruber composed the melody that today is known around the world. That same evening, after Christmas Mass in St. Nicholas Church, with Joseph Mohr on the guitar the two friends sang, “Silent Night, Holy Night”, probably the world’s most well-known Christmas song, together for the first time.

Movie Location: The story is set in Obendorf, Austria (a flat area of Austria), though the film shows many scenes with the Alps. It’s still Austria though.

Although an American film, The Shop around the Corner (1940) is set in Budapest, and based on the 1937 Hungarian play Parfumerie by Miklós László.

It tells the love story between two disgruntled employees at a leather goods shop in Hungary during the lead up to Christmas.

A true Christmas classic, this is a must-see starring James Stewart.

While traveling through Austrian and Czech European Christmas markets, you might run into a character called Krampus.

In Eastern European folklore, the Krampus is a creature, half-goat and devil with a long pointed tongue and fangs. Krampus travels with St. Nicholas to see all the children.

If you are good, you receive a Christmas gift from St. Nicholas. If you are bad, you get a visit from Krampus who gives you coal and Ruten bundles that are used for swatting children.

Krampus, the movie, shows this Central European character and takes the naughty list to another level!

Where in Europe would you spend Christmas? 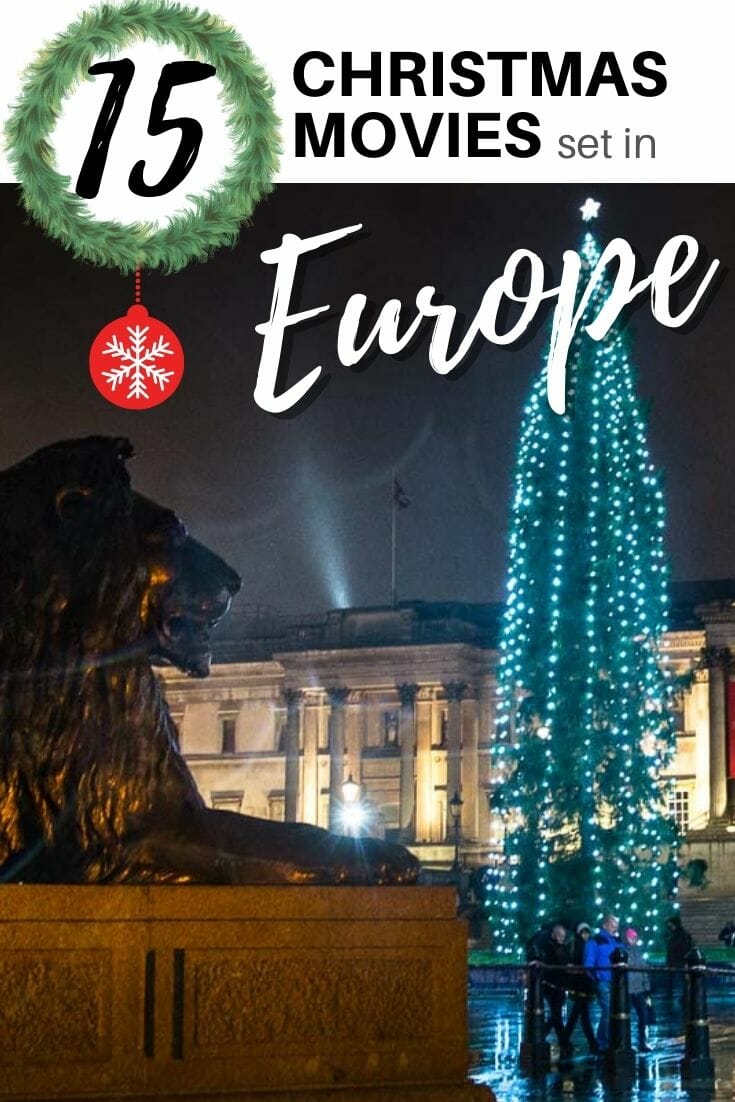 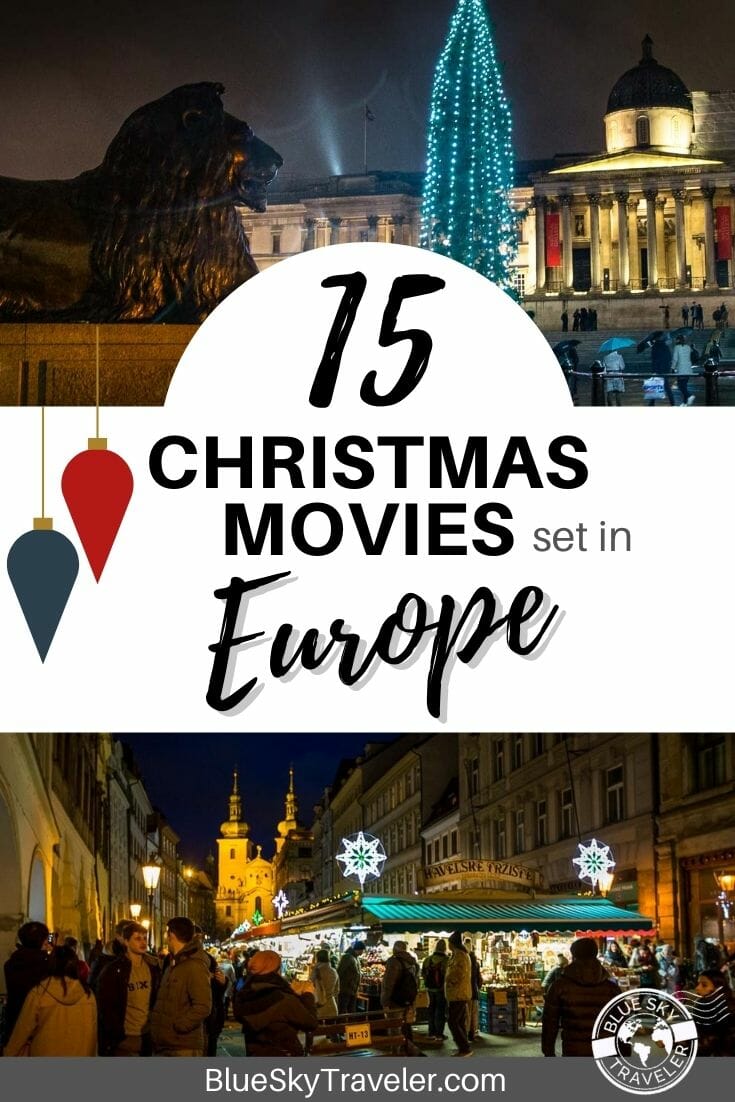 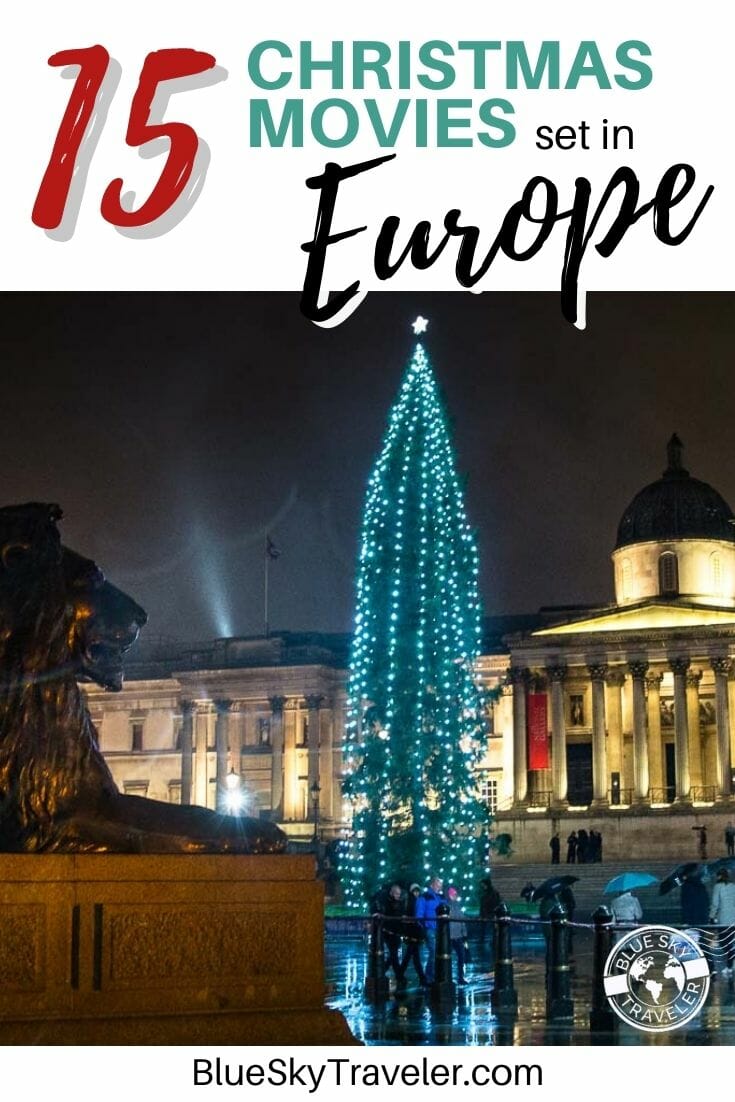 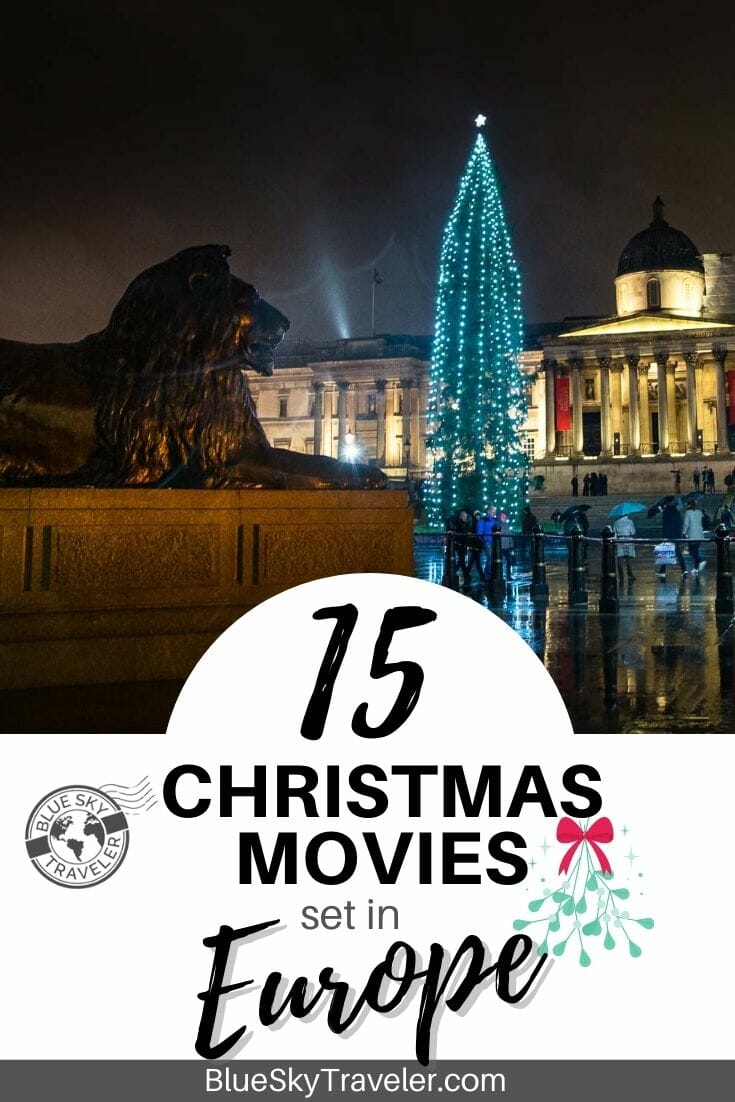 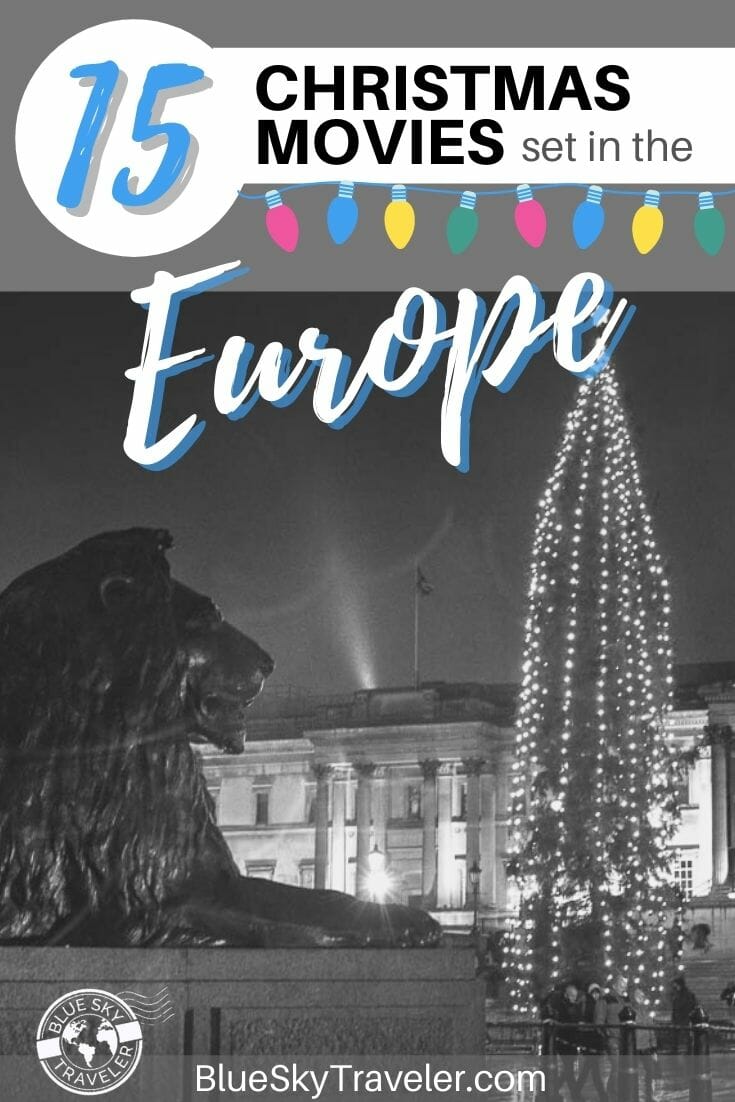 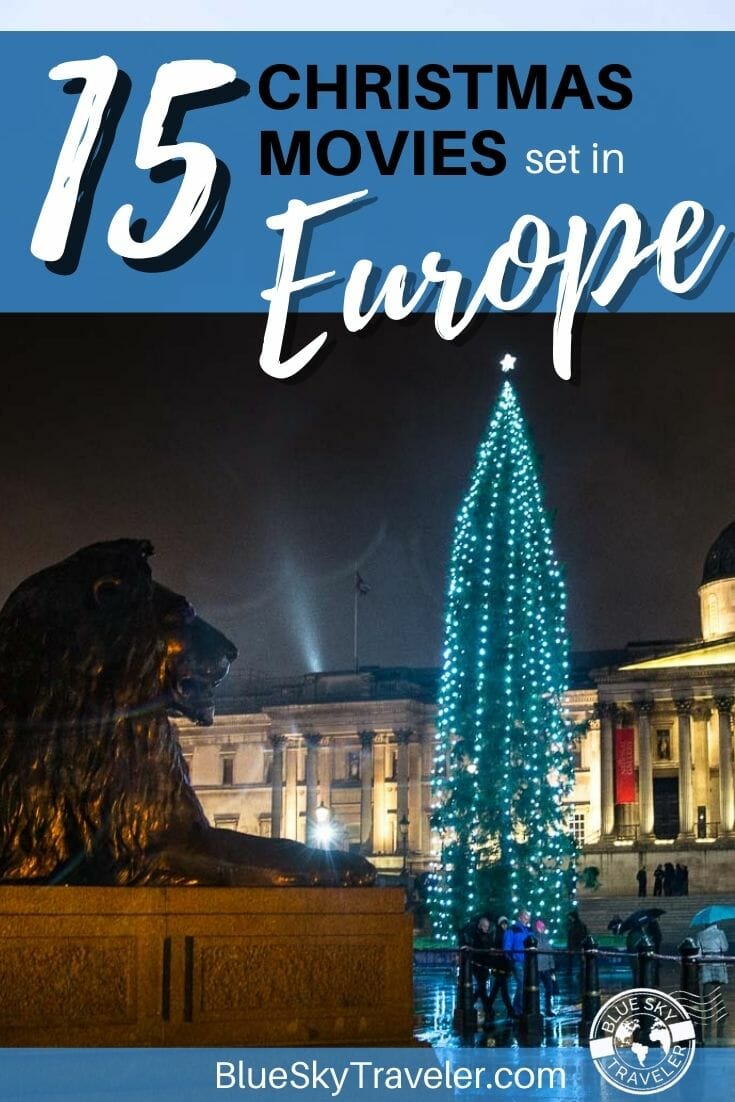 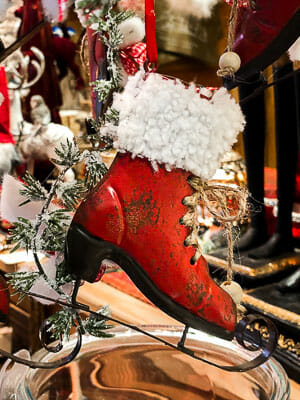 Enchanting Ornaments & Gifts to Discover at the European Christmas Markets 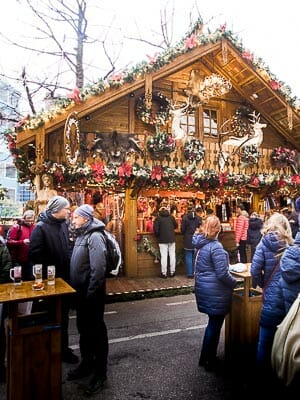 How to say Merry Christmas in Europe 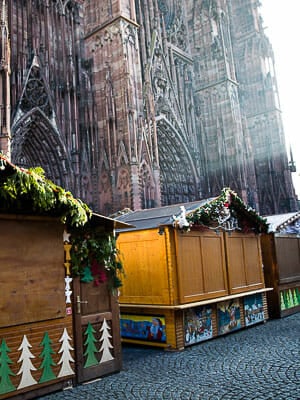 Tips for Your Visit to the European Christmas Markets 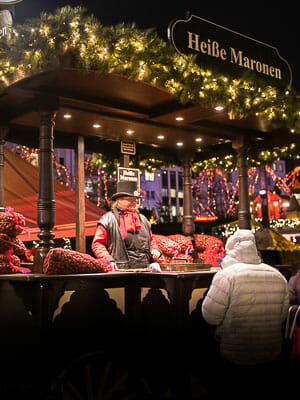 15 Foods & Drinks you must try at the European Christmas Markets 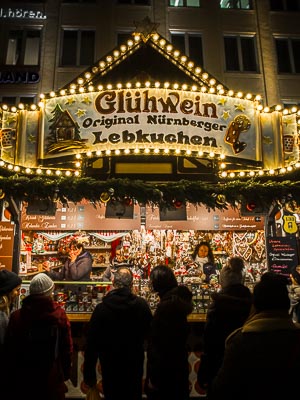