Medjugorje, visited by over 1 million people a year & 30 million people since 1981.  This small town in Bosnia & Herzegovina is the third most visited pilgrimage site in Europe.  Marian apparitions to 6 children in 1981 has left this town with a message or faith and a booming religious tourism industry. 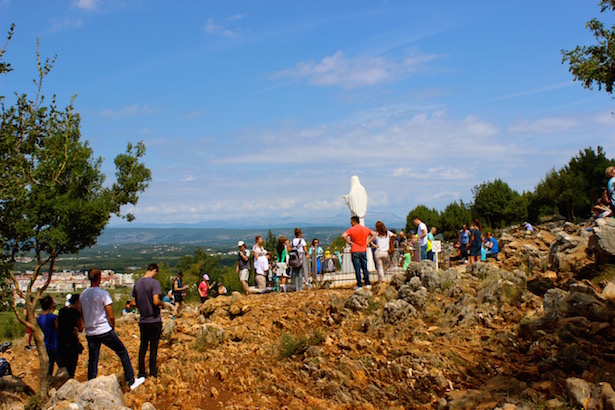 In the Catholic faith, Marian apparitions are a supernatural appearances of the Virgin Mary to people on earth.  The stories I heard growing up in the Catholic faith had similar themes. Young children or a person who was considered poor would see the Virgin Mary in often remote places and would be given messages.  There were four apparition stories I remember in particular.  Our Lady of Guadalupe from Mexico, Our Lady of Fatima in Portugal, Our Lady of Lourdes in France, and then Our Lady of Medjugorje in Bosnia & Herzegovina.  The year I was confirmed, my confirmation teacher had visited Lourdes on a pilgrimage and had taken our rosaries to be blessed, so the Marian apparitions had a personal connection for me.

So when I was traveling through Bosnia & Herzegovina, I made sure to make a stop in the small town of Medjugorje, not only to reflect on my own Catholic heritage but also as I was amazed at the variety of religious sites all existing within one hour of the predominantly Muslim town of Mostar.   Just one-half an hour away was a Sufi Dervish Monastery and 30 minutes the other way was Medjugorje.  I quickly figured out how to spell the name of the town as I found references to medjugore, medugorje, međugorje, medjugorie – but Medjugorje it was and I was off on a bus to discover this corner of Bosnia & Herzegovina.

In 1981, six children saw visions of the Virgin Mary on a hill (now called Apparition Hill) above the town of Medjugorje. The children told their visions to their priest and the news spread bringing millions of people to the site that has become the 3rd most visited pilgrimage site in Europe.

In the visions, the Virgin Mary gives the six seers different messages for a total of ten secrets that will bring worldwide conversion to the world.

These are some of the messages: 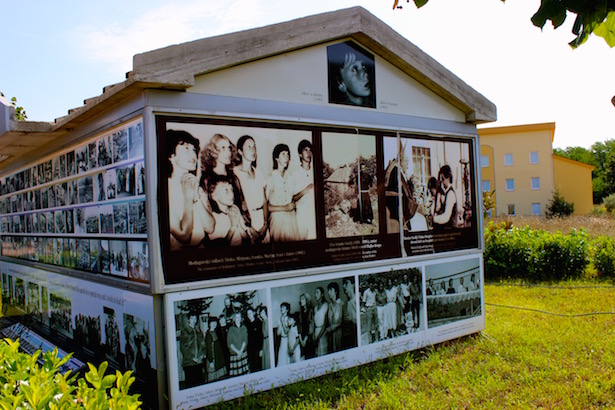 Medjugorje is not without controversy. The backstory has all the makings of a movie. In 1981, Bosnia was under the Tito regime in Yugoslavia and one of the priests of the parish, Father Jozo Zovko, was imprisoned by former Yugoslavian forces for being involved in a nationalistic plot.  In another angle, one of  the priests who guided the six children, Father Tomislav Vlasic, was involved in claimed sex scandal and the Vatican official who was skeptical of the apparitions being the future Pope Benedict.  Read more here ->>.

A Vatican religious task force just finished their findings in 2015 but has not released the results.  Stay tuned on this one but in general the Catholic Church does not affirm apparitions until the visions have stopped so that no new evidence may contradict the findings.

Faith or Financial profit?  The seers have become wealthy and millions of dollars in tourism has been brought to the region. Just google it and you will see this is a hot topic that has divided the Catholic church. 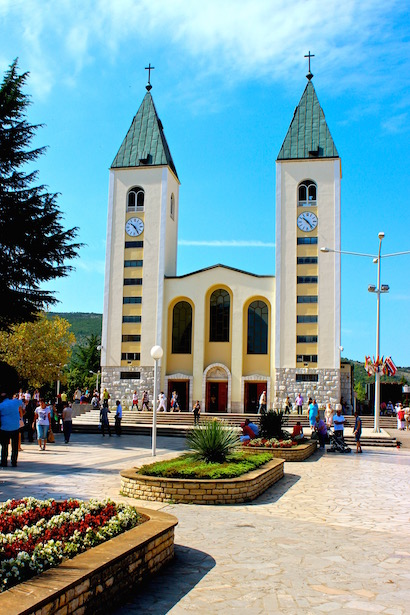 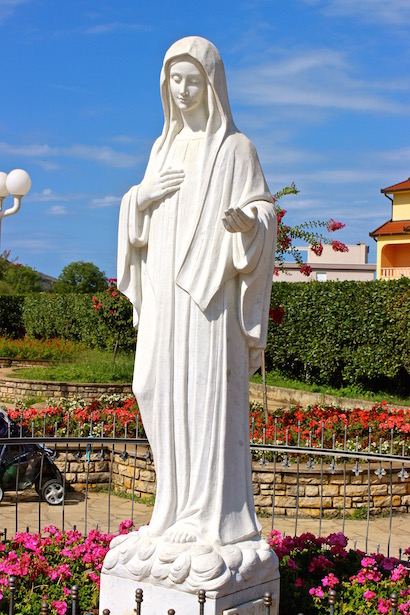 Entering into the town from the bus station, you will walk through the main street of the town which is a gauntlet of Catholic souvenir shops.  At the end is St. James’ Church (Crkva Sv. Jakova), that has been built post the 1981 apparitions to service the large crowds descending upon Medjugorje. There is also a large outdoor church/auditorium for additional mass services. 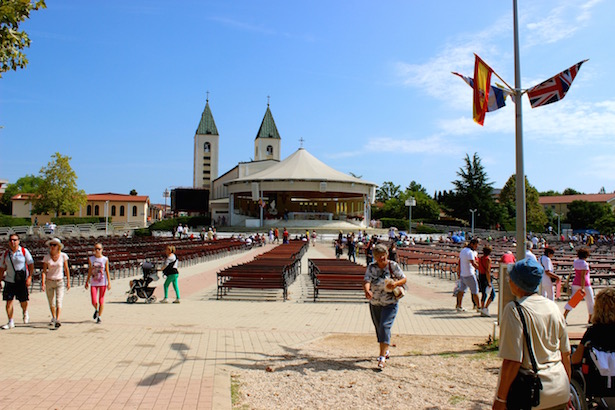 Stations of the Cross

Directly behind the church is a pathway leading back to the graveyard and a house with all the pictures of the seers. Along the way are patios with the mosaic representations of the Stations of the Cross. 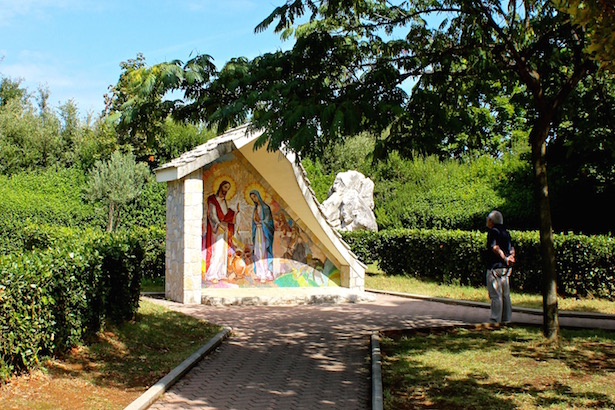 Also on the path is a statue called Uskrsli Spasitelj (Resurrected Savior) that is also known as the “Weeping Knee”.  Pilgrims wait in line to touch the well-worn knee of that statue.  It was overwhelming to see the pilgrims weeping themselves at the cross in both belief and desperation. 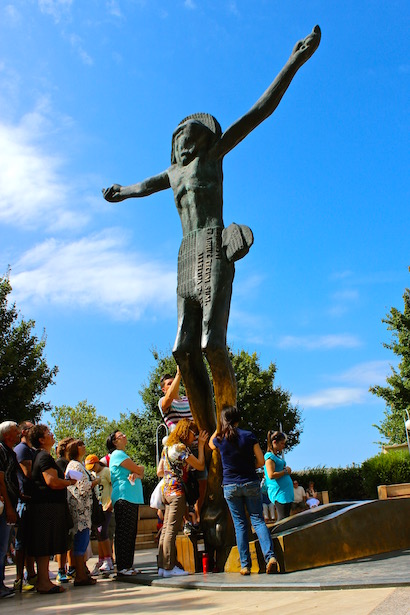 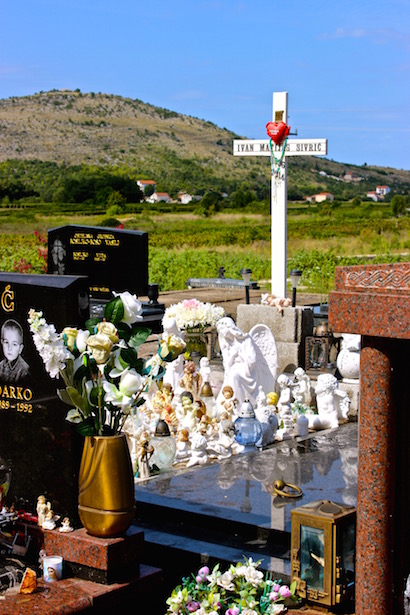 Apparition Hill is ~1 mile from the church and town.  A well-worn path leads to the base of the hill that now has another gauntlet of souvenir shops and cafes selling water to the very thirsty crowds in the hot Bosnian sun.

The path up is rocky boulders.  Why don’t they smooth this out? The common answer was a pilgrimage should be a challenge and many climb it barefoot as an act of penitence.  I was shocked to see so many elderly and those with infirmaties climbing with canes. One woman was being carried on a stretcher up to the top.

At the top sits a statue of the Virgin Mary in the spot that they 6 children first saw her.  Pilgrims gather around in silent prayer. 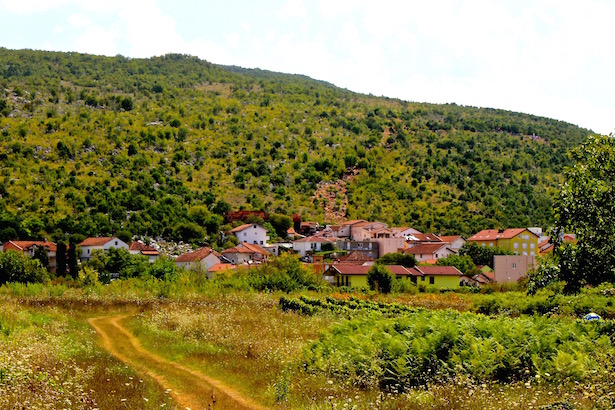 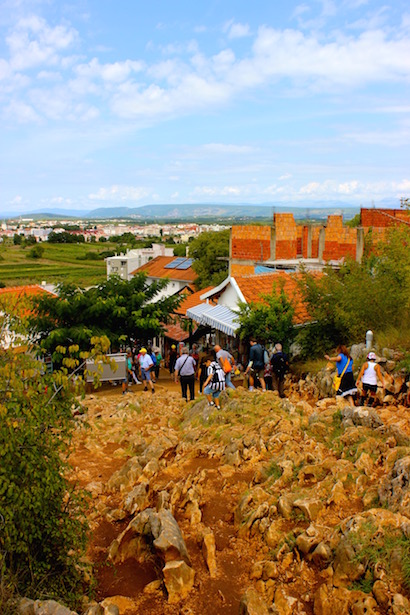 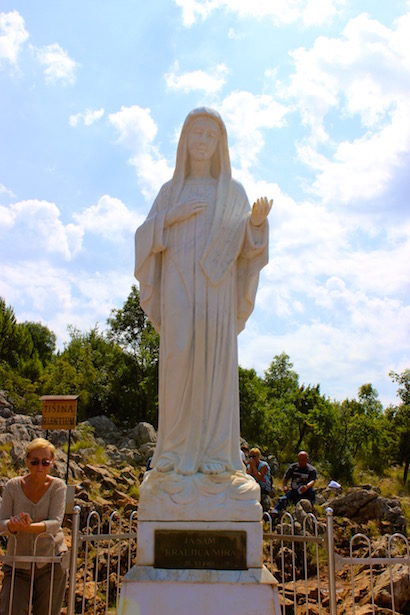 Both in town and at Apparition Hill, there is a shocking amount of souvenir shops where you can buy Catholic Tchotchkes.  I have never seen so many rosaries in one place – it looked like New Orleans Mardi Gras. I have also never seen more knock-off sunglasses in one place. 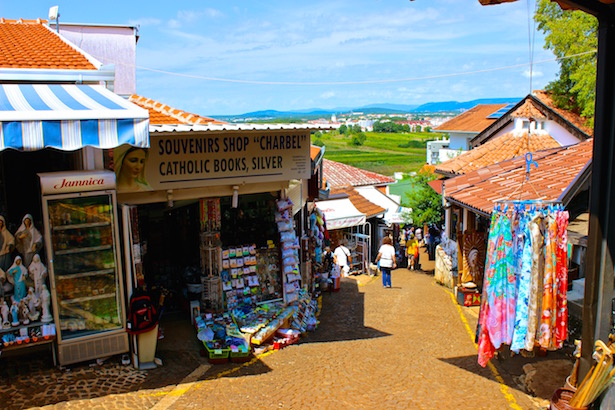 Faith or Financial Profit?  Time will tell. What I can attest to is that millions do believe and come here in prayer and looking for answers.

Bosnia is a interesting melting pot of religions and an experience to see so many in one small area: Croat Catholics in Medjugorje • Muslim Bosniaks in Mostar & Sarajevo • Sufi Dervish Monastery in Blagaj • Eastern Orthodox Serbs in Sarajevo. 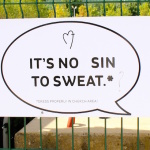 Clothing: This is a Catholic Church and on all the grounds they will request that you be covered up.  You do not need a head scarf (Though a hat is recommended when outdoors for sun protection)  [/vision_list_item] [vision_list_item icon=”fa-compass” color=”#51A6E0″] Weather: It’s hot here especially in the summer. Be sure to bring water especially for the hike up Apparition Hill. [/vision_list_item] [/vision_vector_list][/vision_content_box]

Is Medjugorje in Bosnia & Herzegovina on you bucket list?
If you have been, tell us your tips and favorite adventures. 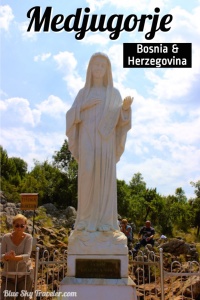 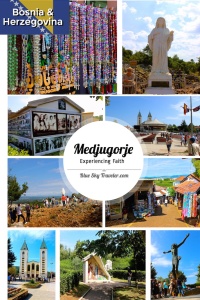