Michelangelo never wanted you to see his drawings and preparation sketches, but the Ashmolean collection will give you a glimpse of methods of the Old World Masters – Michelangelo and Raphael. 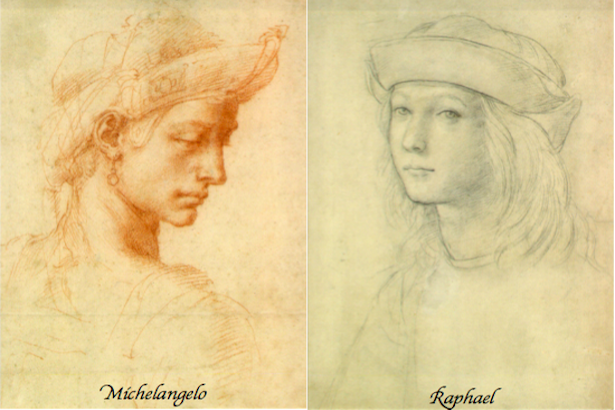 If you have ever viewed any documentaries on Michelangelo, he was driven, tempermental, obsessive and liked to work alone.  He actually bordered on the narcissism so often seen in greatness and so often the price paid for creative genius. One story details that he painted most of the Sistine Chapel himself & dismissed his assistants on the second half of the process, not trusting them to not disclose his techniques nor even to mix the paint. In preparation for his sculptures and frescoes, Michelangelo generated thousands of sketches over his 77 years as an artist. Some were general ideas and practice for his legendary artworks and other were part of communication with sponsors detailing the vision for his sculptures and paintings. However, Michelangelo almost always wanted to have his drawings destroyed. When working in Rome, he would send letters back to his studio in Florence ordering drawings to be burned. This is why only about 600 have survived. In the 1568 edition of Lives of the Artists by Giorgio Vasari (only 4 years after Michelangelo’s death adding to the credibility of the documentation), Vasari explains that Michelangelo burned a “large number of drawings sketches and cartoons made by his own hand so that no one would see the labor he went through and the ways in which his genius made its attempt, in order not to appear anything but perfect.” Michelangelo died in Rome in 1564, at the age of 88 (three weeks before his 89th birthday). His body was taken from Rome for internment at the Basilica of Santa Croce, fulfilling the maestro’s last request to be buried in his beloved Florence. His estate went to his nephew, Leonardo, including his studios and unfinished works including about 600 drawings. The drawings stayed mostly in the family for a few hundred years until the late 1700’s / early 1800’s when English aristocrats began taking “Grand Tours” and collecting antiquities and old world masters Renaissance painting and drawings. One of those collectors was an English portrait artist named Sir Thomas Lawrence. It is not fully clear when Lawrence began collecting drawings seriously. By his own testimony, he always had great enthusiasm for Old Master drawings and, in his youth, copied prints after them with avidity. Lawrence had enough success by the early 1790’s to start collecting but most likely obtained many of the Michelangelo drawings shortly before 1820. In his lifetime, Sir Thomas Lawrence acquired the greatest collection of Old Master Drawings ever formed in Britain. Upon Lawrence’s death in 1830, the works were offered to the nation of Britain and the monarch, but at that time the government lacked the funds to purchase the collection.  The collections were acquired mostly by The British Museum and the Ashmolean Museum.  You see other Michelangelo drawings in the news like the drawing sold in 1993 to the Getty Museum for $6 million USD.
The Ashmolean possesses the third largest collection in the world of drawings by Michelangelo – after the Casa Buonarroti (Over 200 drawings) and the British Museum (90 drawings) –and a rich group of drawings by Michelangelo’s pupils and close associates, as well as a number of contemporary copies after drawings by the master that have subsequently been lost.

I was also shown a selection of Raphael paintings.  Raphael was known as even more prolific draftsman often creating up to 6 different views of a portrait idea before selecting one.
Raphael was also one of the first artists to use female models in his studio. Other contemporaries used male models for both female and male forms. You can see this in Michelangelo sketches where the females look like modern day female body-builders.  The Raphael’s are equally interesting and I enjoyed putting them side by side to see the contrasts in these rivals who both produced eternal artwork that captures our attention to this day.
So here is your chance to see an Old World Master drawing up close and personal. Upon making your appointment with the Ashmolean Print Museum, you will have access to the Print Room. I was required to lock up my bag and coat in a free locker and then shown into the Print Room. Several Michelangelo & Raphael drawings were presented for my viewing which I was able to photograph (No flash allowed) and are pictured throughout this article. You will be given ample time to study the sketches, to view his sketching technique and appreciate the art in complete silence. It’s a priceless opportunity to view million dollar art not normally shown to the public anymore. Tips & Information