Mostar, a city at the crossroads of culture & religion of Muslim Bosniaks, Catholic Croats, and Serbian Orthodox has survived the power struggles and today is a magical village to explore in Bosnia & Herzegovina. 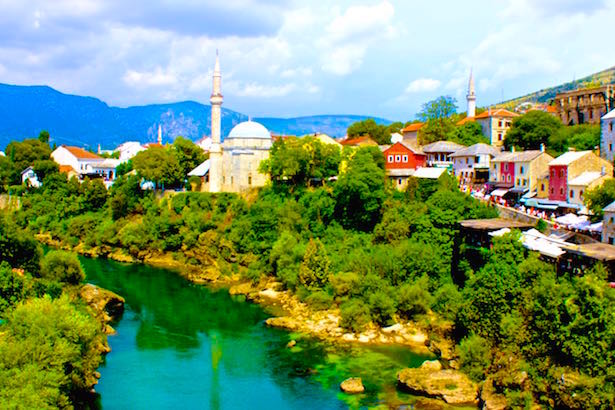 Mostar’s history dates back to prehistory human settlements on the river banks of the Neretva and there is also evidence of Roman occupation.  Most documentation on the city begins in 1468 when Mostar came under Ottoman rule when the town was organized into two distinct areas: čaršija, the crafts and commercial centre of the settlement, and mahala or a residential area developing the city as we see it today.

In 1878, Mostar was absorbed into the Austro-Hungarian Empire absorbed Mostar in 1878 until the end of World War I in 1918. From then it was controlled in the nation of Herzegovina by Croatia and then Tito’s Yugoslavia after World War II.

In 1992, Bosnia and Herzegovina declared independence from Yugoslavia.  Mostar at the center of all of these religions and cultures colliding suffered through several sieges.  Until the war ended in 1995, many buildings were destroyed by both sides including a Franciscan monastery, the Catholic cathedral, bishop’s palace (with a library of 50,000 books), over a dozen mosques, and the famous Old Bridge.

The history of the war is fairly intricate, so I would recommend checking out historical sources. I remember the images of this war on TV and some of my family members in the military were stationed in Bosnia. So today, to see this country and city on the rebound is a wonder.  Ask any traveler and they will say there is something intangibly special about Mostar – magical. 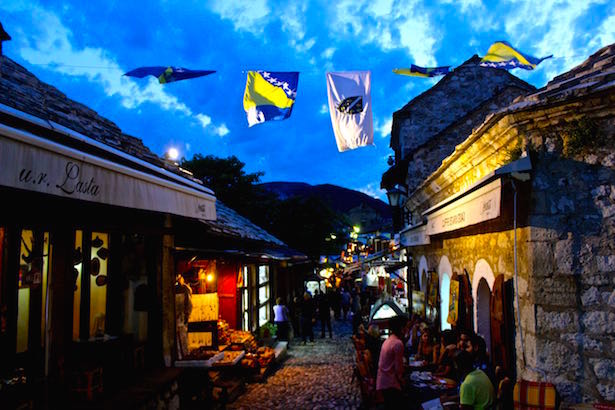 Top Sites to See in Mostar

The star of the town and one of the Bosnia & Herzegovina’s most recognizable landmarks, Stari Most (Old Bridge) is considered one of the most exemplary pieces of Islamic architecture in the Balkans.

The famous traveler Evliya Çelebi wrote in the 17th century:

The bridge is like a rainbow arch soaring up to the skies, extending from one cliff to the other.
…I have passed through 16 countries, but I have never seen such a high bridge.
It is thrown from rock to rock as high as the sky. 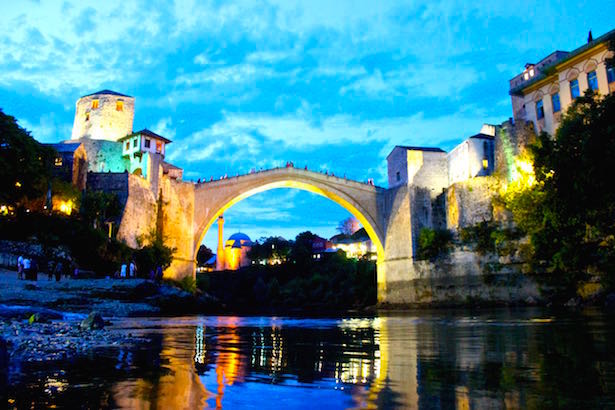 Commissioned by Suleiman the Magnificent, construction began in 1557 to replace an older wooden suspension bridge of dubious stability.  The bridge was completed nine years later according to the inscription on the bridge detailed 974 AH, corresponding to the period between 19 July 1566 and 7 July 1567.  The bridge was  the widest man-made arch in the world at the time at 98 ft 5in long and 13ft 1in wide and 78ft 9in high.

The design was by Mimar Hayruddin. Hayruddin was a student of Mimar Sinan, the Ottoman architect who built the Süleymaniye Mosque in Istanbul and was a contemporary of Leonardo DaVinci (They competed for some of the same design projects). Charged under pain of death to construct a bridge of such unprecedented dimensions, the architect reportedly prepared for his own funeral on the day the scaffolding was finally removed from the completed structure.  He lived!

Two fortified towers protect it: the Halebija tower on the northeast and the Tara tower on the southwest, called Mostari “the bridge keepers” and how the town of Mostar gets its name.

During the 1993 Croat-Bosniak War, the bridge was destroyed by Croat forces claiming strategic importance though academics argue that the bridge did not hold strategic importance but rather this was a deliberate culture property destruction in order to destroy the connection of a shared cultural heritage and peaceful co-existence by the two communities.

A make shift bridge was quickly put in place until it was reconstructed between 2001 and 2004. Many world organization and countries donated resources to help in the reconstruction using Ottoman construction techniques and the original tenelija stone both from local quarries and recovered stones from the original bridge in the river.

The Old Bridge is a UNESCO World Heritage Site. 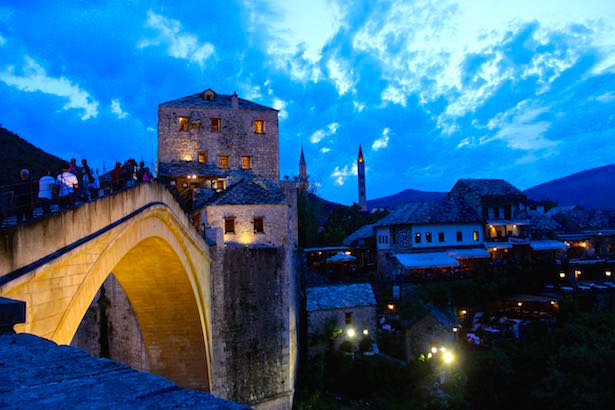 
Hang out at the bridge and you will see Bosnian men in speedos on the edge of the highest point of the bridge. When they collect a certain amount of donations from the crowd, they will dive off the Stari Most bridge into the Neretva River. The  Neretva is very cold and 78 feet down, so this is a very risky feat and only the most skilled and best trained divers will attempt it. The practice dates back to the time the bridge was built, but the first recorded instance of someone diving off the bridge is from 1664.

Take a stroll in the Old Bazar Kujundziluk, the oldest part of Mostar, and a cobble-stoned street resembling a Turkish Bazaar.  Several wooden artisan stalls line the street with carpets, jewelry, traditional garments, scarves and pipes.

The day I was there, a huge thunderstorm rolled into town. With one boom of thunder, all the shop owners hopped up and collected moved their goods out of the exposed area of the shop in a routinely manner. Not two minutes later it poured. It did give me a view of the old buildings sans people. Later that day, the bazaar was back in full swing and the sky was also an amazing blue from the storm that is in most of my pictures. The colors are amazing on the Turkish mosaic lamps. 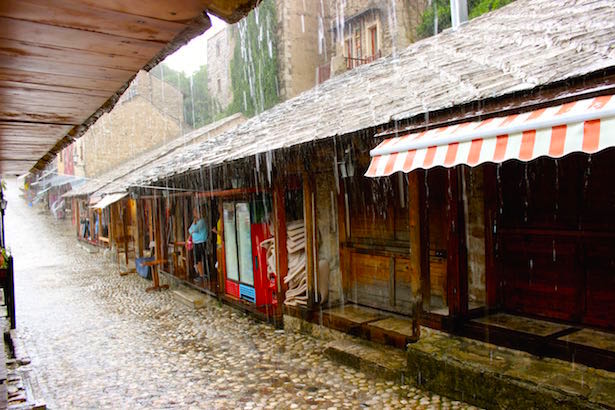 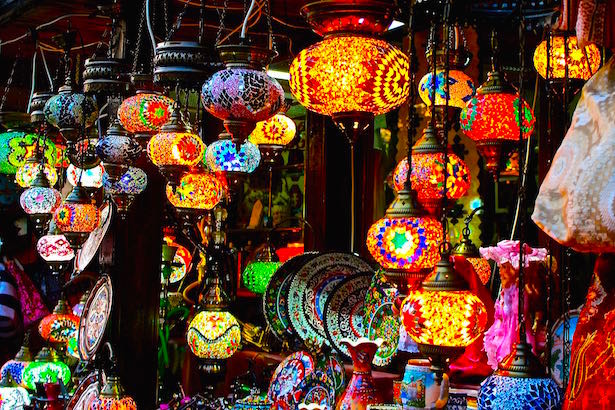 The Kriva Cuprija (or the Crooked Bridge) was an earlier version of the big Old Bridge in a perfect semicircle. It crosses the Rabobolja creek on the right-bank of the Neretva River.  The floods of December 2000 destroyed this bridge and it was reconstruct by a UNESCO project, financed by the Grand Duchy of Luxembourg in 2001.  I find it very interesting to see so many foreign investments in this country. 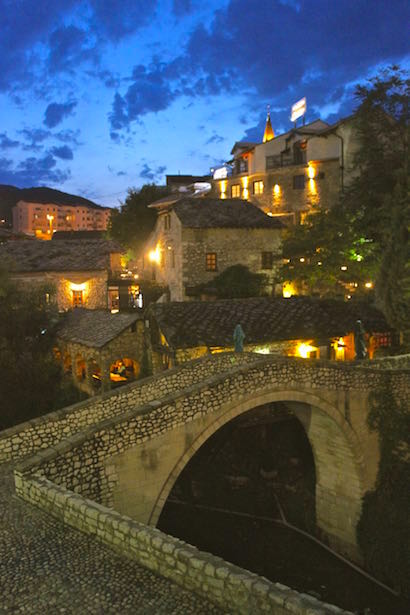 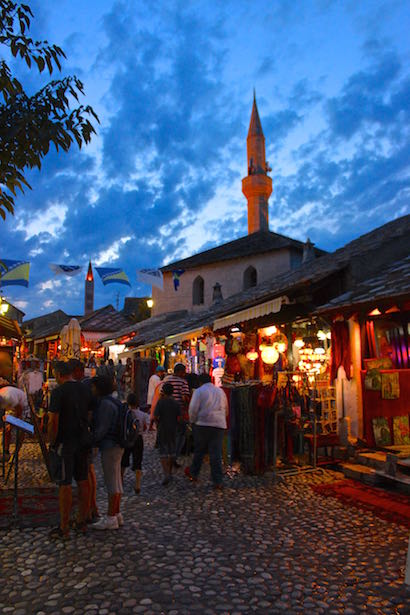 War Gallery & Signs of the War

Next to the Old Bridge is the War Photo Exhibition displaying many images of the war. Throughout the town, especially going to the bus & train stations and Bulevar street (which was basically a sniper alley), you will see the signs of this war even today. Walking the streets in this state, you can imagine the hell of those years with a divided community. 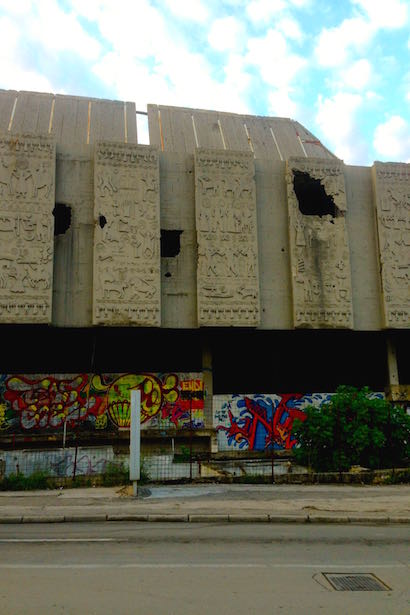 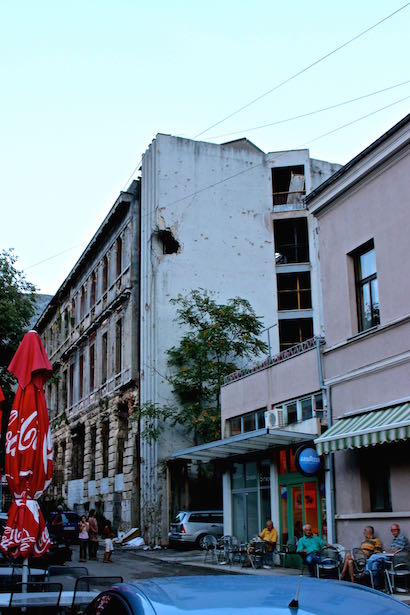 The mosques have been rebuilt in Mostar and today there are 10 mosques with seven minarets visible.   The slender minaret are the Christian equivalent of a belltower. Historically the prayer leader (muezzin) would climb the minaret 5 times a day to call the Muslims to prayer. Today they are replaced by loudspeakers, but you can climb the minaret for a view of Mostar. 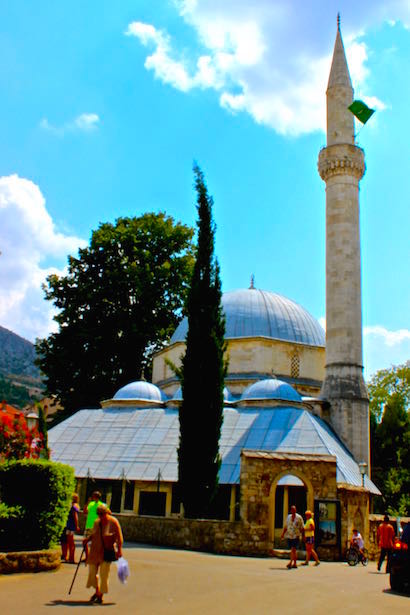 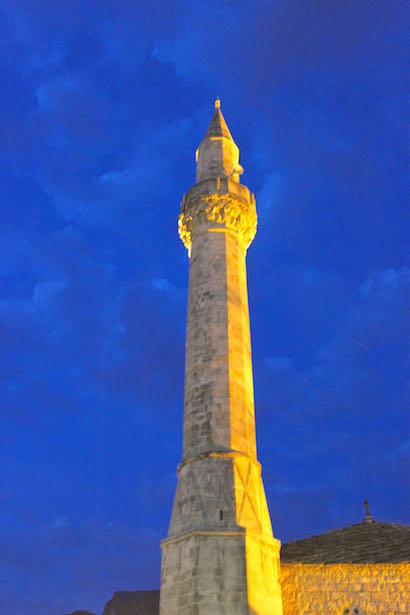 Along the banks of the River, there are many stone cafe-style restaurants built into the banks with gorgeous views of the bridge. Take the opportunity to try some of the wonderful Bosnian food made for meat lovers. The Cevapi was a favorite as well as the Turkish coffee. 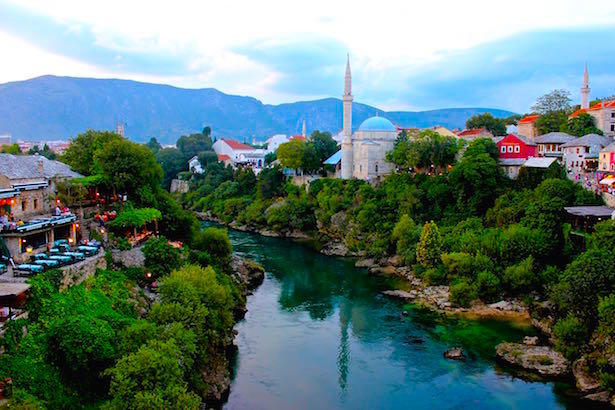 Is Mostar in Bosnia & Herzegovina on you bucket list?
If you have been, tell us your tips and favorite adventures. 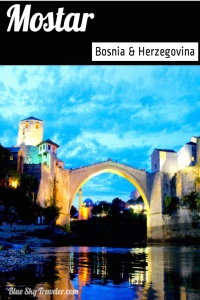 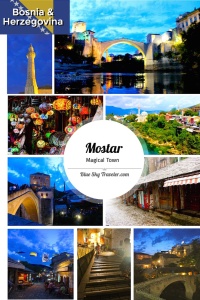