Best Italian Movies to Inspire your next Trip

Take a trip to Italy through the movies.

My favorite movies set in Italy feature the gorgeous light and landscapes throughout Italy. The Italian coastlines of the Amalfi coast and Sicily, the Tuscany landscapes and the history and architecture of Rome, Florence, & Venice provide stunning backdrops for these movies and TV series.

If these movies don’t inspire you to book your trip, I don’t know what will! Make yourself a bowl of pasta, a cappuccino or a bowl of gelato and enjoy!

A Room With A View tells the tale of Lucy Honeychurch, a young upper-class woman who travels to Italy under the watchful eye of her cousin Charlotte. For Lucy, Florence is a world of possibilities and vitality, far from the restrained culture of Edwardian England, and she explores the city’s key sights from the Church of Santa Croce to the Piazza della Signoria.

This movie was my first impression of Florence and I can’t visit without finding a Room with a View!  I adored this movie as it captured all the romance and beauty of traveling in the age of the Grand Tour.

Tuscany locations: The film in primarily filmed in Florence with scenes of the piazzas and churches. The hotel where Lucy and Charlotte stay in the film, the Pensione Bertolini (Hotel Degli Orafi), can be found on the banks of the Arno. There are also scenes in the Tuscany countryside and San Gimignano.

This is a semi-autobiographical story of young Italian boys upbringing by a circle of British and American women before and during World War II. The locations are stunning as well as the boisterousness of ex-pats in Italy.

Frances Mayes (Diane Lane) is a 35-year-old San Francisco writer whose perfect life has just taken an unexpected detour. Her recent divorce has left her with terminal writer’s block and extremely depressed. Her best friend, Patti (Sandra Oh), gifts here a trip to Tuscany. Frances, on a whim, purchases a villa named Bramasole in Tuscany. As she flings herself into her new life at the villa in the lush Italian countryside surrounded by olive groves, sunflower fields, fruit trees and vinegars she discovers the authentic pleasures of Italian life as she makes new friends among her neighbors. In the quiet moments, she is fearful that her ambitions for her new life–and new family–may not be realized, until a chance encounter in Rome throws Frances into the arms of an intriguing Portobello antiques dealer named Marcello (Raoul Bova).

What woman did not dream of escaping to Italy after watching this movie!

Tuscany Locations: Cortona. The author still has her home “Bramasole” there, but the movie was filmed in another villa (Villa Laura), Montepulciano.

Overwhelmed by her suffocating schedule, touring European princess Ann (Audrey Hepburn) takes off for a night while in Rome. When a sedative she took from her doctor kicks in, however, she falls asleep on a park bench and is found by an American reporter, Joe Bradley (Gregory Peck),who takes her back to his apartment for safety. At work the next morning, Joe finds out Ann’s regal identity and bets his editor he can get exclusive interview with her, but romance soon gets in the way.

Roman Holiday is the film that introduced Audrey Hepburn to the world and made her an instant star.  Audiences everywhere fell in love with her, and she won an Academy Award for her performance.  Roman Holiday also introduced American audiences to the Vespa, sparking its popularity.

Set in Roman times, the story of a once-powerful general forced to become a common gladiator. The emperor’s son is enraged when he is passed over as heir in favor of his father’s favorite general. He kills his father and arranges the murder of the general’s family, and the general is sold into slavery to be trained as a gladiator – but his subsequent popularity in the arena threatens the throne.

For me, this movie brings the Colosseum to life and shows what Rome was life 2000 years ago.

Italy locations: The film is set in Rome, but filmed in England, Morocco, and Malta with a few scenes in the Val D’Orcia in Tuscany near the walls of Pienza where Russell Crowe touches the fields.

Gilbert’s novel follows her year long journey to Italy (Eat), India (Pray), and Bali (Love) as she takes a year for self-examination and immerses herself in each culture to spark magic and joy back in her life.  The book and movie both highlight the beauty of Italy and its nuances including wanderings through Rome, gelato decadence and pizza in Naples.

Rome locations: Elizabeth’s Rome Apartment can be found at 18 Via dei Portoghesi. Eat gelato from the organic chain San Crispino gelateria by the Chiesa di Sant’Agnese in Agone in Piazza Navona.  Eat spaghetti at Caffè della Pace in Via Della Pace as Elizabeth did with her Italian teacher or Osteria dell’Antiquario and Ristorante Santa Lucia, both of featured in the film.

Tom Ripley (Matt Damon) lives in a shabby brownstone in New York City and works as a casual extortionist when he meets Herbert Greenleaf. Herbert, the father of Tom’s onetime acquaintance Dickie Greenleaf (Jude Law), is desperate for Dickie to return from Europe, where he’s living as a painter in a small Italian village called Mongibello with his beautiful expatriate girlfriend, Marge Sherwood (Gwyneth Paltrow). Tom befriends the couple and you would never suspect the dangerous extremes to which Ripley will go to make their lifestyle his own.

Though a crime thriller, the beginning of the movie is idyllic and highlights the charm of the Italian coastline – blue waters and idyllic landscape of sun-drenched Italy in the late 1950s.

Italy location:  Ischia, largest of the three volcanic islands in the Bay of Naples and its tiny neighbour, Procida, both accessible by ferry from Naples or Sorrento. The film also has scenes in Anzio, Naples, Venice and Rom. The ‘Vesuvio’ nightclub, supposedly in ‘Naples’, where Dickie and Ripley perform Tu Vuo’ Fa L’Americano is the Caffè Latino, Via Monte Testaccio 96.

A childhood incident has convinced Faith Corvatch (Marisa Tomei) that her true love is a guy named “Damon Bradley,” but she has yet to meet him. Preparing to settle down and marry a foot doctor, Faith impulsively flies to Venice with her BFF (Bonnie Hunt) when it seems that she may be able to finally encounter the man of her dreams. Instead, she meets the charming Peter Wright (Robert Downey Jr.).

During an impromptu trip to Europe to mend a broken heart, community college math teacher Frank Tupelo (Johnny Depp) finds himself in an extraordinary situation when an alluring stranger, Elise (Angelina Jolie), places herself in his path on the train to Venice. What Frank doesn’t know about Elise: Elise is the lover of Alexander Pearce, a man who owes millions in taxes to England and who stole billions of dollars from a vicious mobster named Shaw. Elise got a letter from Pearce with explicit instructions to flirt with a stranger on the train and let those pursuing him believe that the strange is, in fact, Pearce. A seemingly innocent flirtation for Frank turns into a dangerous game of cat and mouse while various people try to capture the pair.

The scenery and costumes highlight the elegance of Venice.

When exiled Cuban poet Pablo Neruda (Philippe Noiret) arrives on a tiny Italian isle, there’s so much new mail that Mario (Massimo Troisi), an unemployed, uneducated layabout, is hired as a postman. His job is simply to deliver Neruda’s daily mail. Mario soon becomes a student of the poet, influenced by Neruda’s political views and learning the art of poetry to woo a local barmaid (Maria Grazia Cucinotta). A firm friendship develops, and the postman turns into a changed man as he writes his own poetry and tells about the struggles of the working-class villagers.

The TV series (2 seasons / 22 episodes) is based on real life historical figures and follows the life of two soldiers Lucius Vorenus and Titus Pullo in Caesar’s Commentarii de Bello Gallico, who find their lives intertwined with key historical events.
The first season begins with Julius Caesar’s civil war of 49 BC against the traditionalist conservative faction in the Roman Senate (the Optimates), his rise to dictatorship over Rome, and his fall, spanning the time from the end of his Gallic Wars (52 BC) until his assassination on 15 March 44 BC (the infamous Ides of March). Against the backdrop of these cataclysmic events, we also see the early years of the young Octavian, who is destined to become Augustus, the first Emperor of Rome and Cleopatra.

The series follows the rise of the Borgia family as Rodrigo Borgia is elected as head of Roman Catholic Church becoming Pope Alexander VI. This pope maintained power in the through corruption, bribery, and murder thought he help of his sons, Juan and Cesare and his daughter Lucretia. 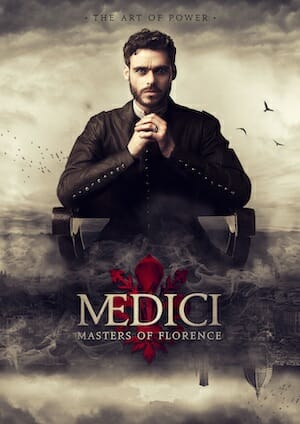 The Medici – the powerful family of the Renaissance period in Florence. Their banking practices led to the creation of a middle class while making themselves extremely wealthy. They used this wealth to challenge traditional thinking, ushering in a new era of revolutionary art and science such as the world had never seen including public libraries and sponsorship of some of the greatest artists & scientists including Michelangelo, Raphael, Donatello, Botticelli and Leonardo da Vinci, Brunelleschi, and Galileo. 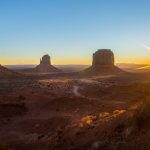 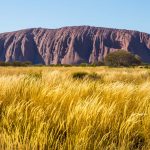 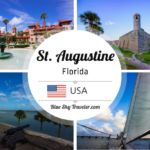 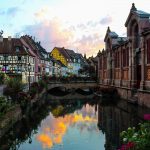 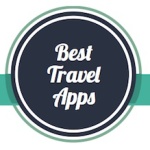 Looking for a Travel Guide Book about Italy? 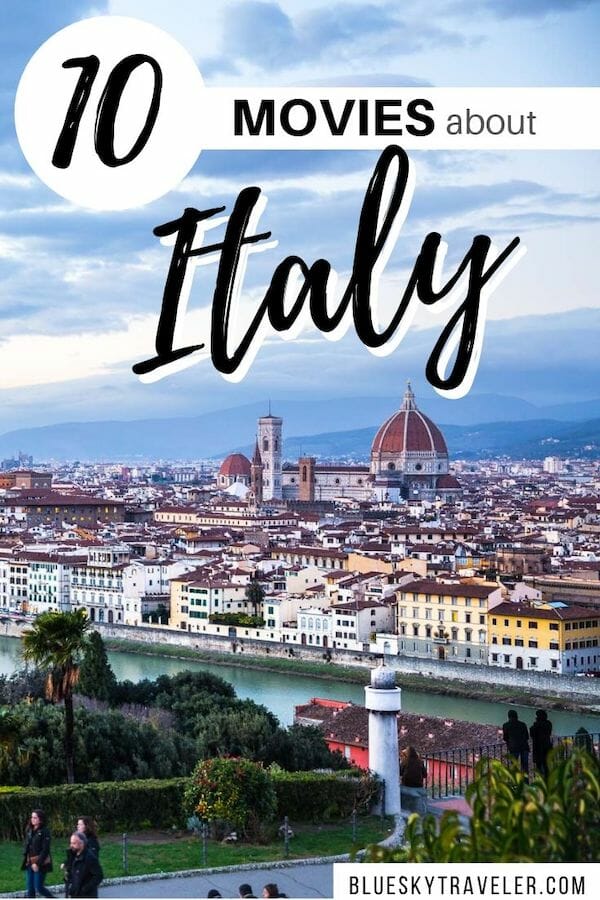 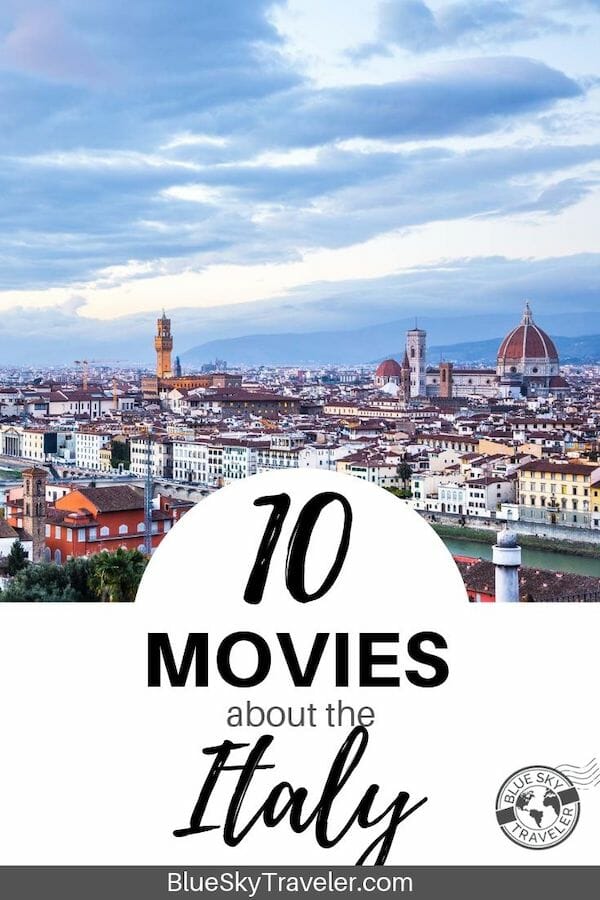 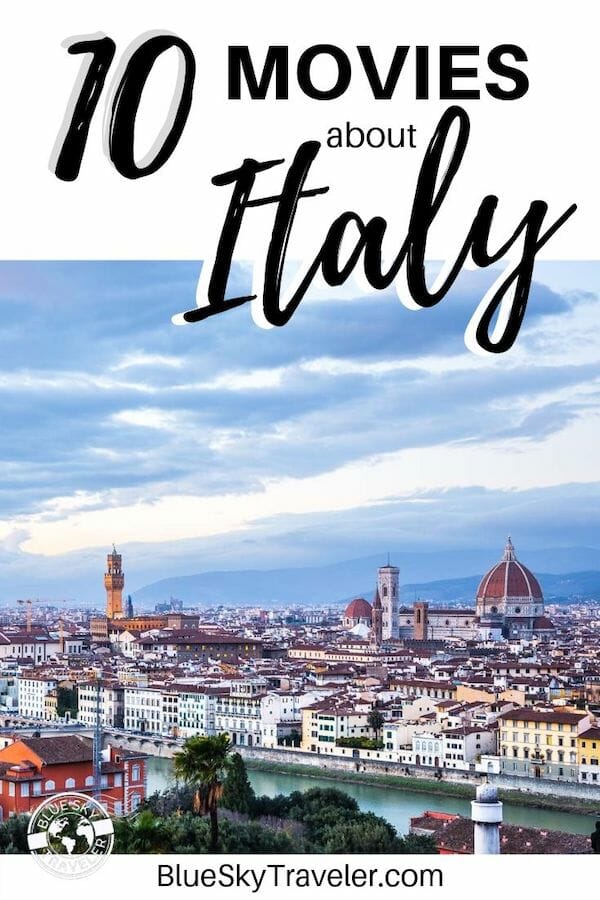 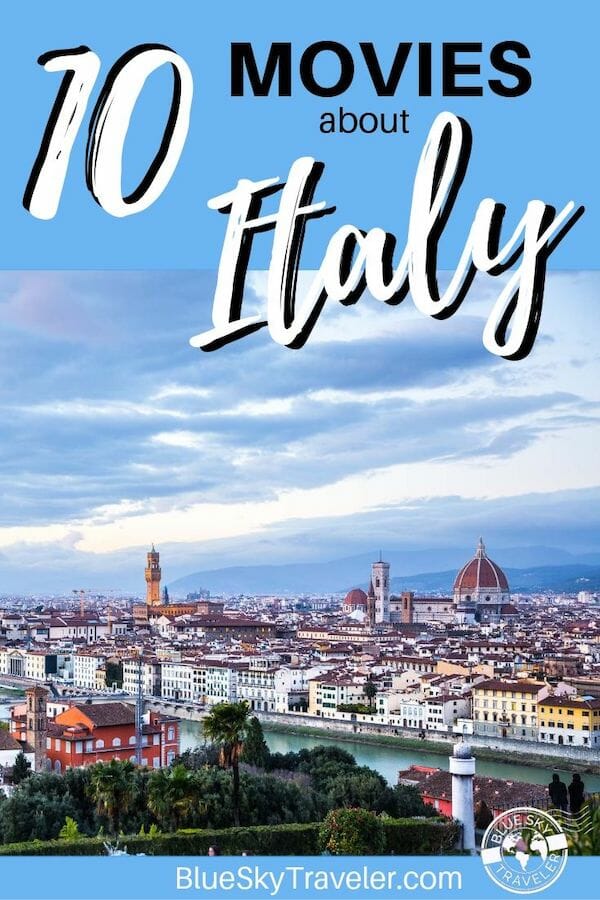 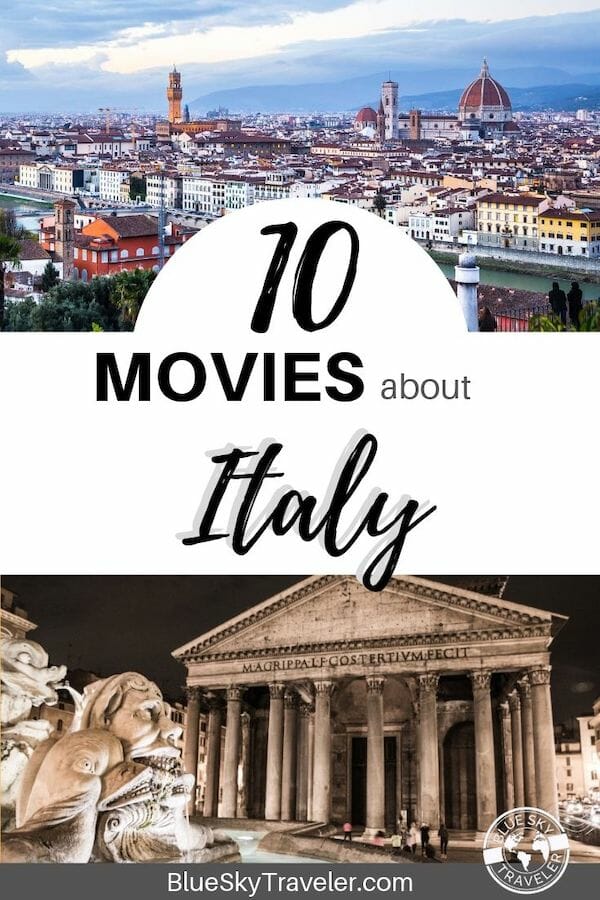 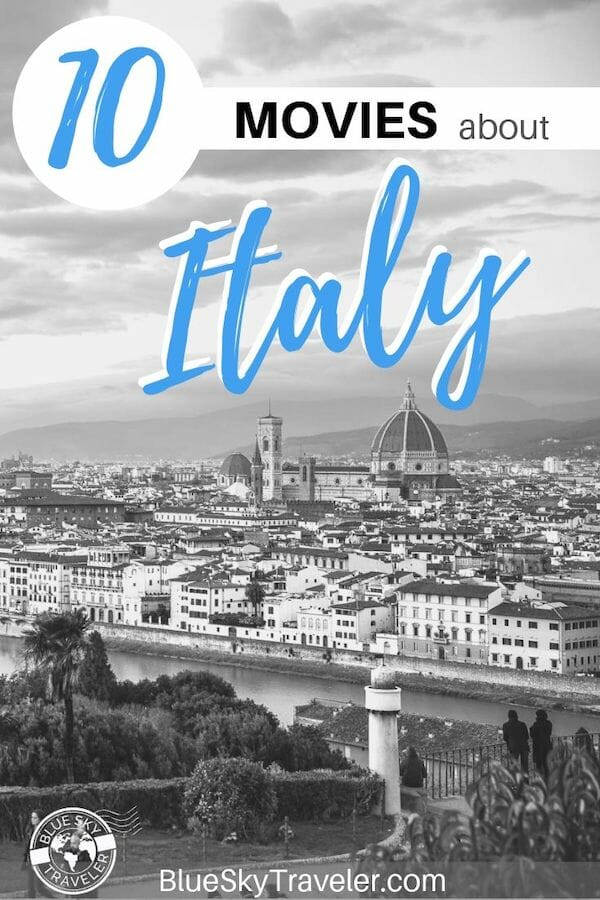 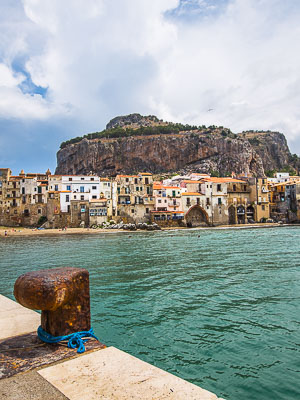 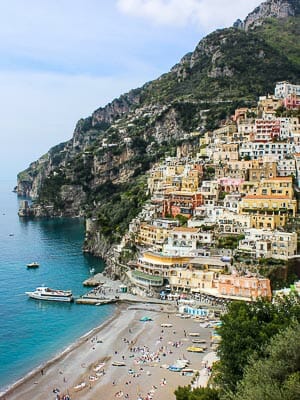 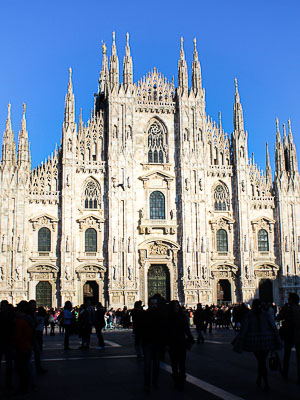 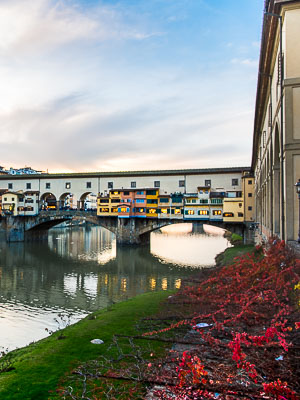 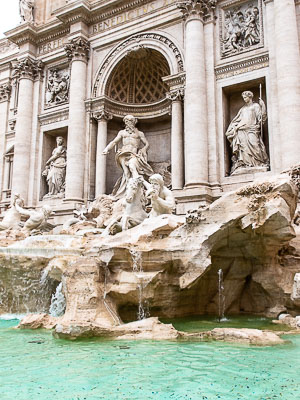 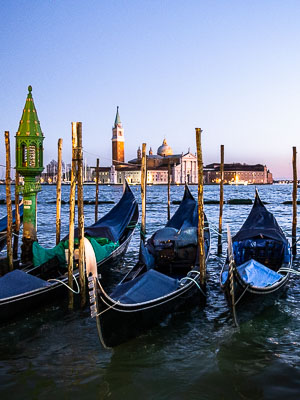 Movies in Venice to Watch before your Trip 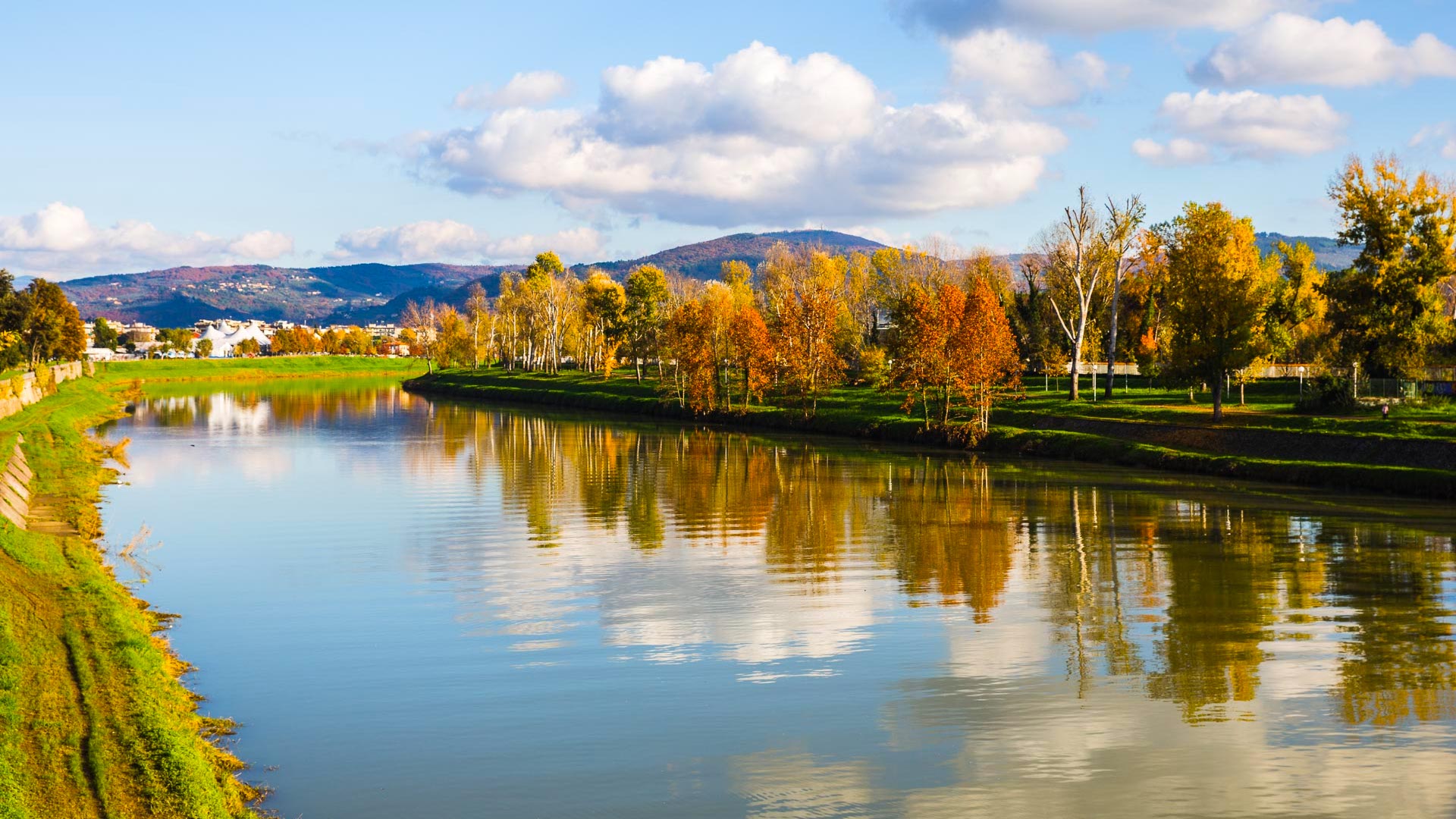