Serbia, on the crossroads of European history, includes the remains of several empires: Romans, Byzantine, Ottoman, Turkish, Austro-Hungarian to name a few.  The result is a layering of historical finds intermingled with a strong Serbian cultural identity.

I have to admit that as a Westerner, I had little knowledge of Serbia except the images from Belgrade in the breakup of Yugoslavia.  Upon arrival, I found the same hospitality seen throughout the Balkans.  Serbs are not only very warm & welcoming (and tall), they also have a gusto for living and are always ready for a party.  With three UNESCO sites and another twelve on the tentative list, there are more than a Top 10 of historical and natural sites to see and experience surrounded by Serbian culture.

Top 10 Sites to See in Serbia

Belgrade is the capital of Serbia and the former Yugoslavia.  Called the White City, its foundation dates back to the Vinča culture in 6th century BC.  You can still see 2nd century AD Roman foundations under Belgrade Fortress in Kalemegdan Park.   Belgrade’s tourism has rebounded in the last 10 years post the wars of the breakup of Yugoslavia and is now known for a vibrant night life. The rapid growth of the last few centuries (89,000 in 1910 to 1.6Million today) can be seen in this sprawling city with architectural sites including the Cathedral of Saint Sava (Serbia’s largest Orthodox structure), the 19th century Belgrade Cathedral and at several museums including the Nikola Tesla Museum.

Novi Sad, the second largest city in Serbia at 400,000 is a more relaxed atmosphere in contrast to the big city vibe in Belgrade. At the centre of Novi Sad is Freedom square (Trg Slobode), surrounded by the neo-Gothic Catholic Church of the Virgin Mary and the neo-Renaissance town hall. Novi Sad spreads out in sprawling parks and a low-key café culture until the summertime Exit Festival at Petrovaradin fortress that draws upward of 200,000 attendees in one of the Balkans’ largest festivals.

One of the oldest cities in the Balkans dating from 279 BC, Niš is often considered that gateway between Central Europe and the Middle East.  Highlights include visiting the 4th Century Mediana Birthplace of Emperor Constantine the Great, the central square Trg Kralja Milana, Niš fortress, and the 19th century Skull Tower, constructed by Turks in the 19th century from the skulls of Serbs defeated at the battle of Cegar.

Subotica, on the northern border is rich with examples of late 19th century Art Nouveau Hungarian architecture. The central square Trg Republike has one of the most ornate Town Halls. Other examples of this architecture include the Piraeus Bank and the Synagogue.  The city is multicultural (Hungarian/Serbian/Croatian) and has a very unique flavor of culture. Close by is the lakeside town Palić.

The Studenica Monastery is one of the most impressive of all Orthodox monasteries in Serbia. Founded in 1190, the site has two churches: the Church of the Virgin, and the Church of the King, both constructed using white marble with an interior of 13th-14th century Byzantine-style fresco paintings.

Gamzigrad is the site of a massive Roman complex of palaces and temples covering 10 acres. The site is called the Felix Romuliana and was constructed by the Emperor Galerius in the 3rd century AD. It consists of the remains of 2 temples, 2 palaces, mosaic corridor depicting the Greek gods Dionysos and Medusa, baths and some impressive gates. The complex of temples and palaces served three main purposes – a place of worship of his mother’s divine personality, a monument to his deeds as emperor, and a luxurious villa for Galerius.  Felix Romuliana is a popular tourist stop on the Roman Emperors’ trail which links the birthplaces of over 17 Roman Emperors born on the territory of modern Serbia.

Devil’s Town, Djavolja Varos, is a unique group of 202 rock formations on Radan Mountain, near Kuršumlija. These rock monoliths jut from the earth 6 to 45 feet tall and up to 18 feet in width. The formations are the result of volcanic activity and a million years of erosion has produced such an intriguing site. There are also two natural spring beneath the formations: Đavolja voda (Devil’s Water) & Crveno vrelo (Red Well).

Devil’s Town is on the tentative UNESCO World Heritage List.

Novi Pazar, the last stop before Kosovo, is distinctly Turkish in heritage and a center of Bosniak culture and life in Serbia. This areas has both Christian and Muslim monuments including the UNESCO site Stari Ras, the former capital of the Serbian state and the Byzantine influenced Monastery of Sopoćani. Also in this town is a 17th century Turkish fortress and the 15th century Turkish bath, the oldest in Serbia.

The gorge narrows the river to 300 feet wide with a depth of 174 feet. East of this site the Roman emperor Trajan had commissioned the legendary bridge erected by Apollodorus of Damascus. Construction of the bridge ran from 103 through 105, preceding Trajan’s final conquest of Dacia. On the right (Serbian) bank a Roman plaque commemorates him. On the Romanian bank, at the Small Kazan, the likeness of Trajan’s Dacian opponent Decebalus was carved in rock from 1994 through 2004.

Tara National Park is one of the best preserved and well-kept in Europe with forests making up three-quarters of the park’s area.  Many species roam the park including bears, wolves, eagles and falcons.   The main tourist base is Kaluđerske Bare, from where you can explore Tara Mountain (~4500 feet) and the Zaovine Lake.

Is Serbia on your bucket list?
If you have been, tell us your tips and favorite adventures. 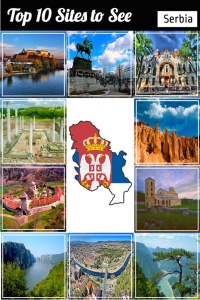