Tower of London: Ceremony of the Keys

The Ceremony of the Keys

Who wants to lock up the Tower of London in the world’s oldest continuous military ceremony?  Welcome to the Ceremony of the Keys! I have been very fortunate to have had the opportunity to visit London about a dozen times by now. Thought often for work trips, I have been able to squeeze in many of the tourist sites.  So for this trip, I was looking for an even more unique experience when I heard about the Ceremony of the Keys. I immediately wrote away to get an Entry Pass for myself and my friend for our upcoming trip. A few weeks later it arrived in the mail. I love getting actual mail that is not a bill and a letter from the United Kingdom was even better. (Tickets are now available online as of 2015) We toured the Tower of London during the afternoon, headed off to St. Paul’s for Evensong & dinner at Jamie Oliver’s with views of St. Paul’s dome. Then it was back to the Tower to be there early as latecomers are not allowed in. At precisely 21:30, one of the Yeoman guards took our tickets and escorted the small group of about 20 people into the Tower of London.  He gave us a quick overview of what would occur and reminded us that no photography was allowed…. or cell phone use…. and above all to stay in the designated area as the guards will walk over you. The ceremony has occurred for 700 years with only 1 delay (See below), so a tourist was not going to stop it. What Happens during the Ceremony of the Keys?

Every night, for about 700 years, the Yeoman Warders have performed a gate-closing ritual known as the Ceremony of the Keys at the Tower of London.  The Tower of London still houses the Crown Jewels.

At exactly 21.52 the Chief Yeoman Warder of the Tower comes out of the Byward Tower, carrying a candle lantern in one hand and the Queen’s Keys in the other hand. He walks to Traitor’s Gate to meet members of the duty regiment Foot Guards who escort him throughout the ceremony.

They then return along Water Lane towards the Wakefield Tower, where in the deep shadows of the Bloody Tower archway a sentry waits and watches. As the Chief Warder and escort approach, the sentry’s challenge rings out.

All four men walk to the Bloody Tower archway and up towards the broadwalk steps where the main Guard is drawn up. The Chief Yeoman Warder and escort halt at the foot of the steps and the officer in charge gives the command to the Guard and escort to present arms.

The Chief Yeoman Warder moves two paces forward, raises his Tudor bonnet high in the air and calls “God preserve Queen Elizabeth.” The guard answers “Amen” exactly as the clock chimes 10pm and ‘The Duty Drummer’ sounds The Last Post on his bugle.  The Chief Yeoman Warder takes the keys back to the Queen’s House and the Guard is dismissed.

This last part of the ceremony where The Last Post is played on the bugle was the most memorable part. The soldiers in red and blue uniforms are standing on the stairs through the archway. With the fog rolling in, it felt like you are in a secret ceremony. There is only one time in the 700 year old history of this ceremony that it was delayed. During World War II in one of the London air raids, a number of bombs fell onto the old Victoria guardroom as the Chief Yeoman Warder and the escort were coming through the Bloody Tower archway.  The guards stood up and dusted off their uniforms to continue the ceremony, but it was delayed.  The Officer of the Guard sent a letter of apology to King George VI offering his resignation. Of course, King George VI replied via letter that the officer was not to be punished as the delay was due to the German bombs. (These letters of apology is stored at the Tower) After the ceremony, you are escorted out through a small door that has been cut in the big wooden gate which remains locked.   The small doors which are about 4 feet high (You have to step through them) were cut into the big doors hundreds of years ago to still allow people in post curfew without opening up the entire gate… and the guards still want a way to get pizza delivery at night. My Review My friend and I really enjoyed seeing the ceremony. I think tradition and ceremony is an important part of life that we are losing more and more in our tech-centric society, so I really enjoyed seeing this part of English history.  Also, being in the Tower of London in the evening, especially on a foggy night was a eerily fun experience. I have read so many English history books where prisoners, royalty and secret meetings occur at the Tower of London… takes you right back into history.  A must see if you can get the tickets! 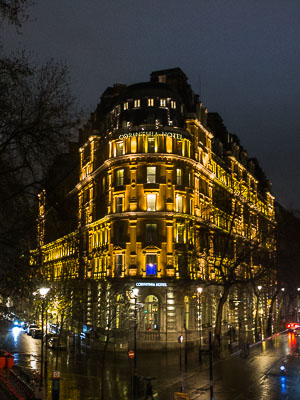