During my week in Helsinki, I observed and discovered many differences in how the Finn’s do things including some quirky interests making them Uniquely Finnish. As you travel, you quickly discover how easy it is to adapt to your new surroundings and local way of life – finding food, navigating the cities to get from A to B, and enjoying the company of good people in every country.  However, as you observe this new country and culture, the differences that are just common place to locals, will definitely grab your attention…. especially in Finland. During my week in Helsinki, I found many #HelsinkiSecret’s and examples of what they called “Finnwhackiness” including these fun and quirky interests of the Finn’s.

My first day in Helsinki, I dropped my bags at the hotel and headed directly to the City Center to see some of the main sights and start walking off my jetlag in Helsinki’s ~6 hours of daylight during the winter.  The thing about Helsinki that struck me immediately was the quaintness of this European capital city. The city has a population of ~600,000 with 1.4 Million in the metro area where 1 of every 5 Finn’s live. The streets however do not feel crowded. In the main square, Senate Square, where the grand Lutheran church towers over the city, there were kids having snowball fights and sledding down the stairs. 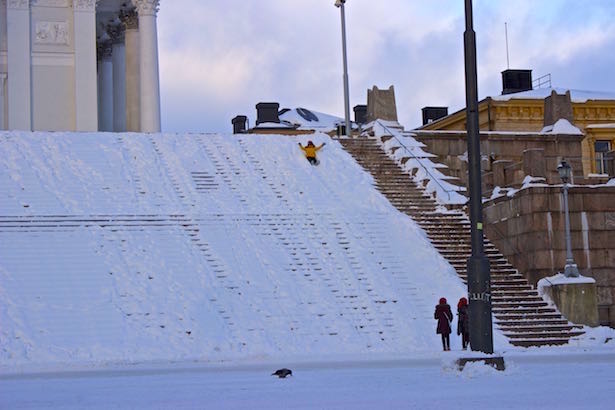 The Finnish language is quite unique especially for this region of the world. It is a Uralic languages most closely related to Hungarian as opposed to its neighbors Swedish or Russian. Finn’s were farmers and lived quite remotely so their language roots stayed strong and their language unique. The language is phonetic and “should be” easy to pronounce, but for me the words are long with lots of vowels that will tie up your tongue.  When I travel to Western Europe, I can usually pickup words from Romantic Languages (French, Spanish, Italian) and get by, but in Finland I was saved by the fact that most Finn’s speak English… perfectly! A few words I did pick up:

As one new Finnish friend told me when I admitted I was having a hard time learning the Finnish words – “Sauna is the only word you need to know”.  This is what the Finn’s are most known for, and I thoroughly enjoyed multiple visits to the wood saunas. Finn’s take it up a notch. After a shower and a sit in the wood sauna to build up the heat, they go out in the snow or take a plunge in the ice lake. Rinse & repeat. In Helsinki, check out one of the public sauna’s dating back to 1953 –  Sauna Hermanni.  Their saunas are separated by male and female and they also have combined days where the women can join the men’s side.  They serve snacks and it makes for a nice leisurely afternoon/early evening to warm up and recharge. 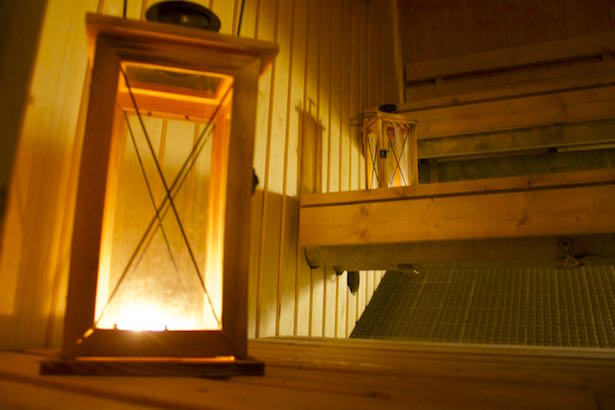 Moomin’s – these little cartoon characters are everywhere.   The Moomin characters were created by Tove Jannson in the 1930’s as part of a cartoon strip. She went on to create a popular book series and the cartoons infiltrated popular Finnish culture in a TV series and merchandising – coffee cups, purses, clothing etc. If you ask the Finn’s, everyone seems to have a Moomin character (Similar to how American relate to Winnie-the-Pooh characters) and though the books are for children there are political undertones (Similar to American Dr. Seuss books). Check out the boutique IvanaHelsinki for some unique Moomin finds! 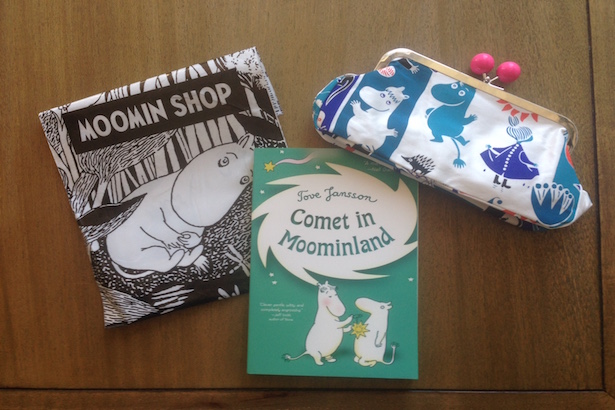 The winters may only provide about 6 hours of daylight in Helsinki, but the designers have countered that with happy design style.  Meet Marimekko!  This Finnish designer started in the 1960’s and is known for large and colorful flower prints. The Marimekko empire has gone beyond fashion to home decor. The stores are sprinkled throughout the city and Americans might recognize the brand from its Marimekko campaign with Banana Republic in 2015. 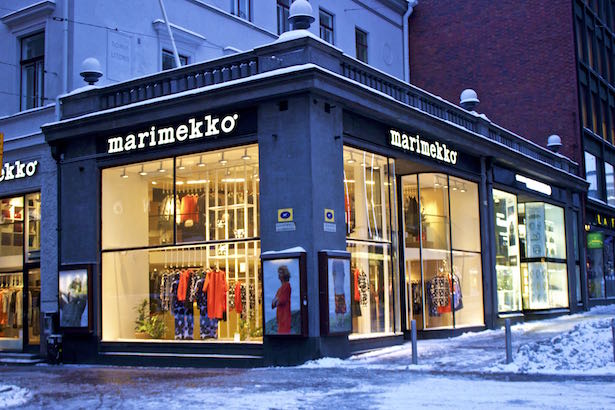 While I did not get to experience these, I took notes on some of their crazy contests for future visits:

The rumor on the street was that the Finn’s loved their karaoke so I headed over to the Pata assa karaoke bar for a night of music. They were singing mostly Finnish songs and what I was surprised to find they were mostly ballads. Though I could not understand the words, the music was telling the story of mostly men (and a few women) crying their souls out. I asked some Finnish friends later to see if I had gone on a theme night, but they confirmed that these were the popular Finnish songs and a typical Karaoke night.

Perhaps the love of Finnish love ballads at Karaoke bars in Helsinki is balanced by the Finn’s love of Heavy Metal. This was confirmed for me on my flight from JFK to Helsinki with some of the band Suicidal Tendencies.

How about accommodations at the local jail? If you would like to try it out, Best Western has converted the former Helsinki Jail into a hotel, Hotel Katajanokka, where you can reserve a jail cell (three cells combined for a room accommodation) for an overnight stay. You can also visit the hotel and have cocktails in the prison yard or dine in the cellar next to the isolation cells – Creepy! 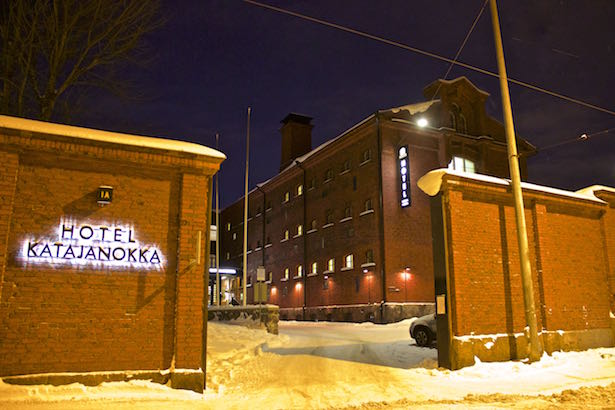 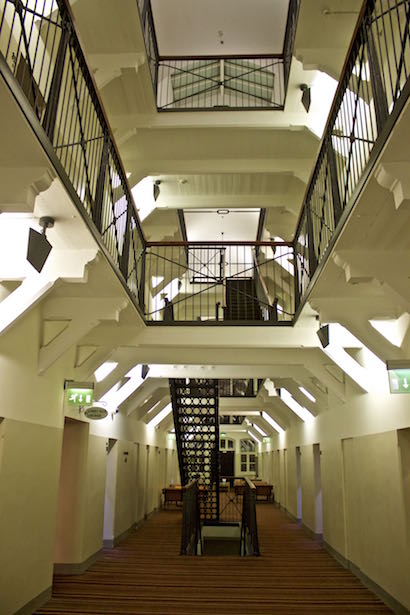 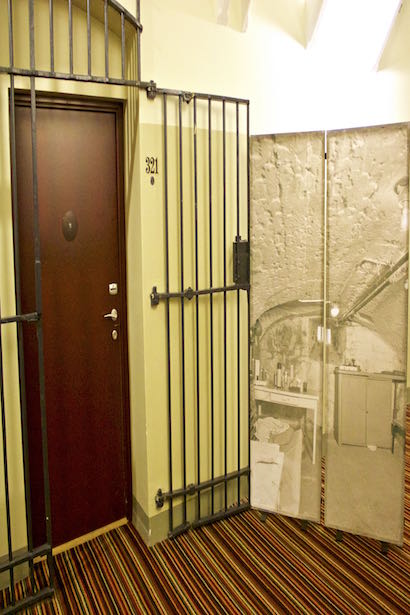 My last observation of the Finnish was how polite they were.  I walked the streets of Helsinki for a week and was never bumped once.  Coming from a stop-over in New York, this stood out!  Maybe it was the cold (I was there during a cold week, even for the residents of Helsinki), but it was almost strange how quiet this city was as people came off trains, buses and trams and moved along to their destinations. This is not to say that they are not some of the nicest people. Once you engaged in a conversation with one of the Helsinki residents, you were in for a lively conversation. Everyone whom I talked to and/or asked for advice graciously and enthusiastically replied from helping me pick out some pastries at Stockmann‘s, directions, and advise on their favorites in the city of Helsinki. BlueSkyTraveler was welcomed as a guest of Visit Helsinki #HelsinkiSecret, however all opinions are my own. 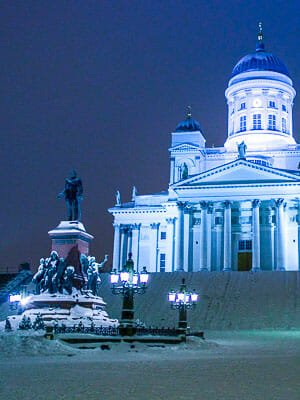 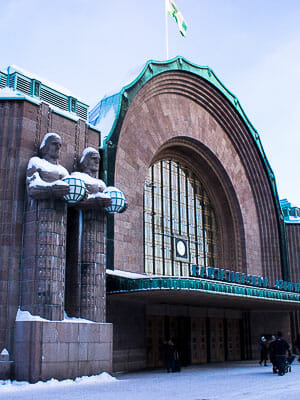