The Northern Lights in Tromso Norway

For many, seeing the Northern Lights is at the top of their “Bucket Lists”; And it was near the top on mine.  I have long wanted to see this strange phenomena where green, red, purple, and blue lights light up and dance across the sky unpredictably – a sheer force of nature. 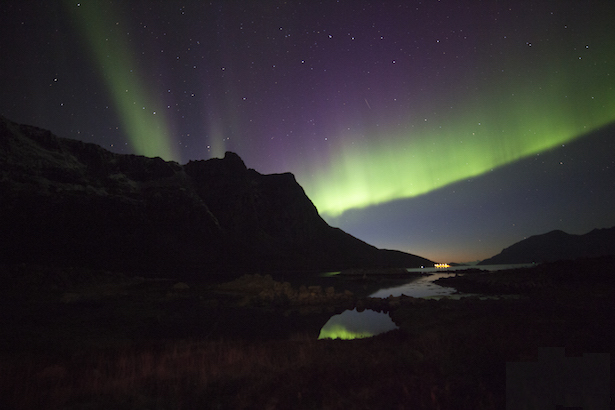 To see the Northern Lights, I decided to travel to Tromso, Norway. Since I was ending my Baltic cruise in Copenhagen, Denmark, this was a quick flight on Norwegian Air: Copenhagen -> Oslo – Tromso.  There is no guarantee that any particular night will reveal the Northern Lights, so you either have to be really flexible with an open booking or be really lucky. From my research though there were some recommendations for a better chance: 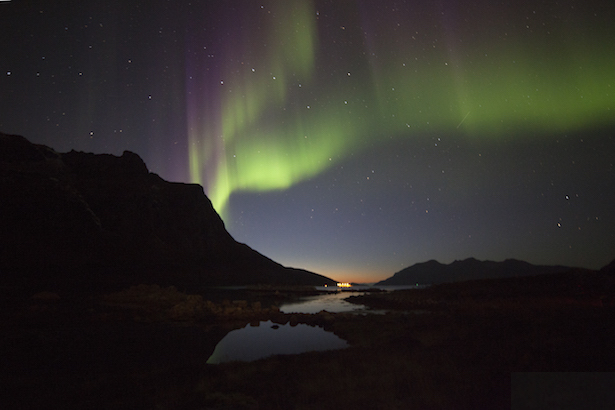 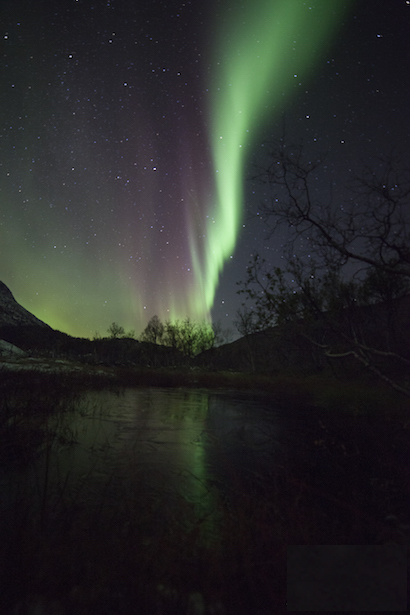 The Northern Lights, a natural phenomena otherwise known as the aurora borealis, is technically caused by charged particles entering the atmosphere causing ionisation and excitation of the atmosphere resulting the optical lights. The term “aurora borealis” was coined by Galileo in 1619 – aurora (Roman goddess of dawn) and borealis (the north wind). The most common color we saw was GREEN, but also you may see of REDS/PURPLES and YELLOW/PINKS and BLUES.

I arrived in too late the first night due to some flight delays to jump on a tour the first night. It was a little rainy so it would probably not have been optimal anyways. The next morning, I walked down to my first choice for a tour service – Arctic Guide Service.  After reading all the reviews on TripAdvisor, this seemed to be a good, reliable service at one of the moderate price points. I love to take photos and had my tripod, but for my first and hopefully not last viewing of the Northern Lights, I was happy to go with a crowd and just get out there and see it.

I was not disappointed.  Especially with our guide Ricardo who is highly praised on TripAdvisor. He was friendly, upbeat and happy to help answer questions about the Northern Lights, take your Selfie Photo, and help with your camera settings.

The office said that tonight looked good and clear and to come back at 8pm, so I reserved my spot.  Arriving back at the office in the evening, there were about 25 people ready to go out. We loaded up on the bus and started out of town. Though Tromso is a small town (~70,000 people) the town is spread out and the light pollution makes seeing the Northern Lights difficult.

We were immediately in luck as we started to see the green haze of the Northern Lights after about a 20 min drive out of town. We stopped on the side of the road and all jumped out for our first photos. Ricardo helped with the camera settings for aperture and shutter speeds.  You will definitely need a tripod and a remote helps also for more clear photos.

We stopped in 4-5 locations near lakes and snowy mountains (Tromso received an early frosting of snow the week before). The auroras seemed to slowly crawl and twist across the sky, sometimes in a horizontal sunset and other times directly growing above us like a tornado or a rainbow. 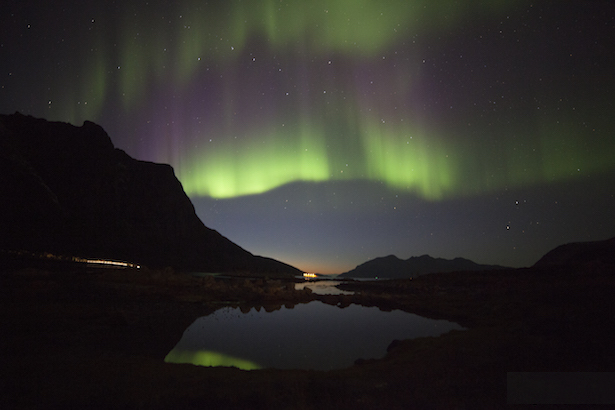 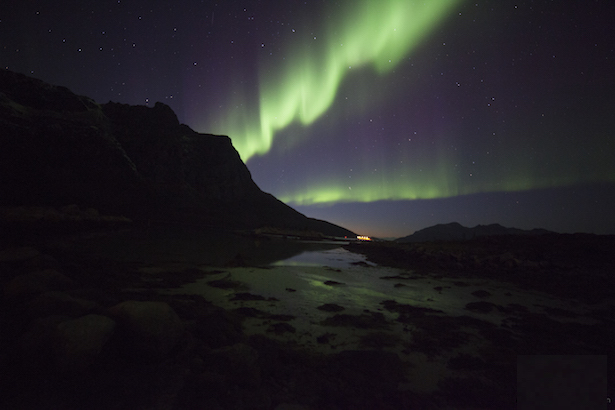 I found a fellow America, Caroline, and photoshooting buddy who was willing to stand out in the cold for an hour at a time. We would setup our tripods facing opposite directions while the sky was dark waiting for the aurora to appear and chat while having lookouts in both directions to make sure we did not miss it. 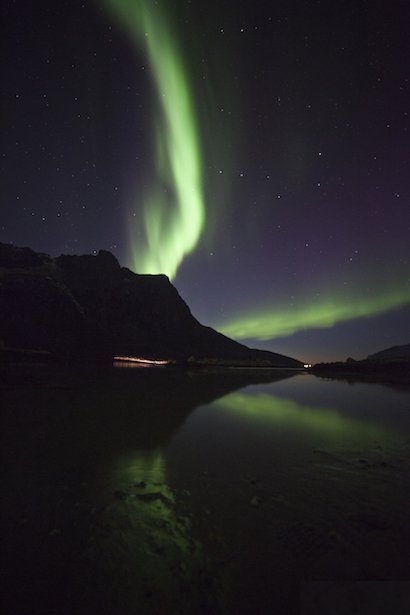 I will say most of the bus would take a look and then go back on the bus, so there were only about 5 die-hards standing out in the cold and snow patches to watch every bit of the show.  The guide service kept the coach toasty warm and also provided hot chocolate which was a much needed warm-up.  Even though it was late September is was 0 to -2 degrees Celsius and felt a TON colder as we were north of the Arctic Circle. 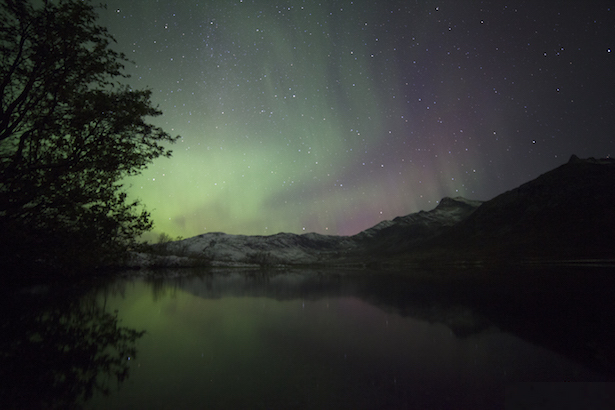 Our last stop at around 1am in the morning was a grassy field. We were all tromping through snow and low vegetation when the lights really came alive. They danced above us in a circle. The best way I can describe it is like an etch a sketch going really fast in vertical and horizontal movements in shades of Green, Yellow, Red, and Purple.  We all could not help but gasp with Ooooh’s and Aaaah’s as it moved in different directions.  These are virtually impossible to video without special equipment much less photograph, so we all just sat and watched in wonder.

At this moment, I said to my fellow photographers “I think that was THOR”. You could understand why so many cultures thought the lights were signs from God or their Gods.  The Norse mythology is that the lights are Valkryrior, warlike virgins who are mounted on horses with helmets and spears and ride forth across the sky. The armour creates the flickering light. 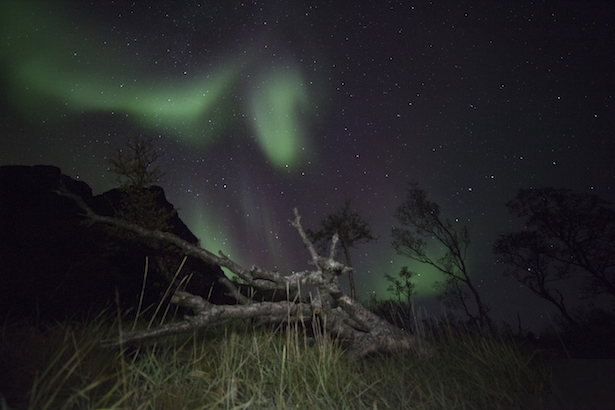 As you can see, we were all wearing LAYERS and LAYERS of clothes. I had about 7 layers on the top including a puffer jacket and a parka jacket on top of 5 other layers of mostly wool on top and about 3 layers on the bottom. I was bone cold by the time I returned home to my hotel at 2am…. but it was so worth it. 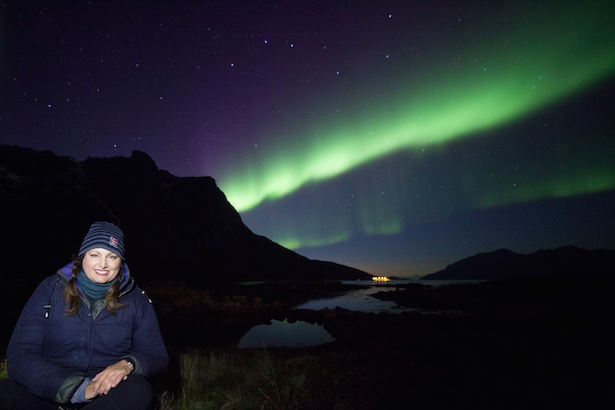 And have you every seen the stars and the Big Dipper so clearly. 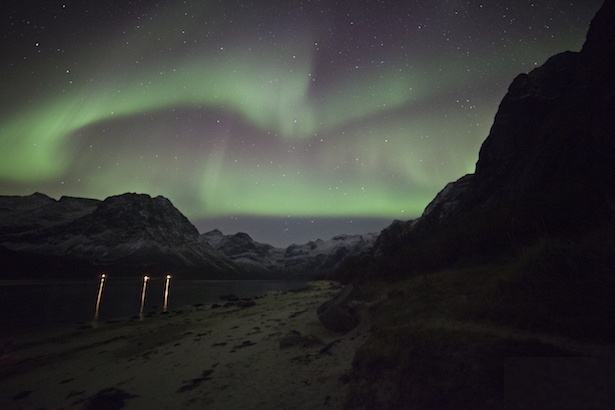 Inspired to visit the Tromso Norway? 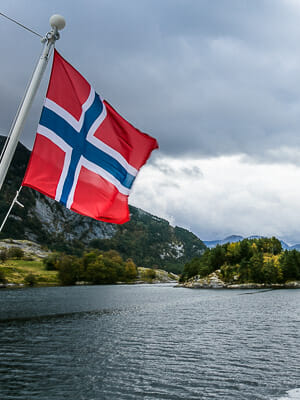