Visiting the D-Day sights in Normandy, I am overwhelmed with gratitude and pride to be American…. it is a privilege.  Today has been a lesson in history that I have been looking forward to and I am feeling truly honored to have spent the day in Normandy. I have watched the movies, read books and researched, but you do not understand the complexity and enormity of the operation, bravery & courage of the Allied Troops, and what a pivotal moment in history this was until you visit these sites along the coast of Normandy.

The 54 miles of Atlantic coast north of Bayeux — stretching from Utah Beach on the west to Sword Beach on the east — are littered with WWII museums, monuments, cemeteries, and battle remains left in tribute to the courage of the British, Canadian, and American armies that successfully carried out the largest military operation in history: D-Day. It was on these serene beaches, at the crack of dawn on June 6, 1944, that the Allies finally gained a foothold in France, the beginning of the end for the Nazi’s hold on Europe in World War II.

My grandfather was on one of the 5000+ ships in the English channel on D-Day so this day had even more meaning. I chose to take a group tour focusing on the American sites around Omaha and Utah beaches.  A post cannot come close to explaining the amount of information, emotions and feeling of this place and its one that I encourage all Americans to visit and pay their respects to.  Here are some of the pictures from the day:

The Batteries of Longues-Sur-Mer

The first stop was to the Atlantic Wall, a system of fortifications built by Nazi Germany which extended along the Atlantic coast of Western Europe. The batteries of Longues-sur-Mer are an example of the casemates of these batteries and a 152 mm German naval guns behind the control bunker and insight into what the Allies faced as they were trying to land on the beaches. 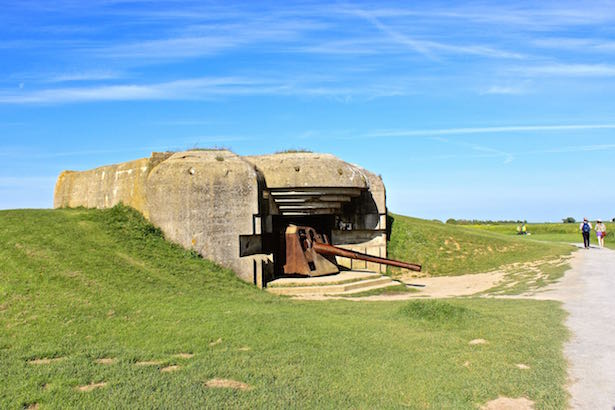 This bunker at another site of the tour shows just how entrenched the Germans were.  You can go inside many of these bunkers to see the viewpoints of the German soldiers and the overwhelming uphill battle the Allies had. 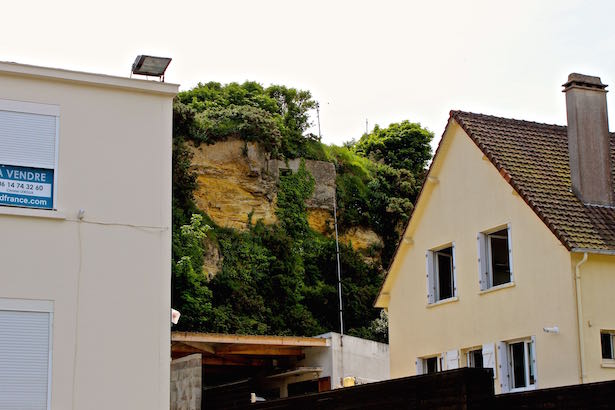 As we walked onto the beach in silence, our entire group had pits in their stomach’s.  You have seen this place depicted in so many movies but the amount of beach (depth and width) is overwhelming when you think of the odds and stakes that the Americans faced that day on Omaha Beach. Knowing that this was the place where so many Americans died, you can feel the gravity of what occurred and the place is haunting.These pictures are in the late morning & late in the afternoon at a higher tide than what the Americans faced when they landed in the early morning.  It is a wonder that they were able to overcome the odds. 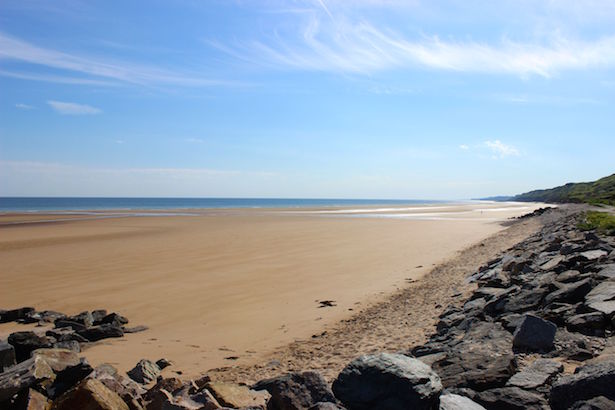 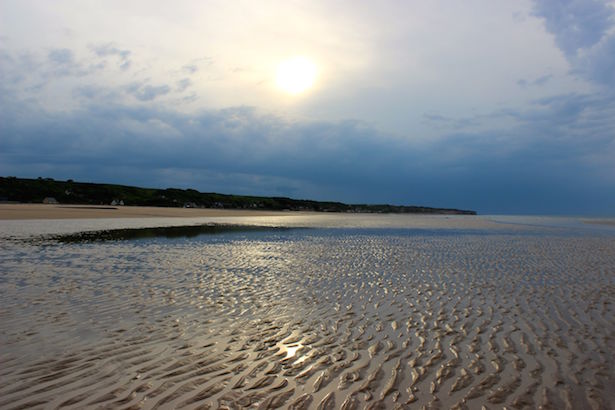 The view from “almost” the water’s edge up Omaha Beach in a panorama picture.

The Braves Memorial at Omaha Beach honoring all who died and fought for freedom. 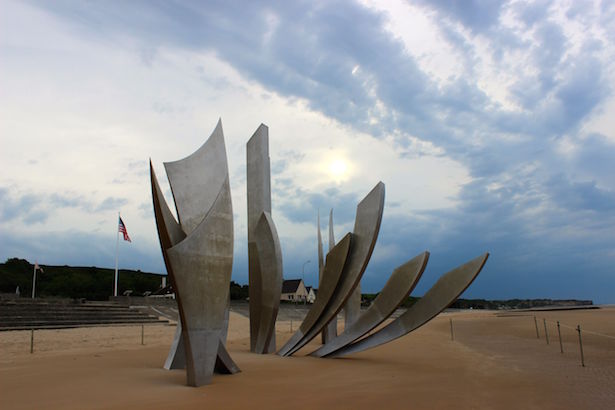 The most moving place visited on my tour, the Cemetery is actually American soil after it was given to the USA by France after WWII.  The Cemetery, extends over 172.5 acres, and is one of fourteen permanent American World War II cemeteries constructed on foreign soil. 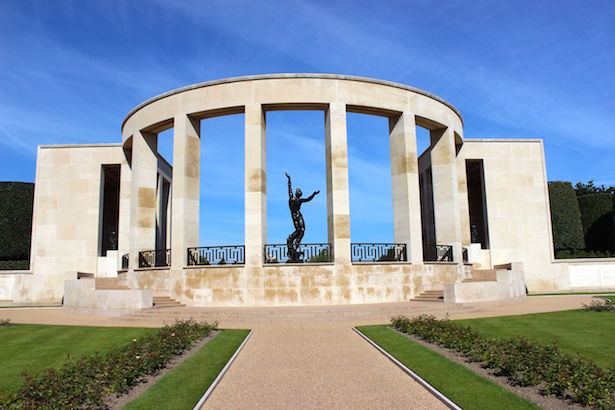 It contains the remains of 9387 servicemen and women killed for our freedom each with a stone white headstone in perfect rows. About 40% of Americans families have chosen to have their hero buried here alongside their brothers in arms. There are still hundreds of soldiers missing from that day. One soldier was found about four years ago when a carpark was being extended and he identified through dogtags. The American Cemetery creates an unforgettable feeling of honor, peace and serenity. 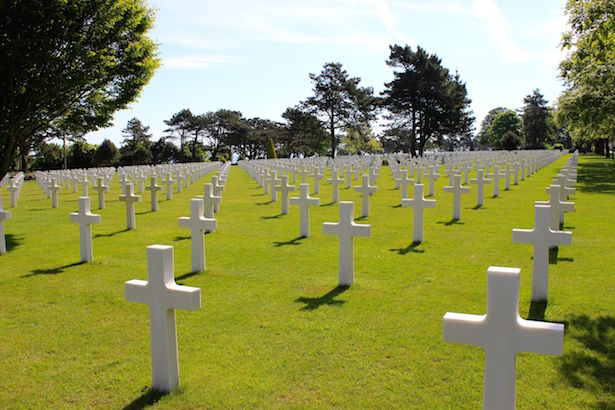 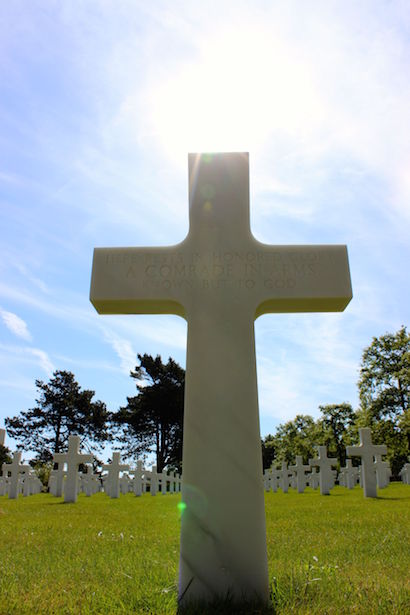 Sainte Mere Eglise is one of the most memorable places depicted in the famous movie: The Longest Day. At the center of the town is the famous church tower upon which the American paratrooper John Steele landed and became entangled as he parachuted into Normandy on June 6th. An actual mannequin of Steele has been hung with parachute on the church tower to commemorate his courageous jump. 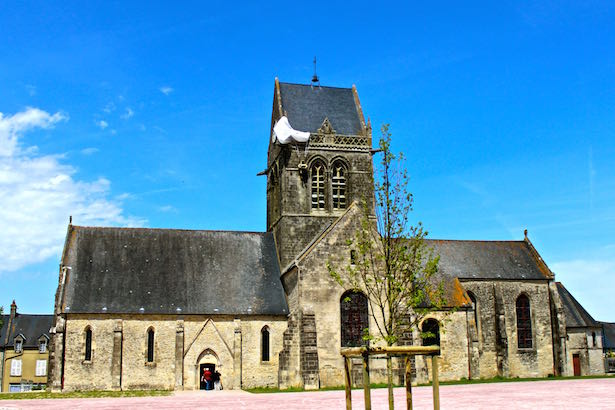 This town also has several museums including a CG 4 Waco glider, a C-47 transport plane, and a number of historical military artifacts which have been professionally displayed to commemorate and honor the D-day invasion.  You will be amazed when you touch the exterior of the glider (which is basically a tarp) and realize that they were used to transport soldiers across the channel and into Europe.

The highest point between Omaha and Utah beaches, Pointe du Hoc was the 100 foot cliff that the Rangers infamously climbed against the odds. 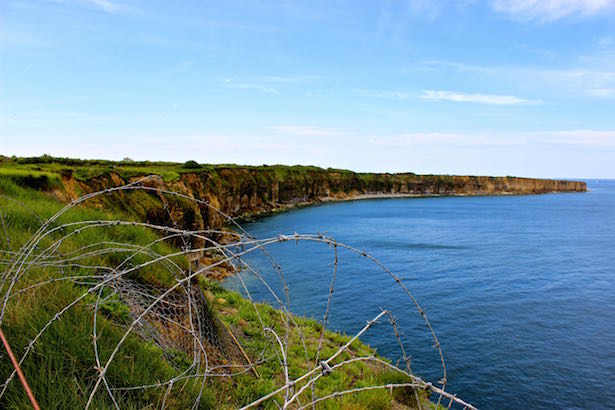 As we traveled the backroads, our guide pointed out the marshes that were flooded by the Germans to essentially drown the paratroopers landing in the dark with parachutes and lots of rope to tangle them. 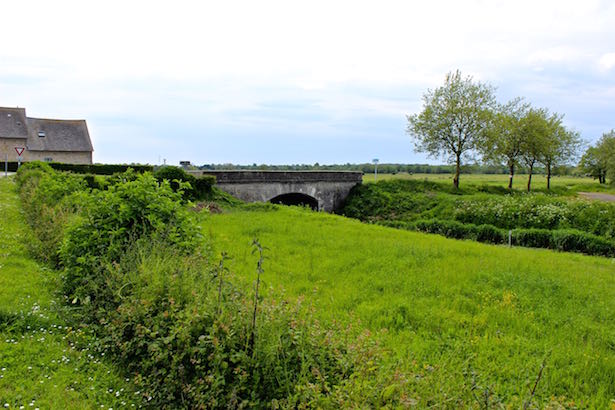 You will also see the tall hedgerows that line the properties essentially creating new battlegrounds with every property. Through the innovation of an American mechanic, they dissembled the big metal beach tank obstacle’s and attached them to the front of the tanks to bulldoze through the hedgerows.

Scattered throughout are bridges, museums and memorials from the Normandy invasion. 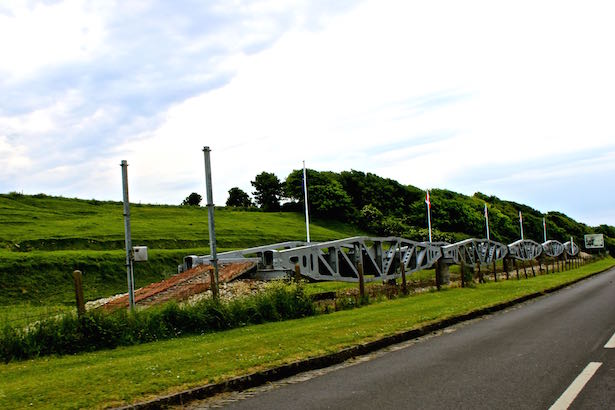 If you look closely at some of the homes, you will see military equipment used to rebuild structures now engrained in the new post-war landscape. 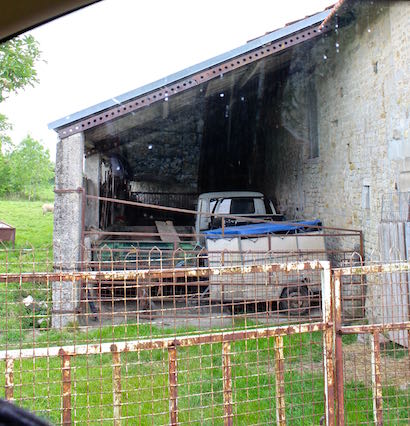 Utah Beach was the furthest west of the five beaches designated for the D-Day landings in June 1944. It was added by General Dwight Eisenhower to the original D-Day plan to ensure the early capture of the vital port of Cherbourg, so that vast amounts of equipment could be brought onto the European mainland. 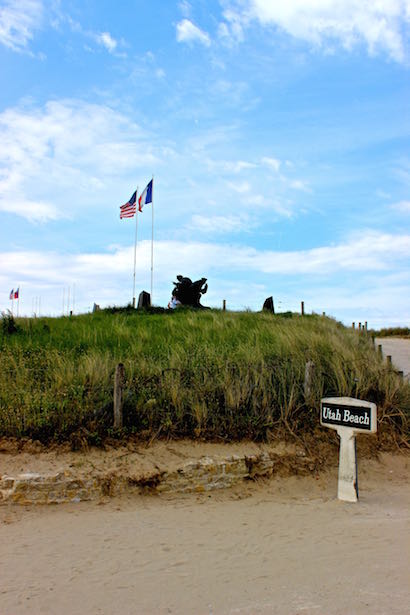 This 12th century church is where two medics, Bob Wright and Kenneth Moore, took care of 80 German and American wounded for over 72 consecutive hours following the initial hours of the jump into Normandy.  Wright and Moore were honored by the residents of this small village by a Memorial and a recently installed stained glass window in this famous church in commemoration of their life saving efforts. 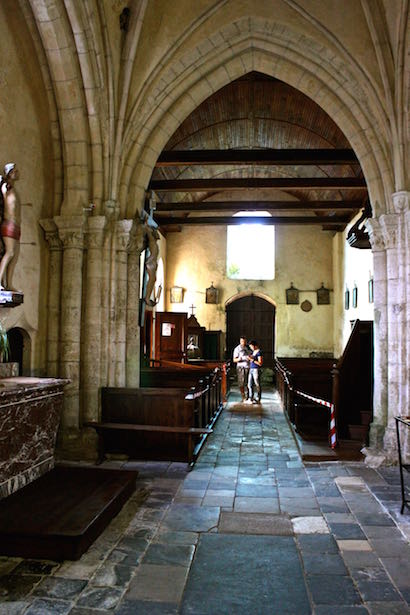 After the tour, I decided to go visit the German Cemetery.  It’s a stark contrast from the heroism of the American cemetery with its short black headstones.  Walking the graves, I was struck by the ages of many of the fallen – very young teenagers.  As you learn more about the war, you start to realize how a culture was brainwashed into German nationalism by an elite group that targeted youth. A good lesson in our society today. 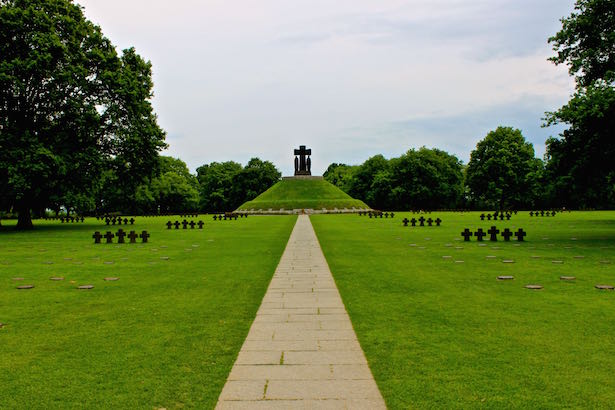 All throughout Normandy there is a warm welcome to Americans especially and locals have a great amount of pride is upkeep of the memorials. 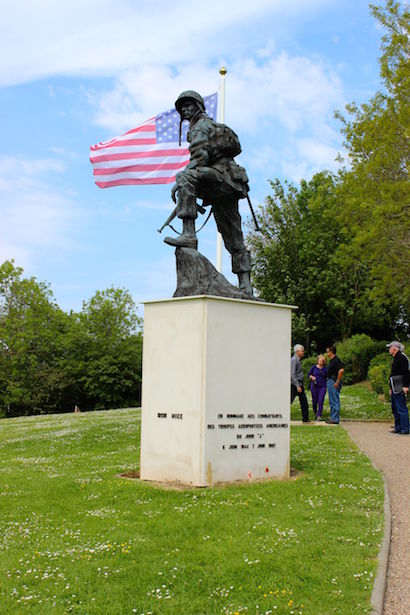 The complexity of the operation is really well-documented throughout many of the museums and murals at different sights and it takes some time to even start to put it all together. The Allies were “stuck” in Normandy for two months before they were able to start pushing the Germans back. D-Day however is a day to be remembered. Coming from an American perspective, I hope we all remember, be thankful and appreciate our American Freedom that has been attained with the lives and sacrifice of so many.

Private Tours: I would highly recommend hiring a private guide for your group. This is of course the most expensive option, but well worth it as the guides are passionate about D-Day and will tailor the tour for you. I did not use this option as I was traveling solo and unfortunately did not plan ahead of time as these private guides book up fast, but if I go back, this is what I would do.  I emailed back and forth with one of the top rated guides who gave me other recommendations in his circle of colleagues:

Group Tours:  This is the option I used. The company was well rated on TripAdvisor but the guide was absolutely horrible and we ended up complaining to the owner of the company and requesting a replacement guide (It was really bad on many levels). Fortunately, the rest of the group of 8 (from 4 different families) were former retired Military with family history to World War II and well knowledgeable on the sites and we learned from each other.  My day in Normandy is still one of my most memorable days thanks to Americans bonding together to pay respect to our heritage. It was a hard learned lesson in picking a tour – look not only at the company but at the individual guides for reviews.  It was a lot of time and money wasted.  My goal on this site is never to harm so I don’t want to “slam” the company – if you email me though I will steer you clear of this tour guide.