The island of Hvar is a hot-spot for vacationing in the Croatian Dalmatian islands with clear-blue water, a fort to explore, and a sizzling night-life. 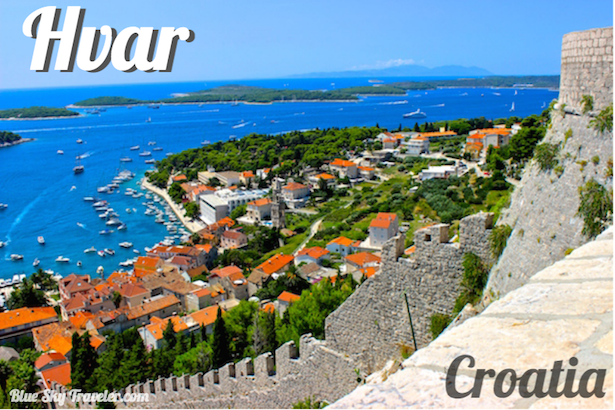 A short ferry ride from Split and I arrived in Hvar Town on the island of Hvar to explore the town and swim in the clear-blue water.  First on the exploration was climbing up to see the fort. 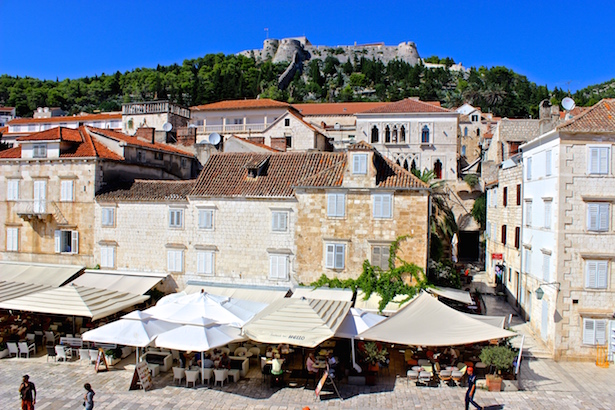 The path to the fort is through terraced streets from the Hvar Town center.  There are lots of shops, small terraces (some with churches) along the way with homemade Hvar jewelry and crafts and a chance to catch your breath. 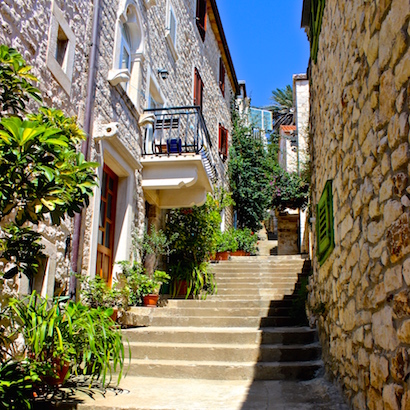 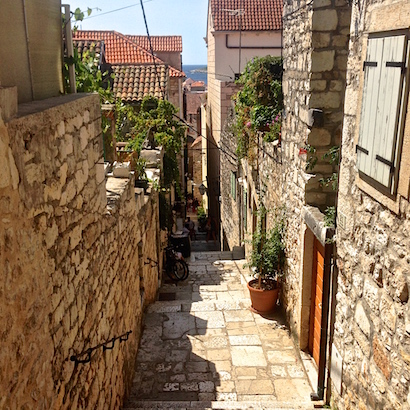 The forts foundation stand on both a 1st millenium BC Illyrian fortification and a 6th century AD Byzantine citadel. Construction of the current fort began in 1282 under Venetian rule of the island of Hvar. The fortress was finally complete in the 1551 when it received the Venetian Coat of Arms above the southern gate. 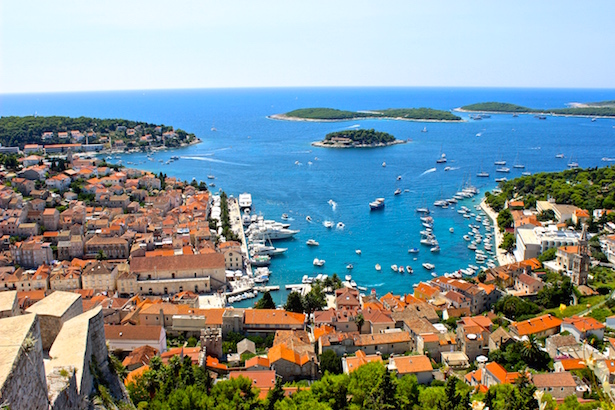 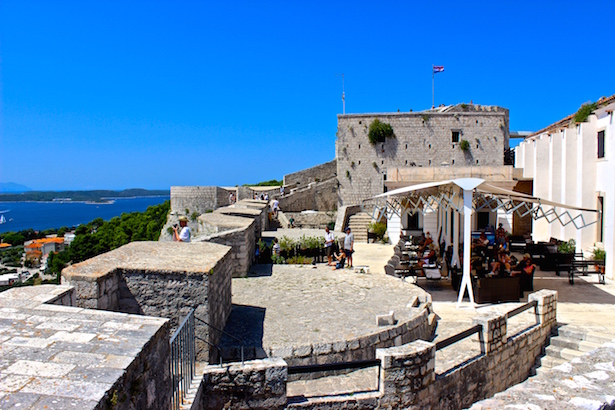 The Venetian’s and Turkish were in constant conflicts during the 16th century.  Hvar was sacked by the Turkish in 1571, though the fortress saved the townspeople who found shelter within the fortress. 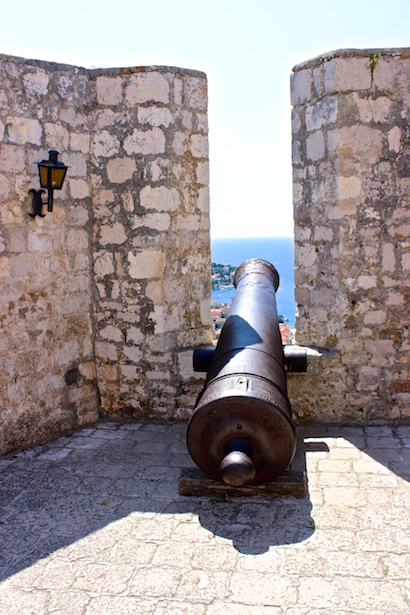 Just as the town was being rebuilt, it suffered further damage in 1579 as lightning struck the gunpowder magazine in the fortress. Many of today’s public buildings in Hvar date from the reconstruction following the explosion.

The fort is named Španjola as Spanish military engineers took part in the construction.  In the 19th century, Hvar lost its strategic importance as a port for the Austrian Navy and was left abandoned. The local lore says that it was left “for the fairies to dance in at night” – or that might be what you see from drinking the very potent Rajika.

Returning down the hill to the city, the main center of town is St. Stephen’s Square. 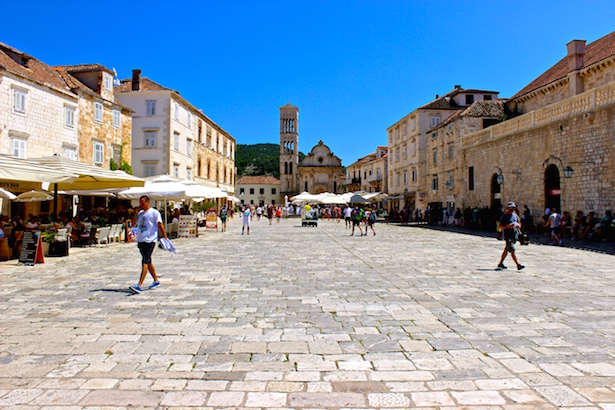 As I walked in, my first thought was that the Romans must have been on this island 2,000 years ago as in Pula and Split as it looks like a Roman Forum. However, the square was actually built starting in the 13th century and completed in the 15th century by filling in an inlet from the bay. 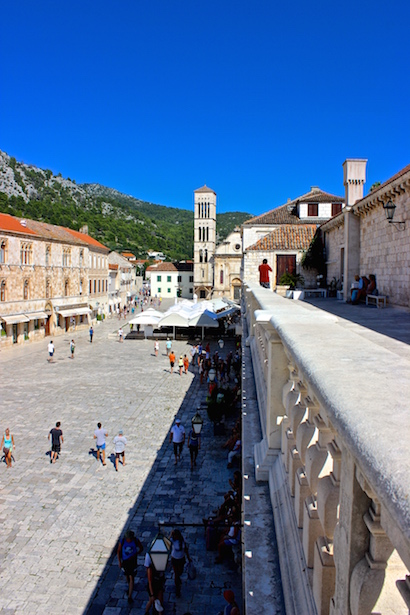 This waterfront area is also where the glamorous yachts pulled up with mega-rich. Hvar has become a hot-spot for celebrities and a very hot nightlife for parties. 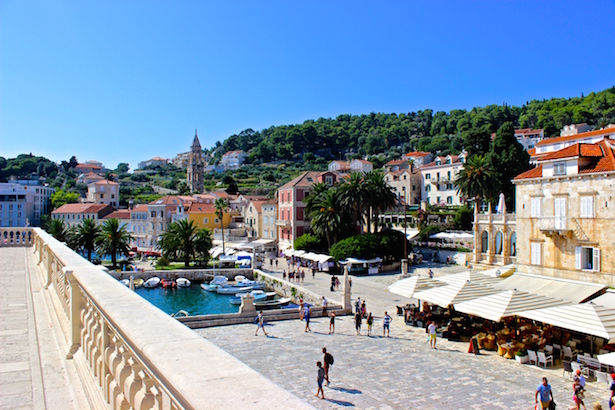 The streets of Hvar meander up the hills from the main St. Stephen square. Wandering these white stone alleyways that splinter into more stairways up is a great way to escape the 20,000 per day tourists that ferry in to explore the island. Hvar Town has a population of ~4,000 for comparison. 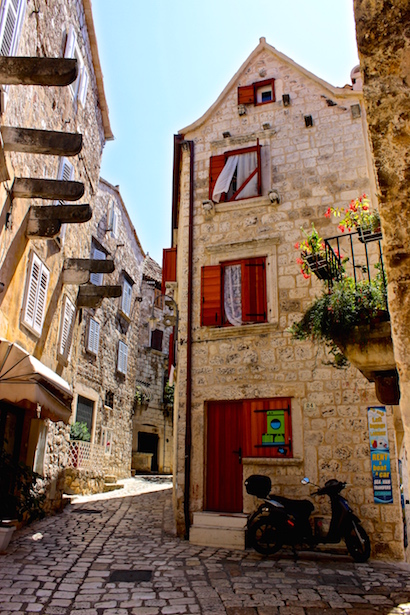 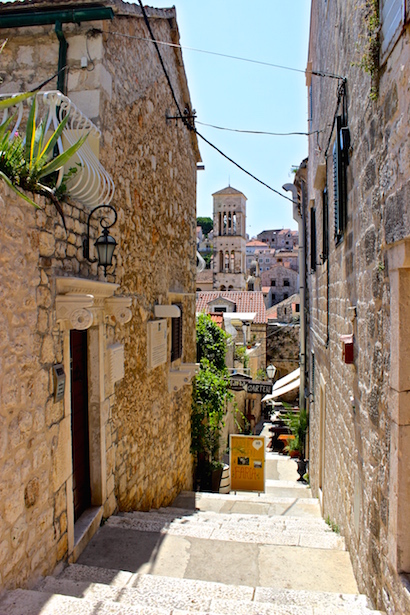 The white stone of the city streets and buildings is a sight to see.   Someone detailed to me that the Hvar and neighboring island Brac stones were used in the building of the White House.  While I love a good myth and story, one of my biggest pet peeves – fabled history facts so I jumped on the inter-webs to do a little research. I might believe there is a Hvar/Brac stone in the Washington monument… if you ride the elevators, you will see that many countries donated a ceremonial stone.. but not the white house which was quarried in the USA. Turns out, a NY Times journalist incorrectly published an article stating this.  The story was corrected but the distribution of this info remains.

The local stones were quarried to build the Diocletian’s Palace in Split and many of the buildings in Dubrovnik. 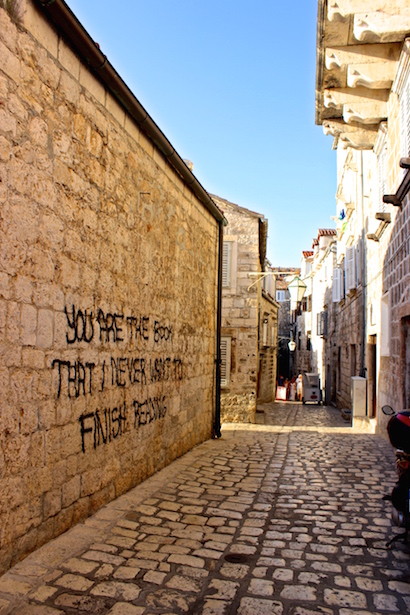 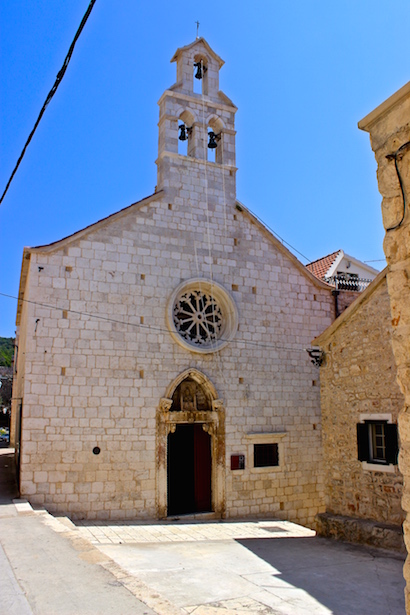 Fun in the Sun

On either side of the town are areas for swimming and resorts, which besides the night-parties is really the attraction of Hvar. The water could not be more crystal clear and the perfect temperature. 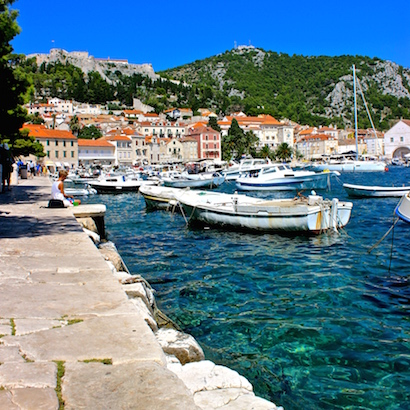 I wish I had my tele-photo lens for this one. Check out the guy in the middle of the waterfall “sprawled” over it. I think he wins the day for enjoying the sun the most. 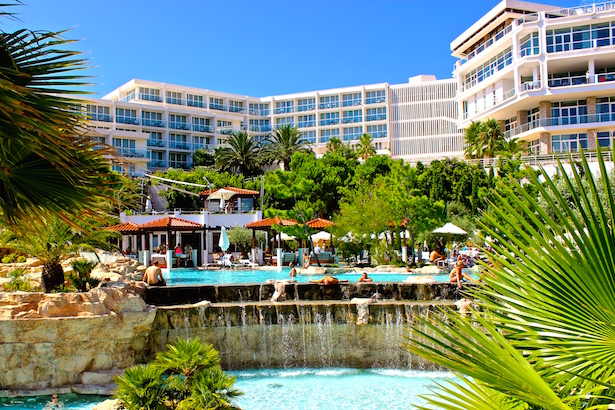 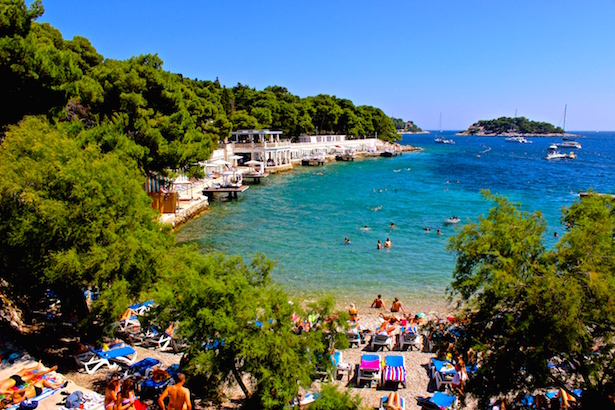 Croatia in general is all about the sunsets over the clear blue waters. Hvar was no exception. 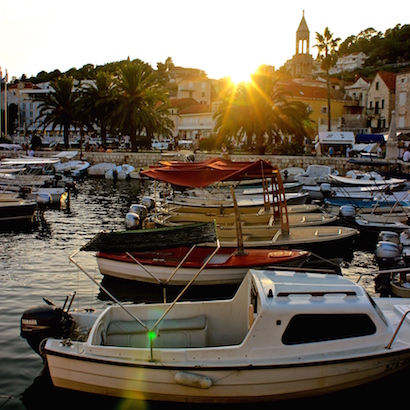 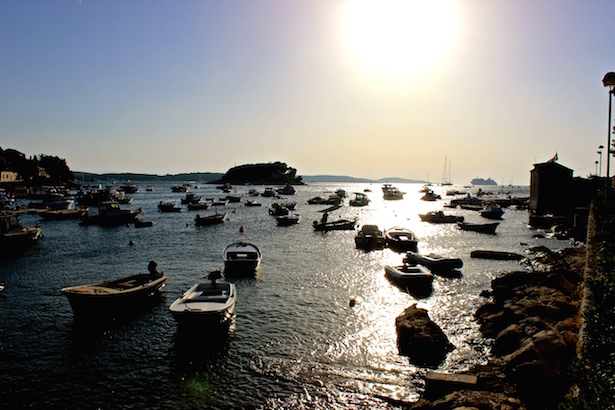 A great day in Hvar – exploring Croatian Island Life.  This was only Hvar Town. There are a few other areas on Hvar Island  including Star Grad Hvar – a UNESCO site that is just 30 minutes away. 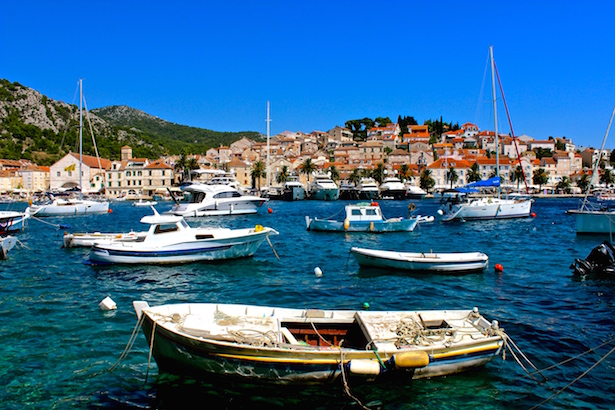 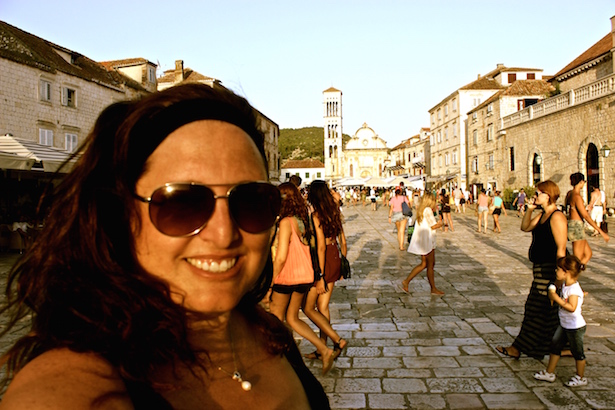 A few pics from the ferry ride back to Split with interesting finds.  These are through the ferry plexiglass so a little blurry

This is one of the ships passing by – beautiful – I wish the sails were up. 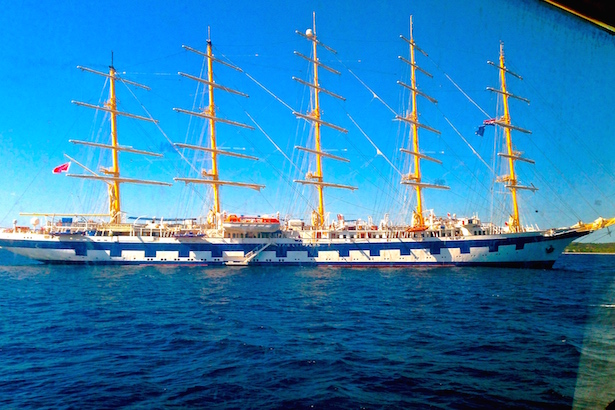 This is what overpacking backpackers looks like. I call them pregnant hunchbacks. WOW! That is all. 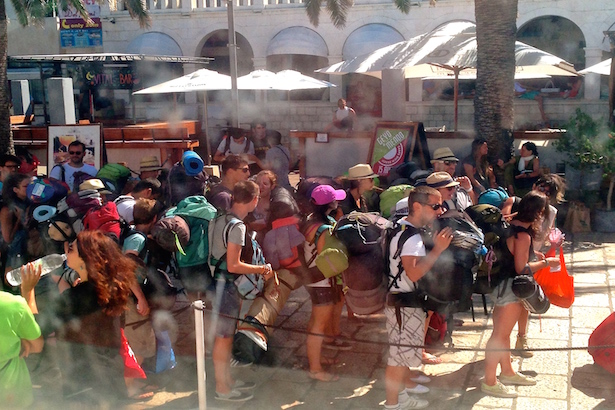 Is Hvar Croatia on your bucket list?
If you have been, tell us your tips and favorite adventures. 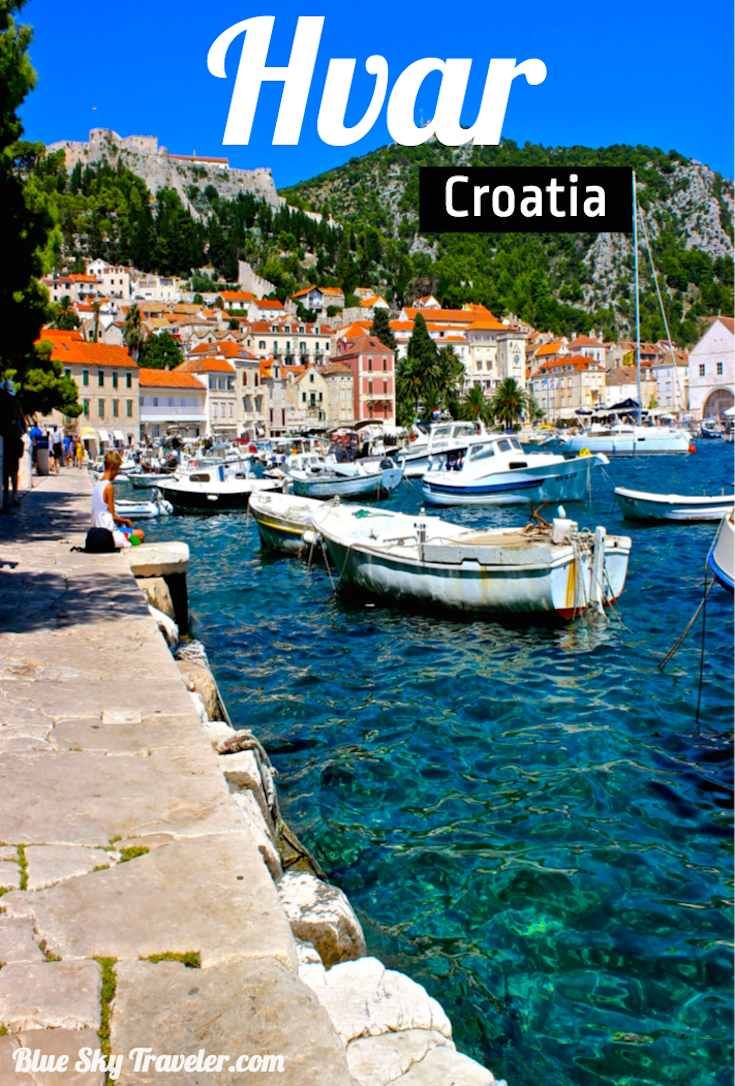 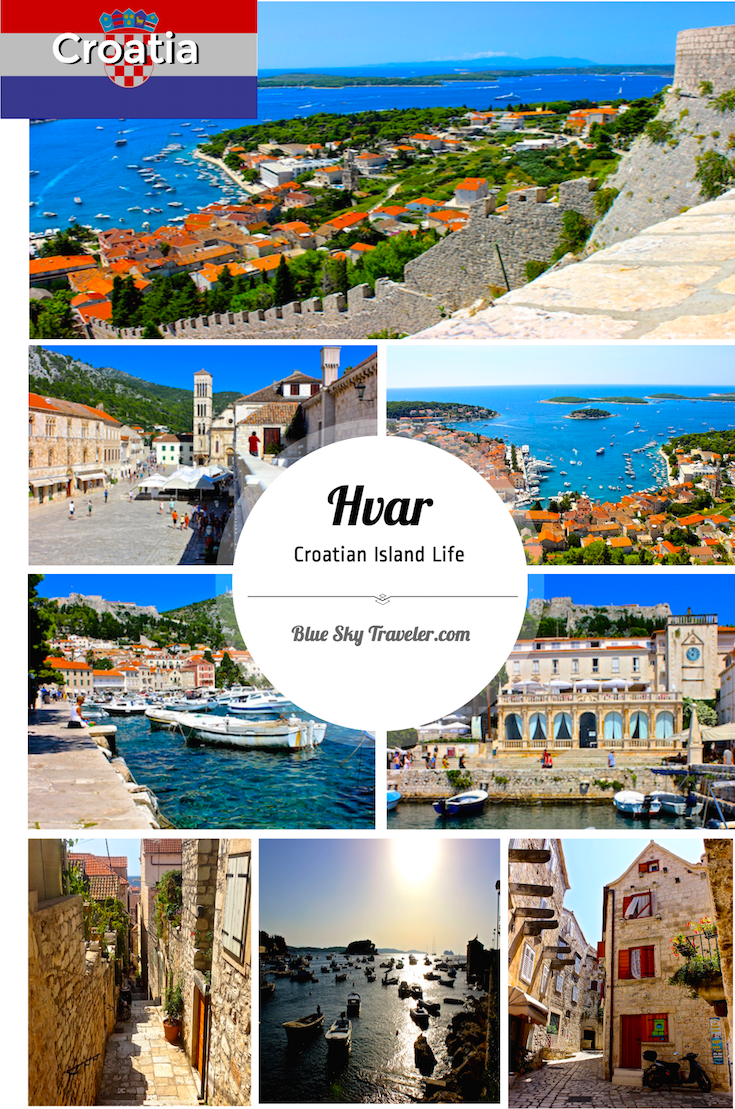