Korčula, a beautiful medieval town in the Adriatic, is a favorite destination to soak up the Croatian sun, kayak in the beautiful clear-blue waters and eat some fresh seafood with gorgeous sunsets. Perfect Day on your Croatian Holiday!

Travel to Croatia is an unforgettable experience. The Croatian coast has 1,246 islands and 47 of those are inhabited. Korčula, pop ~16,000, is one of the islands (29 miles long by 5 miles wide).  There are a few towns on this island but the most visited (and my visit on my Croatian Holiday) was to the town of Korčula, pop ~4,000, which is on the Jadrolinja Split-Hvar-Korčula-Dubrovnik ferry line, the easiest way to travel in Croatia on the coast. 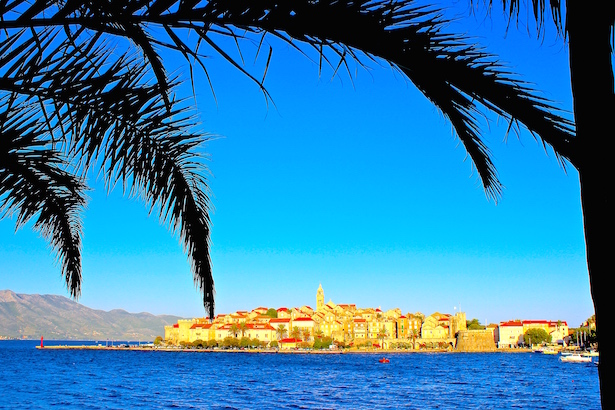 Korčula’s history is long. According to legend, the island was founded by Trojan hero Antenor in the 12th century BC who is also famed as the founder of the city of Padua, Italy.  From there you have centuries of migrations: Mesolithic, Neolithic, Greeks, Romans, Illyrians, and finally Slavic  migrations in the 6th century. 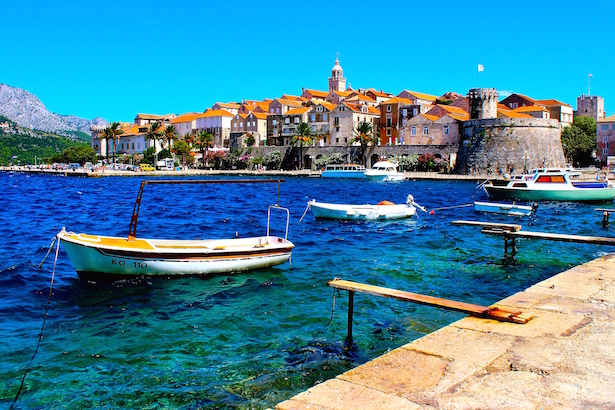 Then… it gets even more complicated.   This little island was at the crossroads of so many empires and regime list includes: Byzantine, Serbian Kings, Bosnian Kings, Princes of  Krka (the Šubićs), Counts of Korčula, Venetian Republic, French Empire, Republic of Genoa, Kingdom of Hungary, Austria Hapsburg Monarchy under Republic of Dalmatia, Republic of Ragusa (Dubrovnik), Holy Roman Empire, Montenegrin forces in conjunction with the Serbian Empire, Kingdom of Italy, Kingdom of Serbs, Croats & Slovenes, Kingdom of Yugoslavia, Axis Occupation, Yugoslav Partisans, Yugoslavia, Republic of Croatia with attacks by the Ottoman Empire and Russian forces.

As you stroll the streets and the few museums, there are little tidbits of different cultures everywhere. One of the discoveries was that the city’s Town Statute dating back to 1214 prohibited slavery.  Bravo Korcula! 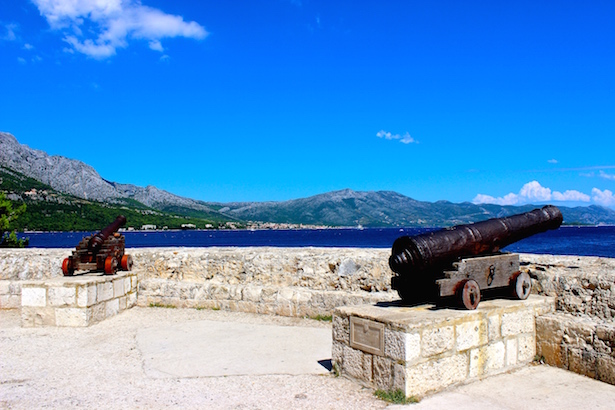 The longest rule was by the Venetian Republic from 1420 – 1797 and much of the architecture seen in the city has the Venice stamp.

Unlike most medieval towns that evolve over time with twists and turns, Korčula is a planned grid resembling a fish skeleton.  The streets on the West are straight to northwest Maestral winds into town that cool the town. The streets to the East are curved to keep out the strong Jugo winds.

Building outside the walls was forbidden until the 18th century, so the center is interestingly compact. All of Korčula’s narrow streets are stepped with the notable exception of the street running alongside the southeastern wall. The street is called the Street of Thoughts as one did not have to worry about the steps. 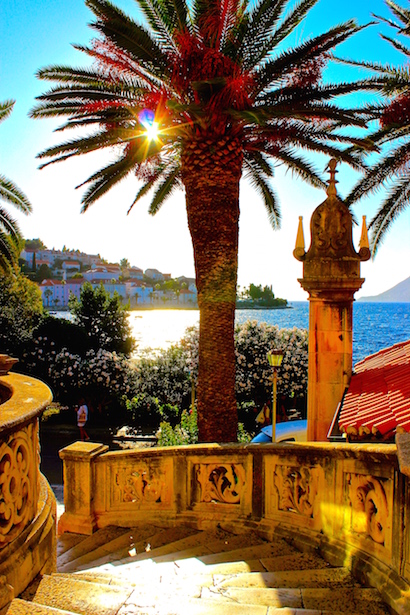 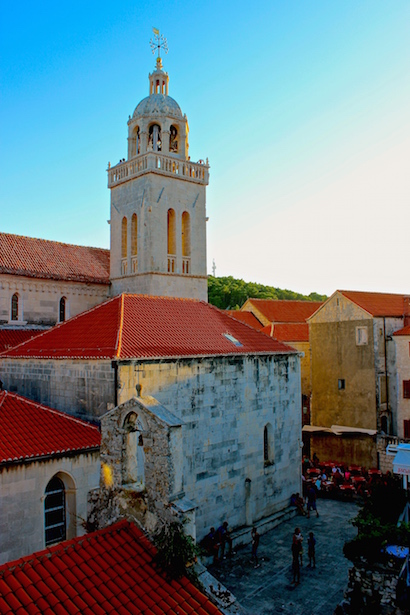 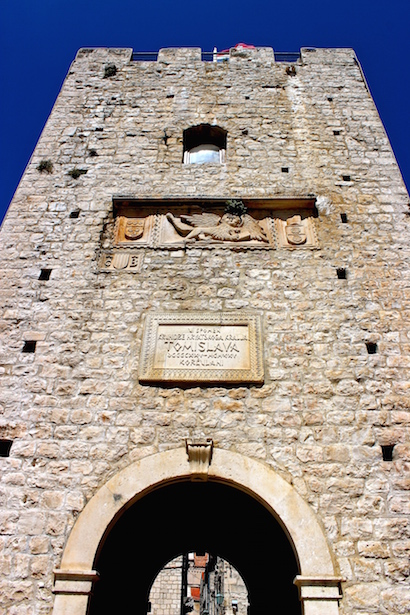 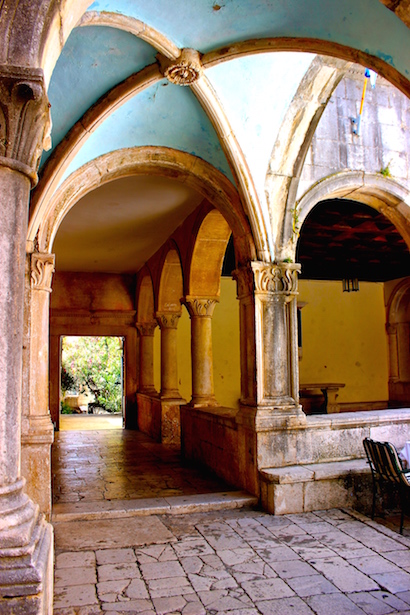 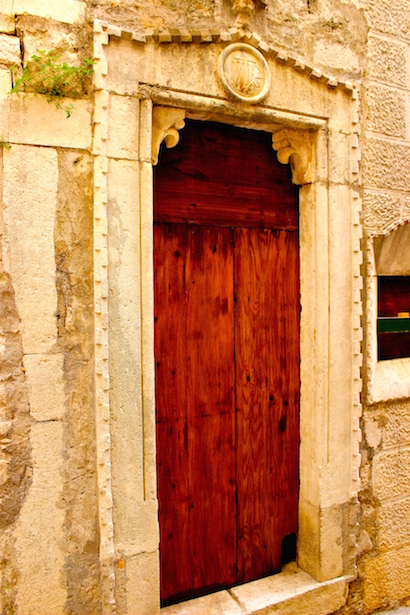 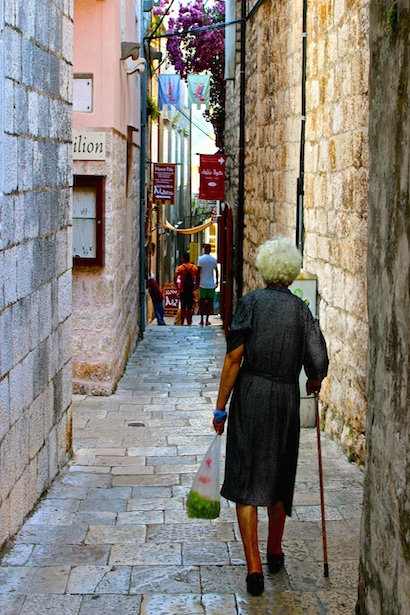 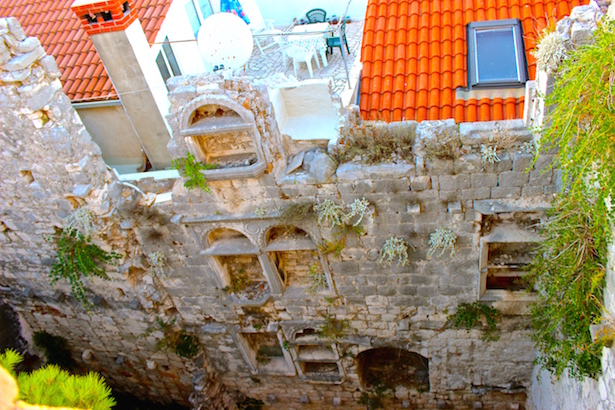 Korčula is the much-debated but claimed birthplace of Marco Polo.  I had to jog my memory for Polo’s history beyond the swimming pool game which no-one really knows how it came to be called Marco Polo.  Marco was born in 1254 and at the age of 17, he traveled to China with his father and uncle. They stayed for 24 years where Marco worked in the court of the Mongolian Emperor Kublai Khan as an adviser. 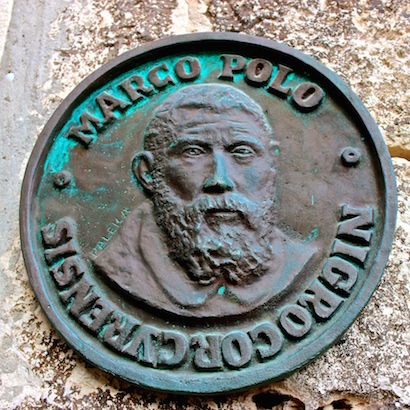 In 1298, Marco returned to Korčula and fought in an important naval battle for Korčula controlled by Venetian Republic against the Republic of Genoa. Marco Polo was captured, taken to Genoa, imprisoned and told his story to a cellmate – who published his tales in the book “Il Milione”.

Though other Europeans had been to Asia, Marco Polo’s book became the documentary  and provided many interesting facts about China and other Asian countries. It is said to have inspired Christopher Columbus and many other travelers.  This account also influenced the making of the 1450 Fra Mauro map considered the greatest memorial to medieval cartography. This European map marked the end of biblically-based geography in Europe and starts to embrace a more scientific way of making maps, putting accuracy in front of religious or traditional beliefs.

Moreška is a traditional sword dance in Korčula that arrived in the 16th century. Sword dances originated in Spain in the 12th century and tell the story of the Moors’ explusion from Christian Aragon (Spain) recounting the Middle Ages Reconquista. The Korčula Moreška changed over time to the Turks vs Moors and then today’s version of White vs Black.    The Black King enters with a maiden but she is in love with the White King (wearing Red). A battle ensues with the sword dance.  The White King is victorious and gets the girl. 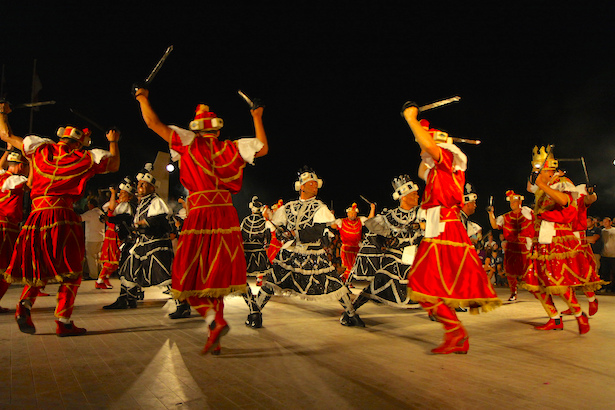 My favorite adventure on Korčula was renting a kayak for the day paddling out to many of the uninhabited islands.  The island could not be more relaxed as the kayak owner did not have me sign anything. He took my ~8 euros and said be back by nightfall – if not, it was an island and he would find me. Ha!   On one of the islands is the Badija Franciscan Monastery that has one restaurant.  The owner greets everyone personally and also orders for you. His fisherman had just caught some squid, that he showed me, and he cooked it up fresh. The best grilled calamari I have ever had.  Kayaking back was a bit of a trek with the waves, but a great day on holiday in Croatia. 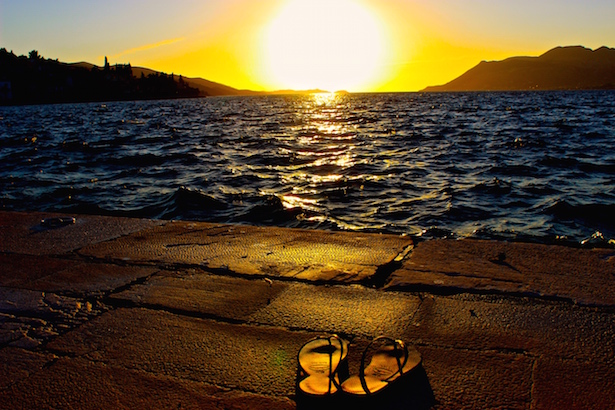 While many other Croatian cities have many historical sights, Korčula for me was rest and relaxation in the Croatian sun.  The town was the perfect size for a quick exploration and great seafood and a home-base for some water adventures. 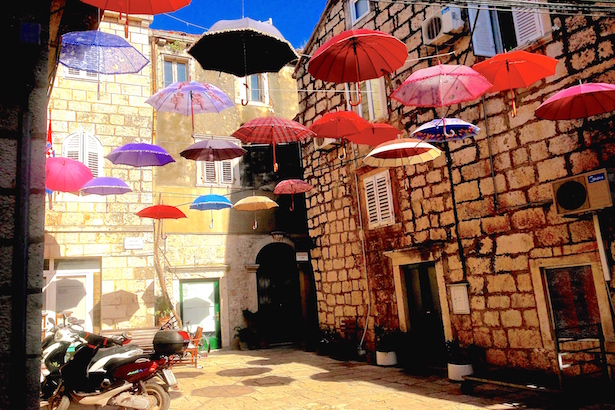 Korčula ranks as one of my top 5 small towns to just enjoy. 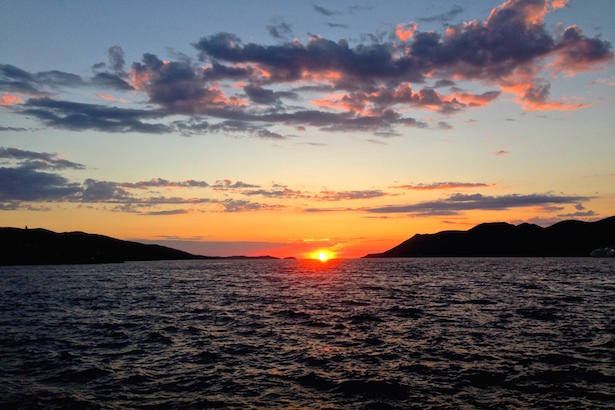 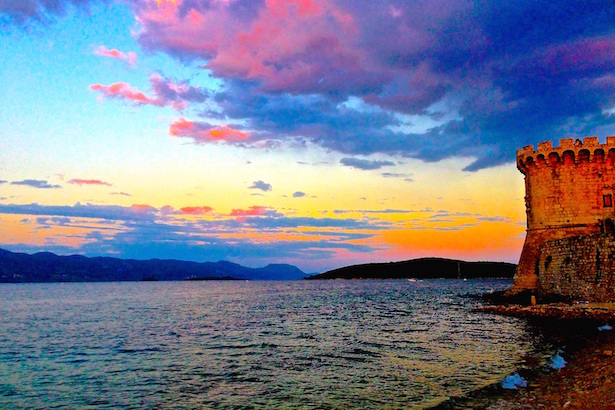 [vision_content_box style=”sky-blue” title=”Tips”] [vision_vector_list][vision_list_item icon=”fa-info-circle” color=”#51A6E0″] Croatia’s beaches are quite rocky, so it is imperative to wear the correct footwear. If you plan to swim, wear shoes or swim fins in the water–there are many sea urchins![/vision_list_item][vision_list_item icon=”fa-info-circle” color=”#51A6E0″] The Jadrolinja ferry is your best bet to get here in the summer months.  Leaving on a Sunday was a bit more tricky and I used a private small-group transfer to Dubrovnik (boat and then a van) through the Transportation services in the main square. Off-season options are a little more sparse.[/vision_list_item][/vision_vector_list][/vision_content_box]

Is Korcula Croatia on your bucket list for your Croatian Holiday?
If you have been, tell us your tips and favorite adventures. 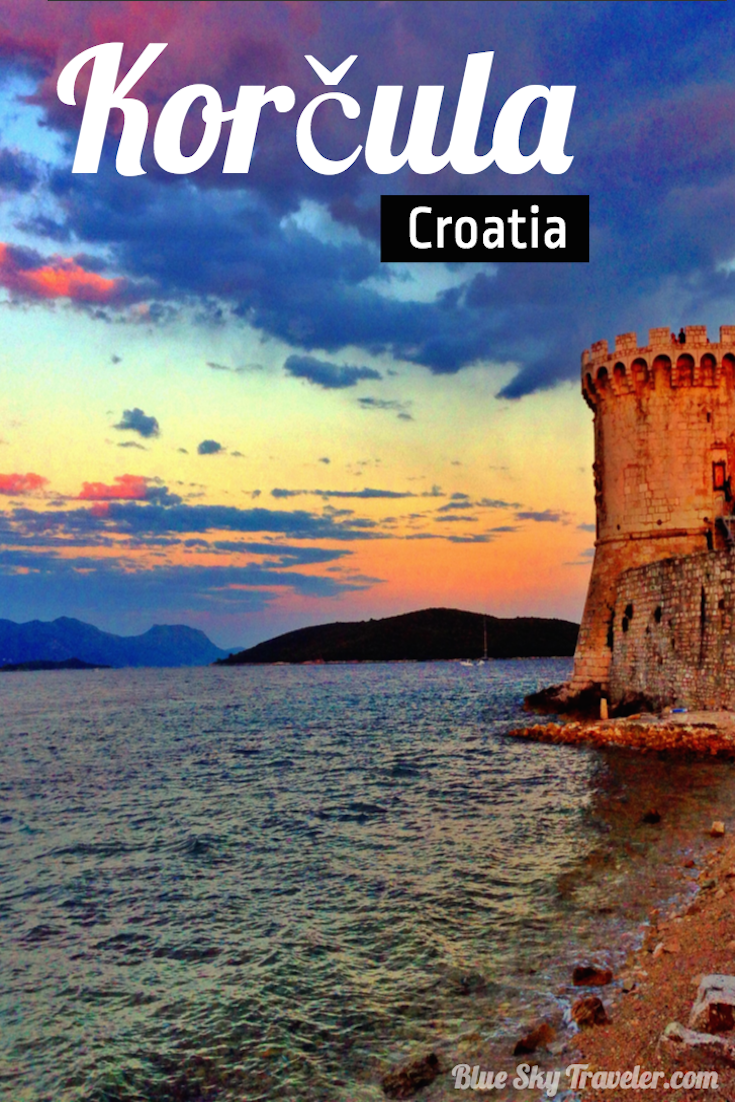 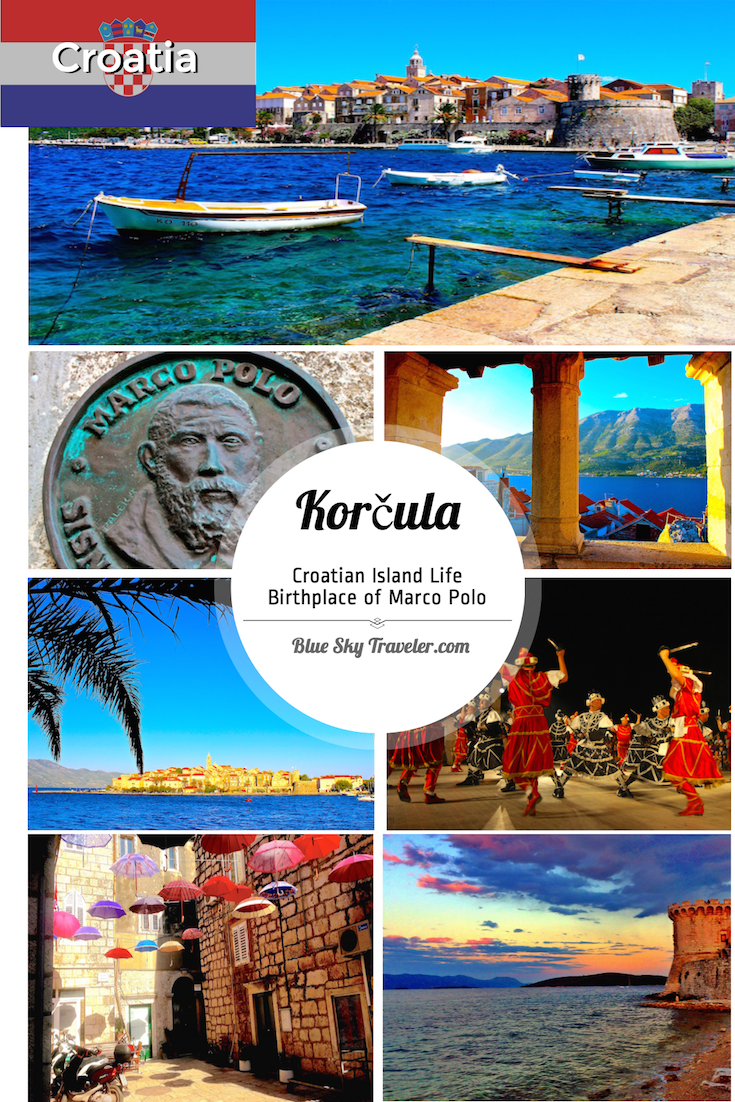